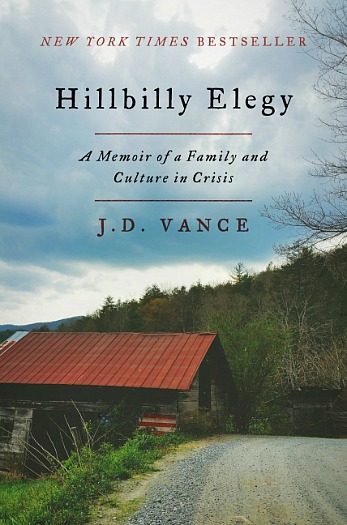 Single Sentence Summary: J.D. Vance tells the eye-opening story of his life growing up poor in a working-class community, within a culture in crisis.

Primary Characters: This is a nonfiction book about the life of the author, J.D. Vance, and his extended family. This includes his mother, sister, grandparents, and aunt, all of whom left their roots in Kentucky’s Appalachia area for a “better life” in Middleton, Ohio.

Review/Synopsis: In Hillbilly Elegy J.D. Vance has two primary areas of focus that are tightly woven together. First, is the fight of the working-class white in America who are year by year falling further down the economic ladder. Next, is his own amazing story, and that of his family and the struggles they all faced. It’s about the chaos that was his life.

Woven throughout this book are facts about what a little know class of Americans’ lives are really like. When we think of poor, we typically think of people living in the grit of inner city housing projects, or the rural poor, getting by on next to nothing. But, Vance shows the reader that there are kinds of poor we never really think about: suburban poor. He does this with some facts and figures, but more by painting a picture of what being poor in a slowly disintegrating culture is like. From the very beginning the author lets us know that his book is about something else:

“…..what goes on in the lives of real people when the industrial economy goes south. It’s about reacting to bad circumstances in the worst way possible. It’s about a culture that increasingly encourages social decay instead of counteracting it.”

Vance tells with brutal honesty how often times this class of poor is its own worst enemy. He brings into focus how difficult it is for people to find hope for improving their own lives and finding a way out of the spiral of poverty.

While learning about the realities of the working-class poor was enlightening, it was really the story of Vance’s life that I loved about Hillbilly Elegy. He lovingly told his readers about the hillbilly culture that followed his family from Kentucky to Ohio: the good parts, the bad parts, the ugly parts. Vance’s grandparents had fled Kentucky for a better life in Middleton, Ohio where factory work was easy to get. They largely succeeded in bringing their family up to the middle class. Yet, the attitudes and habits of the culture were still pervasive in many of Vance’s family members and in the community where they lived.

Vance’s relationship with his drug-addict mother was always troubled and often very disruptive to his life. Without his older sister, his aunt, and his grandparents, Vance would not have been able to make his life the success he did.

“…despite all of the environmental pressures from my neighborhood and community, I received a different message at home. And that just might have saved me.”

His family believed in J.D. more than he believed in himself, and they always encouraged him to stay in school and make something of himself. They were there for J.D. when he was at his lowest points. I loved seeing how Vance overcame his upbringing to graduate from law school at Yale, but how even after all that success, he is still a part of the hillbilly culture in which he grew up. And, more importantly, he still embraces and values that culture. Grade: A-