The theme of today’s Top Ten Tuesday, created and hosted by The Broke and the Bookish, was a little on the difficult side for me. The theme is books newly added to the ever-growing to-be-read list. My first instinct was to jump to books coming out next year since I’ve been adding those like crazy! Instead, I decided to focus on just a couple upcoming books, and more on books that we all can get and read right now, before the end of the year! 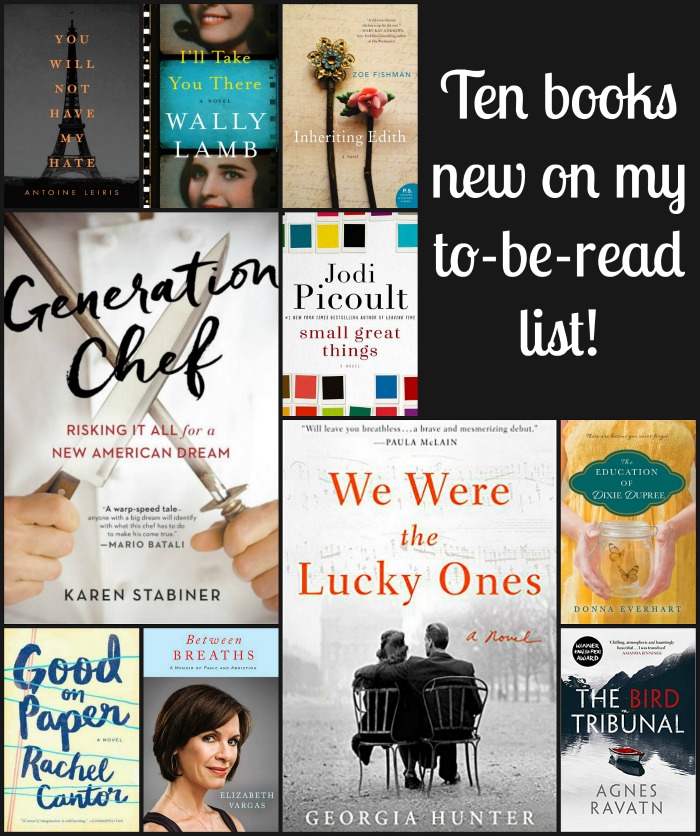 Between Breaths by Elizabeth Vargas – A memoir that made it onto my to-be-read list after reading Allison’s review on The Book Wheel. It looks to be a powerful account of Vargas’s struggle with anxiety, alcohol, denial, and guilt. I think it takes a lot for a public figure to so openly discuss her flaws. I’m anxious to read this book for myself.

The Bird Tribunal by Agnes Ravatn – This is a book I kept hearing about and an actually reading right now. It’s a short little psychological thriller centered on a woman who’s taken a job as a housekeeper. The man she works for turns out to be not at all like what she expected. They both have secrets. It would be perfect for consuming in a single evening curled up on the couch with a fire going!

The Education of Dixie Dupree by Donna Everhart – I became interested in this debut novel after reading Annie’s review on The Misstery. It looks like a great, but sometimes-difficult story set in the south. The narrator is an eleven-year old girl who chronicles the abuse and unhappiness surrounding her family.

Generation Chef by Karen Stabiner – Now that we’re in the midst of nonfiction November, I’ve seen this book on several lists of new nonfiction and it definitely has me interested. My younger son is a chef, so I know how hard that world is and am really interested in hearing about it from the female perspective.

Good on Paper by Rachel Cantor – I first came across a review for Good on Paper on Instagram, where I read a review by Grace at CuriousBookReviewer. This appears to be a fun novel about a woman trying to change her life while working to translate a book that may, in fact, be untranslatable. I had seen this book earlier in the year, but not really considered it until now.

I’ll Take You There by Wally Lamb – This novel comes out in a couple of weeks and I’m very curious about it. I’ve had mixed feelings about Wally Lamb books – loved some, didn’t like others. I’ll Take You There, about a film scholar reflecting on the women in his life, sounds like it just might wind up on the love side!

Inheriting Edith by Zoe Fishman – This book just intrigues me! I haven’t read a lot about it, but I love the premise. A woman inherits a beautiful home from her wealthy employer, but there’s a catch. With the home, comes caring for the employer’s 82-year old mother, Edith. It just strikes me as a recipe for some fun.

Small Great Things by Jodi Picoult – I’ll probably be shunned for saying this, but I’ve never been a huge Jodi Picoult fan. I read several of her early books and enjoyed them very much, but gradually grew a little tired of them. I haven’t read one in many years, but Small Great Things, about an African American L&D nurse told not to touch the child of white supremacists, has me putting Jodi Picoult back on my to-be-read list. Check out Catherine’s review on The Gilmore Guide to Books.

We Were the Lucky Ones by Georgia Hunter – I have a serious thing for World War II novels, so when I first saw Sarah from Sarah’s Book Shelves mention this book by her friend, Georgia Hunter, I had to investigate! This story of a Polish family trying desperately to both survive and reunite, after being separated at the start of the war sounds right up my alley! A debut novel, We Were the Lucky Ones, is being released on February 14th.

You Will Not Have My Hate by Antoine Leiris – Many of you will remember this author’s poignant letter written to the terrorists responsible for the Paris bombings last fall. In it he spoke of losing his wife and being left with a young son who would never know her. But, he also spoke of his refusal to allow terror win and his commitment to living a life of happiness and freedom. You Will Not Have My Hate is Leiris’s account of how he and his son endured the days and weeks after his wife’s murder.

Disclosure: There are Amazon Associate links included in this post.