You might remember that last month I reached a bit of a crisis point (or as much of a crisis point as books can cause!) when I realized that the quality of books I’ve been reading seemed to have deteriorated. I wrote about it in my post Heading Down the Rabbit Hole With Books. One of the “fixes” I talked about there was to DNF books more often and sooner. That can be a challenge for me because I often feel like if I read one more chapter the book will suddenly become amazing. Not finishing a book is a skill I’m still working to get better at. Despite that, I didn’t have much trouble coming up with ten recent books I just couldn’t finish. 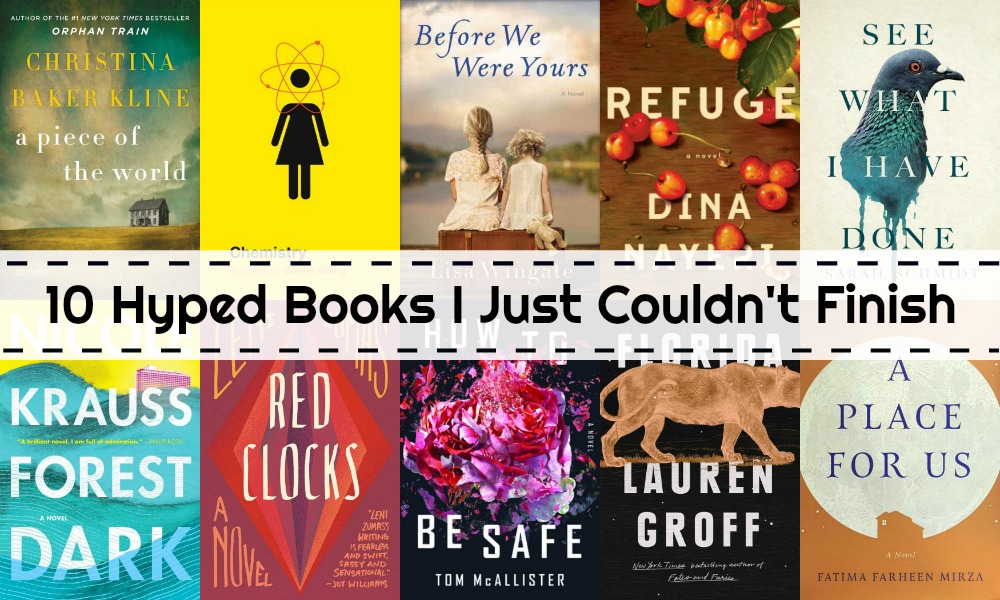 A Piece of the World by Christina Baker Kline – I loved Baker’s previous book, Orphan Train, but A Piece of the World just dragged for me. The premise of a story was right in my wheelhouse: historical fiction, about a woman, art. But in the end, none of that mattered. It was just too slow.

Chemistry by Weike Wang – I’m drawn to quirky debuts like a bee to honey, but unfortunately there was just no chemistry between this debut and me. My dislike was so strong that I think I’d have a hard time trying another novel by Wang.

Before We Were Yours by Lisa Wingate – Dual timeline stories can be tricky and Before We Were Yours is a perfect example of that. The story in the past was great and I wanted to keep going with it, but I just couldn’t stomach the modern day part of this novel. It felt forced and fake and is why I quit on this one.

Refuge by Dina Nayeri – Refuge was one of my most highly anticipated novels of last summer and perhaps my biggest disappointment. I had expected a book centered on relationships, but there was so much else going on in Refuge that those quickly became lost for me.

See What I Have Done by Sarah Schmidt – I’d looked forward to this debut for months, but even before I tried it I’d begun to see some really mixed reviews. That may have tainted my feelings. I hope not, but I did quit early on this dark reimagining of the Lizzie Borden murders.

Forest Dark by Nicole Krauss – Forest Dark was on so many “best of fall” lists last year and I was eager to read this story of two unlikely strangers who meet in Tel Aviv. Despite a valiant effort on my part, I just couldn’t care about either of the main characters in this book.

Florida by Lauren Groff – I’ve mentioned this HIGHLY anticipated collection of short stories several times recently, so was a little disappointed in myself when I couldn’t make it past the third story. This may be less of an indictment on the collection and more of a reflection on me and short stories. I had a similar reaction to Curtis Sittenfeld’s You Think It, I’ll Say It.

A Place For Us by Fatima Farheen Mirza – Not out until next week and I’ve already quit on A Place For Us. I’m feeling very iffy about my decision, so look forward to seeing others’ opinions. I could be convinced to pick it up again, but for the time being this book was too much of a character study and not enough of a story for me.

Have I made mistakes? Are there books on this list I should give another try?