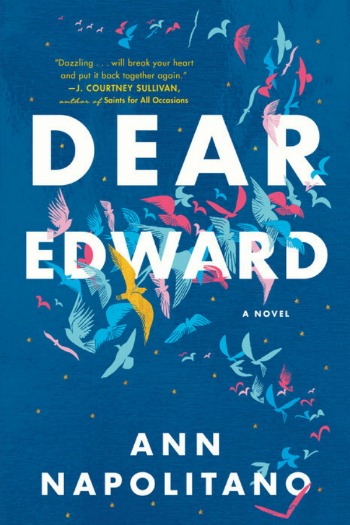 Twelve-year old Edward has no idea how to live a life in which he’s the only survivor of a devastating plane crash that took his whole family along with everyone else aboard.

“One summer morning, twelve-year-old Edward Adler, his beloved older brother, his parents, and 183 other passengers board a flight in Newark headed for Los Angeles. Among them are a Wall Street wunderkind, a young woman coming to terms with an unexpected pregnancy, an injured veteran returning from Afghanistan, a business tycoon, and a free-spirited woman running away from her controlling husband. Halfway across the country, the plane crashes. Edward is the sole survivor…”

I really enjoyed this tough story of survival, and learning to live anew without completely letting go of the past. At 12-years old Edward found himself an unwilling traveler on this journey through a life he never wanted to live. By shear luck he survived a plane crash that should have killed him, but instead left him alive, and without those he loved most. Edward’s aunt and uncle gave him a home and their hearts, but his void remained too large to fill.

I loved that as much as everyone wanted to, and tried to help Edward, he finally had to find his own way. Without really knowing he was doing so, Edward eventually uncovered the things that would allow him not exactly to move on, but to move forward. I thought Napolitano did an especially great job with this part of the story and the almost philosophical takes Edward eventually came to feel about all the lives lost around him. Dear Edward is a book that will move you in unexpected ways and have you rooting for this boy who lost everything and had to find a way to survive that. Grade: B+

Note: I received an electronic copy of this book from The Dial Press (via NetGalley) in exchange for my honest thoughts.