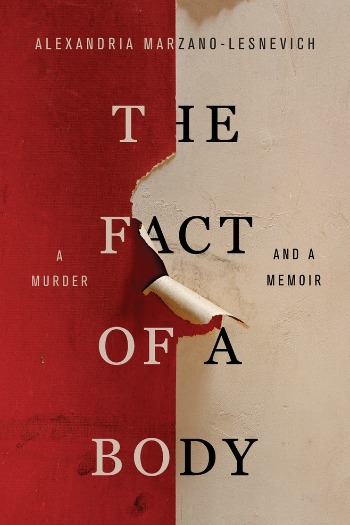 The Fact of a Body: A Murder and a Memoir by Alexandria Marzano-Lesnevich
Publisher: Flatiron Books
Release Date: May 16, 2017
Length: 336 pages
Buy on Amazon

Single Sentence Summary: The anti-death penalty convictions of a law student are put to the test when the first case she interns on stirs memories of abuse in her own past.

Primary Characters: The Fact of a Body is a nonfiction investigation of murderer Ricky Langley’s life and crimes. It’s also a memoir of the largely hidden abuse suffered by the author at the hands of her grandfather.

From the Publisher: Before Alexandria Marzano-Lesnevich begins a summer job at a law firm in Louisiana, working to help defend men accused of murder, she thinks her position is clear. The child of two lawyers, she is staunchly anti-death penalty. But the moment convicted murderer Ricky Langley’s face flashes on the screen as she reviews old tapes―the moment she hears him speak of his crimes — she is overcome with the feeling of wanting him to die. Shocked by her reaction, she digs deeper and deeper into the case. Despite their vastly different circumstances, something in his story is unsettlingly, uncannily familiar.

Review: The Fact of a Body is really two very distinct stories tied together by sexual abuse. The bulk of this book focuses on Rickey Langley, a convicted murderer whose crimes against children impelled Alexandria Marzano-Lesnevich to thoroughly investigate. Like many on death row, Ricky’s life had been difficult from his very conception. As Marzano-Lesnevich digs deeper, she sees a side of Ricky worthy of compassion, but still his crimes are horrific. Tried and convicted three times for the murder of a young boy, Ricky’s accounts of his crime were ever changing making the truth impossible to find. After the basics of Ricky’s life and crimes were presented once, I grew weary of the retellings and re-workings. For me, there were too many angles and too many opinions. I lost interest in Ricky, and by the end felt no compassion at all for him. I also had a hard time understanding Marzano-Lesnevich’s near obsession with his case.

The memoir portion of The Fact of a Body I found much more compelling. Alexandra and her sisters were abused by their grandfather as young girls. When discovered, his crimes were stopped, but never truly acknowledged. This left Alexandra haunted and hurt in fundamental ways. How could a family of lawyers ignore such a crime? Why was her grandfather not exiled from the family? As an adult, why does her sister disavow his abuse? These questions and their answers come into focus as the author is investigating Ricky and the life that led to his own abusive action.

“But how you tell the story has everything to do with how you judge. Begin Ricky’s story with the murder – and it means one thing. Begin it with the crash – and it means another. Begin with what my grandfather did to me and my sister. Or, begin when he was a boy, and someone did it to him.”

I’m not a reader of crime fiction, which may account for why I came to dislike all the investigating into Ricky’s crimes. It seemed to be too much attention given to a pedophile/murderer. For me, Alexandra’s memories of abuse and her journey toward healing were the real stars of The Fact of a Body. Grade: B-