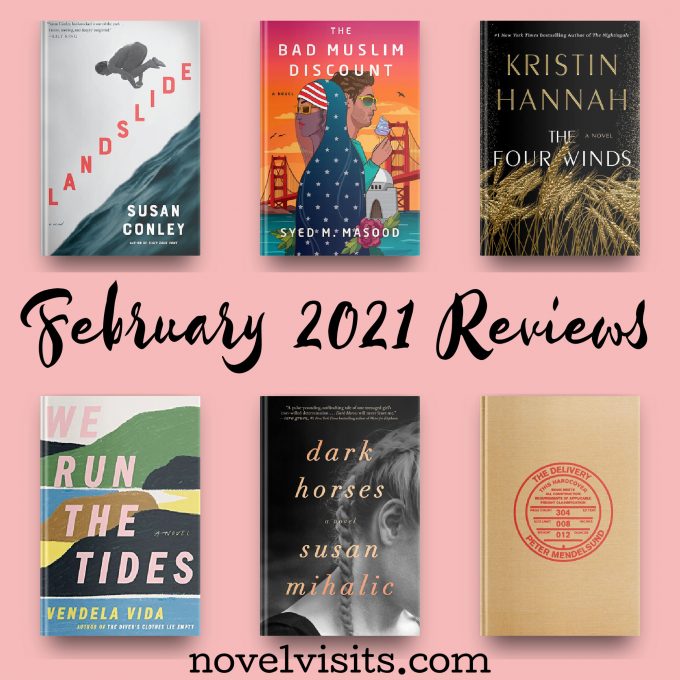 It’s been a bit since I’ve posted, and the change has been good for me. Today, I’m sharing six February releases, that I very much enjoyed. A couple releases that didn’t do much for me, I’m not bothering with. I’ve also been listening quite a bit and will be back next week with three great audiobooks from February, including one nonfiction (my first of 2021). How’s your reading been going?

The Best of the Month 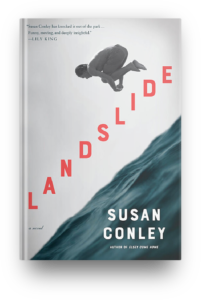 My Thoughts: I can already tell you that LANDSLIDE by Susan Conley will end up on my Best Books of 2021 list. Everything about her latest story resonated with me. I know nothing about living on an island, or what it’s like to be married to a fisherman in a small Maine village, but all that was window dressing on what it’s like to be the mother of teenage boys in a marriage facing strains. These things I know.

Jill’s husband had been hurt in a fishing accident far from home, and was recuperating in a Canadian hospital. The strains of being married to a man frequently absent were compounded by his accident and Jill’s eyes were opened to more than she wanted to see. This I know.

Jill affectionately thought of her sons as the “wolves,” a perfect metaphor for teenage boys. This I know. The relationship between Jill and her sons was where Landslide shone the brightest. It reminded me so much of my own mother-son relationships. Almost always one child seems more vulnerable or needs more from you than the other. For Jill it was her younger son. This I know. The constant worry, the guilt she felt, the sacrifices she made, the quandary that is teenage sons, this I know. Conely got it all exactly right.

“I’m so angry at Sam. So angry. Then my worry outweighs my anger. Then my love outweighs my worry. It goes in a circle like this. Anger. Love. Worry.” This I know. Grade: A 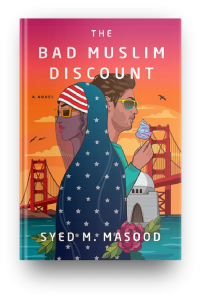 My Thoughts: Yes! Every good thing you’ve heard about THE BAD MUSLIM DISCOUNT by debut author Syed M. Masood IS true. So let’s break it down.

It’s a different take on the immigrant experience. True, this story features two very different Muslim families who immigrate to the U.S., one from Pakistan, the other from Iraq. The son of one, Anvar, and the daughter of another, Azza, are the cornerstones of Masood’s tale.

It’s full of irreverent humor. Yes, and in the best possible way. The author is indiscriminate in who and what he pokes fun at: Muslims, non-Muslims, stereotypes of both, politics, parenting, relationships. It was all fair game, but handled with a deft touch that never felt mean and often had me laughing out loud.

It’s a story of relationships. Above all else this is true. I loved the relationships in Anvar’s life. His connections to his grandmother and father were especially touching, and even his more tenuous relationships with his older brother and mother were full of heart. Azza’s relationships were not as simple, and as such gave real depth to the story.

Its writing is stellar. Without a doubt Masood’s brilliant storytelling made The Bad Muslim Discount one of my top books so far this year. Packed with humor, love, religion, family, and politics, in lesser hands this could have been too much, but Masood wove it all together brilliantly. I flew through the pages and was left wanting more. I’m left with only one question. When is his next book coming out? Grade: A

Note: I received a copy of this book from Doubleday in exchange for my honest thoughts.

Other Books I Recommend 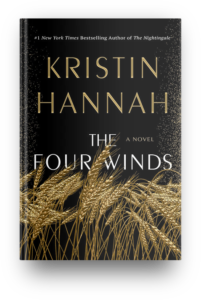 My Thoughts: Kristin Hannah has legions of fans and I count myself among them even though I’ve only read three of her books. The Nightingale was my first, and it’s still one of my most memorable reads ever. The Great Alone let me down a bit, and her new book, THE FOUR WINDS, falls squarely in the middle of the other two. I flew through the story of Elsa, a Texas woman beaten down by life. First by her own family who never quite understood her, then by a young husband who never quite loved her, then nature with the unrelenting Dust Bowl years, and finally by poverty in the Great Depression.

Through much of this Elsa acted in fear and insecurity (driving me a little nuts), but she had two children she needed to save, so Elsa fought her way to a different life. The relationship between Elsa and her daughter, Lareda, was where The Four Winds truly shone, making me enjoy the second half of the book much more than the first. As circumstances and Lareda pushed Elsa out of her shell, I liked her character so much more. I also found this book to be a wonderful history lesson in an era I don’t know as much about as I should. Though obviously very different, I saw many parallels between then and now: unprecedented times, huge populations of people falling into poverty, finding new ways to survive, and hanging on to the hope for change. Elsa lived all that. At its heart, The Four Winds was the story of a mother’s fight to protect and provide for her children and in that it was a great success. Grade: B+ 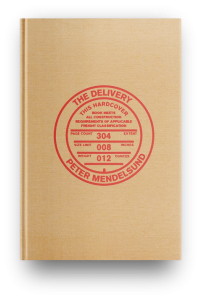 My Thoughts:  THE DELIVERY by Peter Mendelsund is a hard book to describe, but one that kept me quickly turning the pages, eager to know what was really happening. Yes, this is one of those books where you’re never completely sure what exactly is going on. Where the story takes place we’re never quite sure, but it feels like somewhere in U.S.. When it takes place seems to be in the present, or in the very near future. The “Delivery Boy,” around whom the story revolves, seems to be a refugee (in some sort of indentured role), working hard to earn five star ratings and big tips, hoping to find his way out of his status as a delivery boy. See? Lots of uncertainty.

For my tastes, being a little off balance as I read isn’t a bad thing. From start to finish, I continually found myself interested in this snapshot of a day in the life of the Delivery Boy. In the first half, Mendelsund’s story progressed in choppy, sometimes single sentence sections, that flowed together well. Though often left with more questions than answers, the Delivery Boy’s background slowly began to gain some focus. Then, the book began to veer into two parallel lines, that at first threw me and definitely slowed down the overall story.

Similar to Leave the World Behind, The Delivery will leave you with more questions than answers. I, for one, appreciate a story that leaves me wondering and filling in the holes with my own imagination. This is one of those books that stays with you, and one I’ll long remember. Grade: B

Note: I received a copy of this book from Farrar, Straus and Giroux in exchange for my honest thoughts. 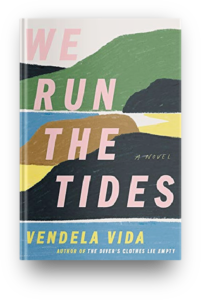 My Thoughts: For my tastes, WE RUN THE TIDES by Vendela Vida had a lot going for it before I even began reading. A coming-of-age story. ✔️ Set in San Francisco. ✔️
Takes place in the 80’s. ✔️ Friendships gone wrong. ✔️ Teenage angst. ✔️

Honestly, isn’t that enough? Close, but not quite. We Run the Tides also delivered an unusual story of friendship turned ugly. Parts were just as you might expect: girls’ loyalties shifting, a popular girl everyone wants to know, budding interest in boys. Then, it took a turn with lies that went too far and friends turned cruel, putting narrator Eulabee on the wrong side of popularity, as she held tight to her own truths. I wanted to wrap my arms around poor, earmest Eulabee, who struggled mightily with her shifting world. Though the story may have leaned a bit towards the hard to believe, I enjoyed every minute and especially loved the ending. Grade: B+

Note: I received a copy of this book from Ecco in exchange for my honest thoughts. 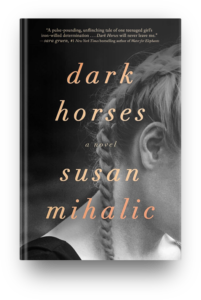 My Thoughts: DARK HORSES by debut author Susan Mihalic is a book that necessitates a lot of trigger warnings. In fact, the ARC came with a cover over the real cover, warning readers of the delicate nature of the story. I’d read up on the book, so already knew what to expect, but for those of you unfamiliar with the book, the story involves incest in truly the worst possible way. (This is made clear very early on, so I’m giving nothing away.)

Knowing that, Dark Horses is a story of a teenage girl, on the brink of qualifying for the U.S. dressage Olympic team. Her father/ coach, an Olympian himself, is every bit as driven as she is and her mother is largely absent. Though I found parts of this story very uncomfortable, I also understand that things like this do happen, and I  found much to like about Roan’s journey. I especially enjoyed learning about the sport of dressage and all that goes into it. (A horse made me cry!) I liked the relationships between Roan and several of the side characters and appreciated this as a much more intense coming-of-age story than you typically read. If I were to change one bit it would be the ending. I thought it was just a little too neat and tidy. I know exactly what I’d want to see differently, so message me if you’ve read this. Grade: B

Note: I received a copy of this book from Gallery/Scout in exchange for my honest thoughts. 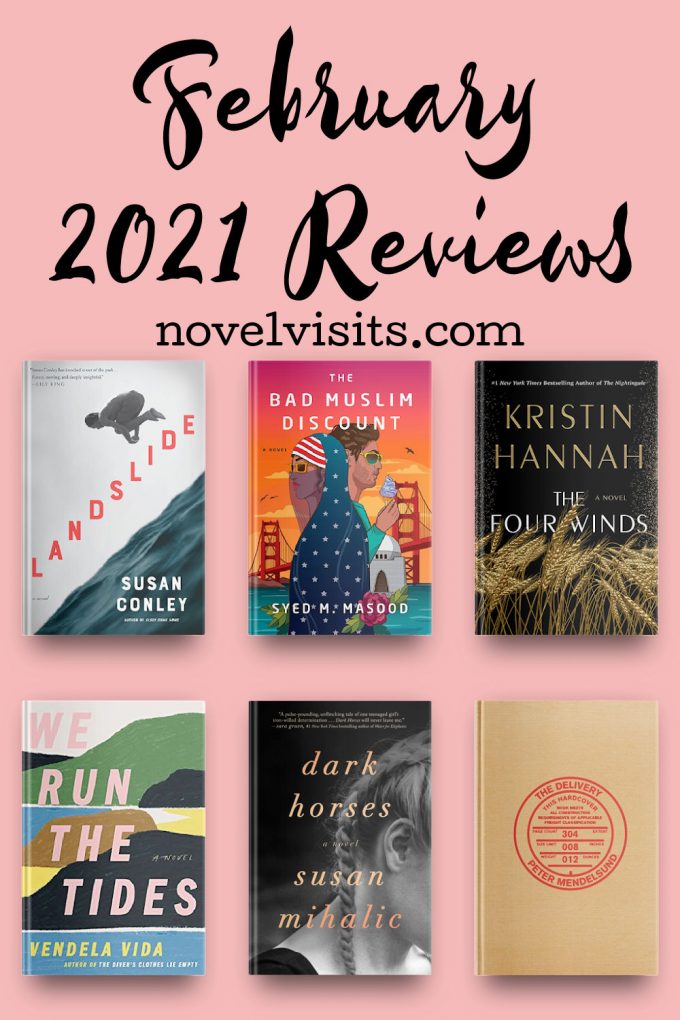