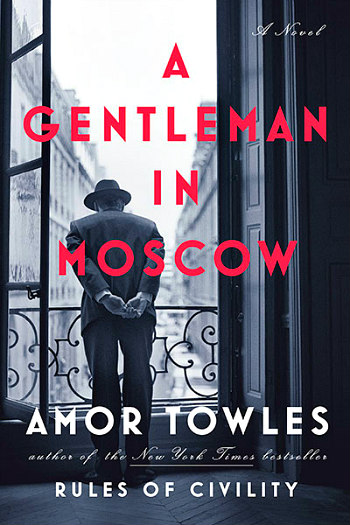 Single Sentence Summary: In June 1922 Count Alexander Rostov is sentenced to spend his life in Moscow’s Metropol hotel where he lives a relatively full life for more than 30 years.

Primary Characters: Alexander Rostov – this is the Count’s story. He grew up privileged in his grandmother’s rural home where he was educated not only in school, but in the role of a gentleman. Nina Kulikova – a 12-year old girl living in the Metropol with her father. She and the Count become great friends as she gives him an education about of life in the hotel. Sofia – Nina’s daughter.

Synopsis: As a young man Count Alexander Rostov published a poem that many believed to be a call to action after the failed revolt of 1905. Nine years later, in 1922, the Russian government feels the Count has “succumbed irrevocably to the corruptions of his class and now poses a threat to the very ideals he once espoused.” For this crime of class, Alexander Rostov is sentenced to life in the Metropol hotel where he had been living for the previous four years.

The Count is required to give up his large suite and most of his possessions, but he is a very adaptable man. He moves to two small attic rooms and truly makes the best of his new surroundings. At first, much of his hotel life is the same as always, barring the fact that he can’t go out the doors. A young girl, Nina, befriends the Count and shares with him many of the secrets she has learned about the Metropol with a passkey that she managed to become in possession of. The Count leads a full life within the confines of the Metropol. He has great friends among the staff, meets a charming actress whom he comes to love, makes the acquaintance of foreign journalists and diplomats staying at the hotel, and even comes to count a Russian diplomat among his friends.

Time marches on and eventually Nina moves out of the hotel, and the Count realizes he needs to find other ways to fill his days. Several years later, Nina reappears and brings with her a gift that will ultimately be the greatest gift of Count Rostov’s life. It is this gift that finally turns the Count’s eyes beyond his life sentence at the Metropol.

“Nina had not contented herself with the views from the upper decks. She had gone below. Behind. Around. About. In the time that Nina had been in the hotel, the walls had not grown inward, they had grown outward, expanding in scope and intricacy. In her first weeks, the building had grown to encompass the life of two city blocks. In her first months, it had grown to encompass half of Moscow. If she lived in the hotel long enough, it would encompass all of Russia.”

I loved the historical aspects of the Count’s story as it spanned Russia from just after WWI, through WWII, and into the Cold War era. From the Bolsheviks to communism under Stalin. It’s a history I don’t know enough about, and enjoyed seeing through the Count’s eyes.

I finished this book ten days ago and have been mulling over why it is that the story didn’t awe me as it did so many others. I can only surmise that it’s because of my own American sensibilities. I was at times frustrated with the Count for being so accepting of his life sentence confined to a hotel. I admired how wonderfully he made the best of the situation he was placed in and that he always stayed true to the gentleman he was raised to be, but for over thirty years? Most of the book it didn’t seem like he was even being watched, though there was certainly the threat of death if he were to leave. I wanted him to just sneak out and take a walk, or plan an escape. He had money to buy help. I felt he was a little too complacent with the lot he was dealt in life, and I think that comes from my own background growing up in a country where we demand individual freedoms.  So, while I enjoyed Count Rostov’s story and learned a lot about the leisure class in Russia, A Gentleman in Moscow was not my favorite Amor Towles novel. Grade: B