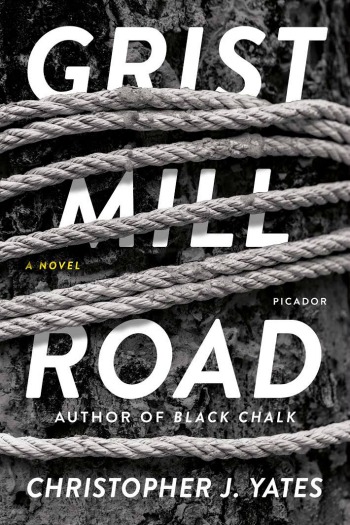 Twenty-six years after a brutal crime, the victim, the witness, and the perpetrator find their lives still tightly connected.

“…among the craggy rock cliffs and glacial ponds of timeworn mountains, three friends―Patrick, Matthew, and Hannah―are bound together by a terrible and seemingly senseless crime. Twenty-six years later, in New York City, living lives their younger selves never could have predicted, the three meet again―with even more devastating results.”

A Harrowing Crime – Grist Mill Road begins with a bang, literally. In the first few pages, 12-year old Patrick (Patch) watches as his best friend Matthew fires 49 BB’s into Hannah, helplessly tied to a tree. This scene is so graphically written that your only response will be horror. Christopher J. Yates knows how to grab your attention!

Vivid Storytelling – Grist Mill Road starts out being narrated by Patch as he tells the events of that brutal August day back in 1982.

“And yet I watched.

What does it mean to watch? When a crime takes place in front of you, what is watching? Is it a failure to act or simply keeping your eyes open?

The past is alternated with the characters’ lives 26 years later where Patch and Hannah are somehow married. Patch’s self-deprecating narration really works and is a pleasure to read. The same is true of Hannah, who begins adding to their story in the second part of the book. Her style is a little tongue-in-cheek, even a bit flippant. She keeps the story lively.

A Different Sort of Mystery – There is no mystery surrounding the crime in this story. Instead, the mystery forms around what happened after and more importantly what will happen next. That, coupled with getting the whole story from multiple sources, caused confusion, in a good way. With each page, the need to know grew.

Matthew – I had issues with almost everything about Matthew’s part of the story:

I know I wasn’t meant to like Matthew, so maybe this was what Yates wanted. Perhaps Matthew is actually part of what worked for me?

Slow Middle and an Odd End – I felt like Grist Mill Road really stalled a bit in the middle, losing steam from the first half. This was roughly the point in which all three began narrating. The very end, I just have to ask, “Why?” I have no idea what I was meant to take away from the book’s last scene.

I’m a huge fan of Christopher J. Yates’s debut, Black Chalk, so was eager to read his sophomore effort. With all second novels, I’ve come to fear the “sophomore slump,” but I would not put Grist Mill Road in that category. For me it didn’t quite deliver the raw, breathless impact of Black Chalk, but none-the-less I was always engaged and eager to get back to reading. I’ll definitely be at the front of the line for all future books written by Yates. Grade: B