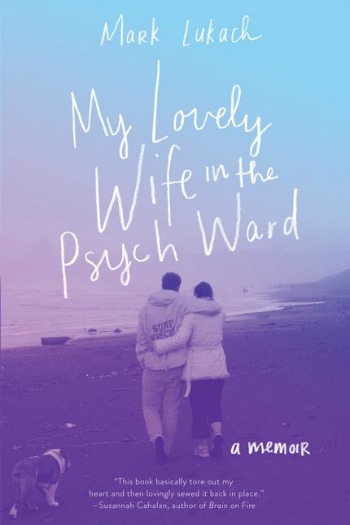 When Mark Lukach’s wife had her first psychotic break they were totally unprepared for it, and with the next, they were even less prepared.

“Mark and Giulia’s life together began as a storybook romance. They fell in love at 18, married at 24, and were living their dream life in San Francisco. When Giulia was 27, she suffered a terrifying and unexpected psychotic break that landed her in the psych ward for nearly a month. One day she was vibrant and well adjusted; the next she was delusional and suicidal, convinced that her loved ones were not safe.”

Honesty – I think honesty is what truly made My Lovely Wife in the Psych Ward shine. Lukach didn’t seem to be hiding or sugarcoating anything. He was blunt in his descriptions of his wife’s psychotic behaviors, his own fears, the medical community, tensions around help offered by friends and family, and most of all concerns for his son’s well being. It couldn’t have been easy to lay bare so many people he loved and he never gave himself a pass either. Lukach’s honesty compelled me to keep reading.

Realities of Mental Healthcare in America – Make no mistake about it, Mark Lukach comes across as grateful for much of the care his wife has received, but frustrations also abound. Nothing is black and white about mental healthcare, from practitioners, to facilities, to therapies, to drugs. Like most of us, Lukach had no idea how to navigate the mental healthcare system, but he learned and as I listened, so did I. It’s a very scary reality.

“The nurse gently patted my hand and then went back to work. I sagged into the already sagging chairs completely overwhelmed by the layers of emotions that buried me into my seat: grief, fear, rage, more grief. In the perverse dystopia of the psych ward this was progress.”

A Father’s Love – After a period of wellness, Mark and his wife had a son, but psychosis was not behind them. Mark’s role took a drastic change as the father of a child with a mentally ill mother. His evolution became a delicate balancing act as Mark strove to do the “best” for everyone, but most of all for his son.

Narration – Josh Bloomberg did an amazing job narrating My Lovely Wife. He really brought Mark and Giulia’s story to life, making me feel like Mark was talking directly to me.

Giulia’s Perspctive – This is Mark’s memoir, but I’d have liked to know a little more about what was happening to Giulia from her perspective. Mark shared his perceptions of what Giulia was thinking and feeling, but a chapter or two written from her end would have been very illuminating. I’d have also liked to know if there was any history of mental illness in Giulia’s family.

I had few expectations going into My Lovely Wife in the Psych Ward, so was pleasantly surprised with how good it was. My heart broke for Mark, Giulia and Jonas, but I was left thankful that they’d chosen to share such a personal story. I suspect the Lukach’s journey may help many others. Grade: A-