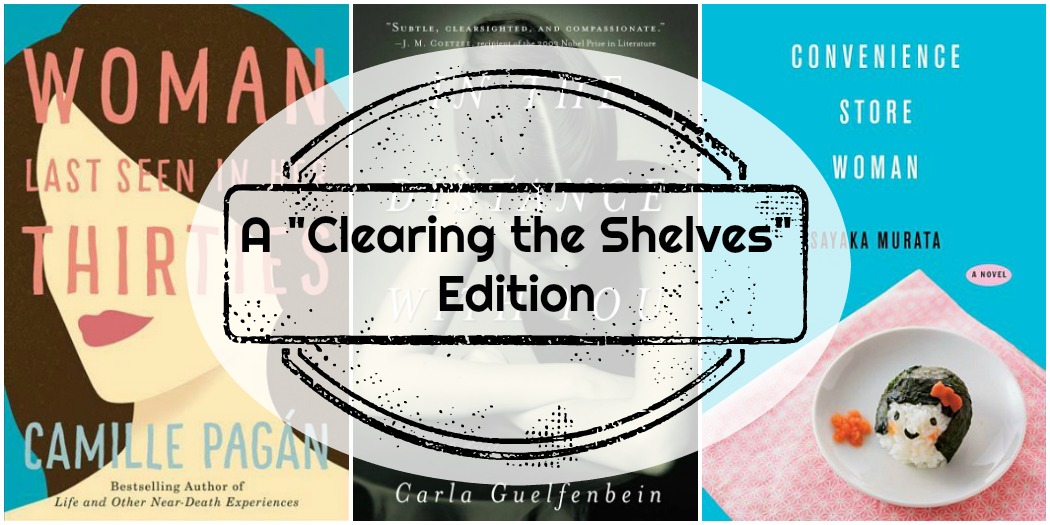 Once again I have amassed three seemingly unrelated books in need of review. One takes place in the U.S., one in Chile, and the third in Japan. Two are contemporary, while one has historical elements to it. Two have female protagonists, with the third having more than one woman at the heart of its story. One is a debut, two are books in translation, and one I listened to on audio. With so little in common, nothing else would do but to “Clear the Shelves” with some mini-reviews!

Linking up with Modern Mrs. Darcy. 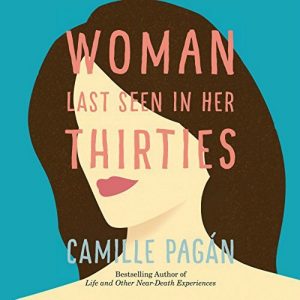 From the Publisher: “At fifty-three, Maggie Harris has a good marriage and two mostly happy children. Perpetually anxious, she’s also accumulated a list of semi-reasonable fears: falling air conditioners, the IRS, identity theft, skydiving, and airbag recalls. But never once did Maggie worry that her husband of nearly thirty years would leave her.
On the day Adam walks out the door, everything that makes Maggie secure goes with him. Only then does she realize that while she’s been busy caring for everyone else, she’s become invisible to the world—and to herself.”

My Thoughts: Woman Last Seen in Her Thirties is the story of a 50-something woman trying to rebuild her life after her husband suddenly tells her there’s someone else. While that in itself is awful, scary, devastating, it’s sadly not unusual. Many of us, including myself, have been through similar experiences and I suspect readers’ reactions to Woman Last Seen in her Thirties will vary widely based on their own experiences.

I found myself both sympathetic to Maggie and incredibly frustrated by her. Pagán captured the trauma of a long marriage ending suddenly in a very real way. Maggie was stunned, numbed. She walked around in a fog having no idea where her life would go. That felt real. Even her obsessive desire to figure out what went wrong and who the “other woman” was seemed real, but her longing to get her husband back under any circumstances initially turned my sympathies away from Maggie. It was hard for me not to watch Maggie through the lens of my own experiences. We had so much in common. Like her I took a solo trip to Italy shortly after my divorce and had great adventures there on my own. When Maggie acted differently then I would have, it was easy for me to grow frustrated with her, until finally I stopped judging her and recognized that everyone’s experiences are their own.

In the end, I liked Woman Last Seen in Her Thirties quite a lot. I do think that Pagán overplayed a few of her story’s elements and gave Maggie a fairly lucky (i.e. unlikely) set of breaks, but overall this was a sweet story of a woman learning to take back her own power and isn’t that what we want for all women? Grade: B

Narration: I thought the audiobook edition of Woman Last Seen in Her Thirties was fine. I wouldn’t rave about Amy McFadden’s narration, but there was nothing awful about it either. Some of the dialogue felt a little off, especially when voicing the male characters. Maggie’s adult son always sounded like a stoned surfer dude to me! 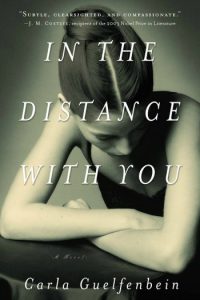 In the Distance With You by Carla Guelfenbein
Publisher: Other Press
Release Date: June 5, 2018
Length: 416 pages
Amazon

From the Publisher: “Vera Sigall, now eighty years old, has lived a mysterious, ascetic life far from the limelight of literary circles. This powerful character has a profound effect on those around her—Daniel, an architect and her neighbor and friend, unhappy in his marriage and career; Emilia, a Franco-Chilean student who travels to Santiago to write a thesis on the elusive Vera; and Horacio, an acclaimed poet with whom Vera had a tumultuous, passionate affair in her youth.”

My Thoughts: I’m going to be honest, in the Distance With You is a book i almost quit on. More than once. But, every time I put it down, I found myself drawn back to this book. It’s a story that’s slow to build, so you have to be patient with it. At first, there didn’t seem to be much to hold my interest, but slowly more and more questions arose until I reached the point where I had to know the answers.

The central character to In the Distance With You is Vera Sigall, an 80-year old Chilean writer found at the bottom of the stairs by her neighbor and friend, Daniel. Vera has lived an interesting, rich life including scandals and affairs. As she lays in a hospital bed, the readers are treated to the details of Vera’s life through the lenses of Daniel, Horatio, Vera’s onetime lover, and Emilia, a grad student in Santiago to do research on Vera for her thesis. As might be expected, these three narrators also have connections, and as Vera’s life comes into focus, so too do theirs.

I found Carla Guelfenbein’s writing to be lovely. She had some really stunning phrasing, beautiful descriptions, and great insight. Translator John Cullen clearly did a wonderful job.

“In any case, I’d already learned that in their zeal for generalities, history books, like museums, swallow up the particularities of the men and woman who inform them, exalting the identities of only a few. Or – to put it more succinctly – if I want to understand, I always turn to novels and poetry.”

At times there was a bit of an otherworldly quality to In the Distance With You, a trait that doesn’t always work for me, but did here. I thoroughly enjoyed Daniel and Emilia’s parts, but Horatio’s sometimes dragged a bit. I also think the story had some unexplained inconsistencies. I’m not sure if they were an issue with the translation or were there to begin with. Still, those were easy to overlook as I got deeper and deeper into Vera’s story and hungered to know how the different storylines would finally be resolved. Grade: B

Note: I received a copy of this book from Other Press (via Edelweiss) in exchange for my honest thoughts. 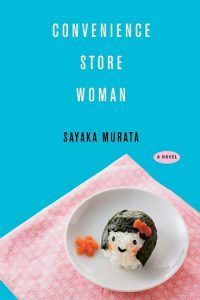 From the Publisher: “Keiko Furukura had always been considered a strange child, and her parents always worried how she would get on in the real world, so when she takes on a job in a convenience store while at university, they are delighted for her. For her part, in the convenience store she finds a predictable world mandated by the store manual, which dictates how the workers should act and what they should say, and she copies her coworkers’ style of dress and speech patterns so that she can play the part of a normal person. However, eighteen years later, at age 36, she is still in the same job, has never had a boyfriend, and has only few friends.”

My Thoughts: The convenience store woman in this book by the same title is Keiko, a 36-year old who has worked in the same convenience store since she was 18. Debut author Sayaka Murata still works part time in a convenience store, so clearly has the gravitas for putting together her first novel. Convenience Store Woman is all Keiko’s story and Keiko is one very, very odd woman. Even as a child Keiko had been a little strange. Her family worried about her, she had no real friends, and Keiko didn’t really know how to act around other children. As she grew older, Keiko learned to mimic the actions of others, eventually going so far as to mimic their speech patterns and copy how other women dressed and carried themselves.

In these ways Keiko got by for a long, long time. She was content with her neatly ordered life. But, by her mid-thirties people were questioning Keiko. Why was she still working in a convenience store? Why wasn’t she married? Had she ever even had a boyfriend? Once again, Keiko felt the need to adapt to fit the expectations of other, but with limited social skills she had few options. Keiko’s solution was almost as odd as Keiko herself, and it was here that Convenience Store Woman went completely off the rails for me.

I’m hesitant to go to a place with a story that the author never did, but throughout this book I kept thinking that surely Keiko must be on the high-functioning end of the Autism spectrum. Her inappropriate responses to others, her mimicking, her compulsively ordered life, and her lack of social skills all pointed in that direction. Had this been played up more, the book would have been a lot more interesting to me. As it was, Convenience Store Woman was a strange little book about a really odd woman with a sad little life. It proved to be just too weird for me! Grade: D

Note: I received a copy of this book from Grove Press (via NetGalley) in exchange for my honest thoughts.