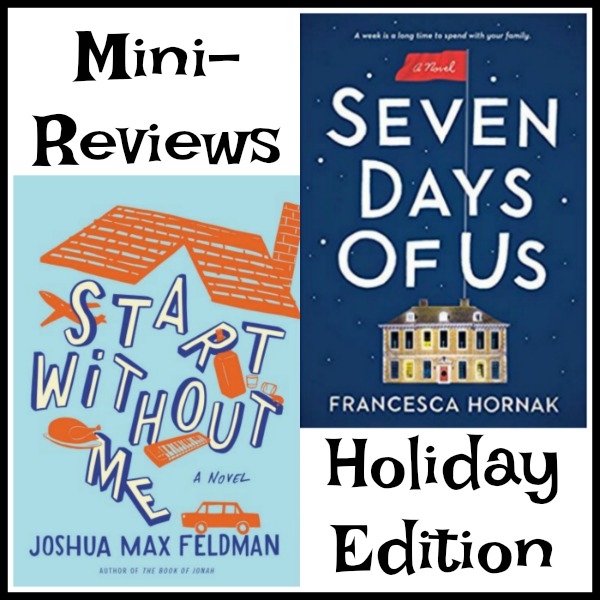 Halloween is only two short weeks away and then the quick slide into the holidays will begin. Before we know it baking will commence, decorations will abound, shopping will overwhelm us, and families will gather. Some of us love getting together with our entire families, but others dread it because let’s face it, family drama just happens sometimes! Both Start Without Me and Seven Days of Us delve into that fertile landscape of holiday family drama. 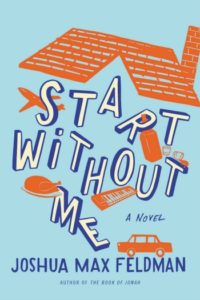 From the Publisher: “In an airport restaurant on Thanksgiving morning, Adam and Marissa meet. Over the course of this day fraught with emotion and expectation, these two strangers will form an unlikely bond as they reckon with their family ties, their pasts, and the choices that will determine their way forward.”

My Thoughts: Start Without Me opens with 35-year old Adam waking up in his childhood bed, staring down a nephew he barely knows, and feeling very out of place in his parents’ home. Adam has been a semi-successful musician most of his life, but he’s also been an alcoholic much of that time. He knows he’s caused his family a lot of pain and facing their judgement is really more than he can bear and quickly he flees. Marissa, 31 and a flight attendant on a short layover, is facing the prospect of a day with her in-laws who have never quite accepted her, and her husband who she’s been keeping secrets from. These two strangers meet in a hotel coffee shop, and manage to wind up in the same car, traveling to face the day with their respective families.

While the premise of Start Without Me may sound light, it’s actually quite a serious book fraught with shame and abuse, secrets and lies, love, and of course, drama. The first half of the book did have a lighter feeling to it, with certain parts almost having a bit of a “slapstick” quality to them. That was enough to keep me invested until the book really took off in the second half. Only then did I really get to know Adam and Marissa the lives that brought them to this Thanksgiving Day. Adam’s journey as a musician was everything you might expect, until it suddenly wasn’t. In Adam, I found a very flawed character who I couldn’t help rooting for. Marissa, a child of poverty and an alcoholic mother, had picked herself up and made a better life, but that wasn’t all roses. Feldman used the unlikely, short-term friendship of Adam and Marissa to show them both at their best and their worst.

“She could hear the breath coming in and out of her nose, like she’d transformed into a snorting bull; the fearful way he leaned back made her aware of her hands, balled in fists at her sides. A cascade of foul-mouthed loathing, encompassing every one of this fuckups and outrages over the entire day, was right on the tip of her tongue – and she wanted as badly to let it loose as she’d previously wanted to go to sleep.”

For me Feldman’s writing was the star of Start Without Me. Alternately emotional and snarky, his writing kept me going through the slower first half. I don’t think this will be the book for everyone, but I do think those willing to give Start Without Me a little time will thoroughly enjoy the ups and downs of this early holiday story. Grade: B – 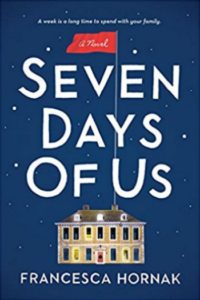 From the Publisher: “…Olivia, a doctor, is only coming home because she has to. Having just returned from treating an epidemic abroad, she’s been told she must stay in quarantine for a week…and so too should her family. For the next seven days, the Birches are locked down, cut off from the rest of humanity—and even decent Wi-Fi—and forced into each other’s orbits. Younger, unabashedly frivolous daughter Phoebe is fixated on her upcoming wedding, while Olivia deals with the culture shock of being immersed in first-world problems.”

My Thoughts: I want to start out by apologizing to the writer and the publisher of Seven Days of Us, because I didn’t like anything about this book and I feel terrible about it. Obviously, I should have stopped reading early on, but it was sort of like a natural disaster – horribly fascinating. The premise of a British family being locked together for seven days over Christmas sounded intriguing, and with another family that might have been true, but not with this one.

I don’t even know how to review this one! Here’s a list of what didn’t work for me, and there WILL be spoilers.

Note: I received copies of these books from the publishers (via Edelweiss for Start Without Me) in exchange for my honest thoughts.