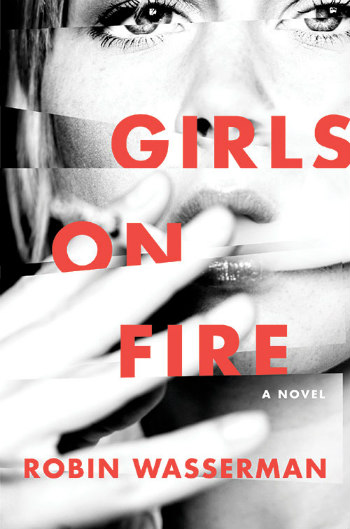 Single Sentence Summary: With a backdrop of 1990’s Nirvana, two outcast teenage girls explore the darker parts of life and find that some of the “popular” kids have already been there.

Primary Characters: Hannah/Dex – 16-year old small town girl, not very popular, no real friends. Lacey – new to town Grunge girl who loves Kurt Cobain, her mom and stepdad don’t much want her around. Nicky – THE popular girl in town, her boyfriend was found dead in the woods three days after Halloween.

Review/Synopsis: I really liked Girls on Fire; a sometimes-shocking coming-of-age story that kept me guessing throughout and took some very dark twists. Robin Wasserman has written young adult novels, and this, her first foray into adult fiction, is outstanding. The story opens in 1991 where three days after Halloween, a popular teenage boy is found alone in the woods with a “self-inflicted” gunshot wound in his head. From there the story moves to two girls, Hannah (renamed Dex), a quiet lonely girl, and Lacey, a Kurt Cobain loving rebel in Doc Martens. The two quickly become “Us” with Lacey exerting a lot of influence over Dex. Dex admires Lacey and changes to be more like her, but there is much more darkness to Lacey’s past than Dex realizes. Also prominent in the story is Nicky, who Dex has known forever, but has never been important enough to be included in her popular crowd. Nicky was the girlfriend of the dead boy and plays a role in Lacey’s past. When Lacey is sent away for a time Nicky begins to manipulate Dex’s life with shocking consequences. As Halloween 1992 approaches the three girls are on a collision course that will change their lives forever. Girls on Fire is a gritty page-turner of teenage obsessions and devastating friendships filled with unexpected twists and turns. You’ll be thinking about it long after you’ve read the last page! Grade: B+