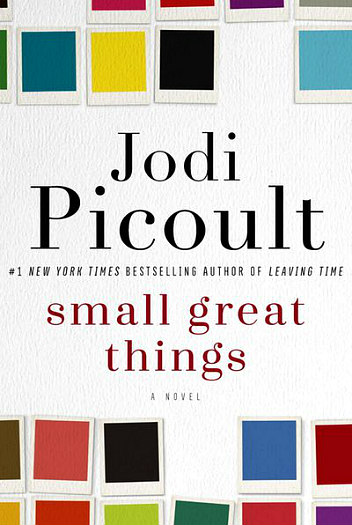 Single Sentence Summary: An African-American nurse is charged with murder after hesitating to preform CPR on the newborn son of white supremacists.

Primary Characters: Ruth Jefferson – the African-American labor and delivery nurse at the center of this story. Turk Bauer – white supremacist father of the child who dies as the story begins. Kennedy McQuarrie – the public defender that takes on Ruth’s defense.

Synopsis: Ruth Jefferson, widow and mother of a teenage son, is a labor and delivery nurse with over twenty years experience. She’s seen her share of strange parents over the years, but none like Turk and Brittany Bauer. This couple, leaders in the white supremacist community, ban Ruth from having any contact with their child. Ruth’s supervisor honors their request, and though Ruth is hurt and angry, her job is more important than the indignity. Days later, Ruth notices the baby turning blue and hesitates to take action. When the full medical team is unable to resuscitate the Bauer’s baby, Ruth alone is charged with murder.

Following Ruth’s arrest, a white public defender, Kennedy McQuarrie, is assigned her case. Kennedy likes Ruth and wants to help, but also sees this high profile case as a stepping-stone in her career path. In a case with racism at its heart, Kennedy’s best advice to Ruth is that they don’t even touch on racism in their defense strategy. The courts don’t like it. Ruth is shocked and conflicted, but her need to stay out of jail for her son overshadows everything else. In the months that follow, the two women form a cautious relationship as they try to build a defense. That relationship comes under fire when the realities of the trial begin.

Review: This is a hard book to review in today’s climate. I had planned to read Small Great Things in early November, but after the election and all the bitterness surrounding it, I just wasn’t prepared to read a book on such a sensitive topic. Racism IS the story in Small Great Things. Jodi Picoult did a wonderful job using the lens of her book to examine racism in America from many different angles. Many times, she brought to light racism where most of us would not see it.

For years I’ve worked in a multi-racial school and feel strongly that, though I can’t help but see color, it is never a motivating factor in how I relate to anyone. But, there were times in this book where I was struck by new elements of racism Picoult spotlighted. Things white people would most often not consider racism. Like not acknowledging the advantages that come with just being born white. Or, how the fears black parents have for their children are very different from those of white parents. Ruth and Kennedy had many conversations about race that forced me to consider racism in a new light.

“You say you don’t see color…but that’s all you see. You’re so hyperaware of it, and of trying to look like you aren’t prejudice, you can’t even understand that when you say race doesn’t matter all I hear is you dismissing what I’ve felt, what I’ve lived, what it’s like to be put down because of the color of my skin.”

Jodi Picoult used the alternating voices of Ruth, Turk and Kennedy to tell this story. That element was important because it kept the book from being too heavy-handed. I especially liked how she handled Turk. He was a most unsympathetic character, but Picoult still gave him glimmers of humanity. Each of her three storytellers was multi-dimensional, though some of the other characters were less so.

I enjoyed Small Great Things for the first 90% of the book, but the last 10% I was disappointed in. Without giving too much away, I’ll just say that the ending was too neat and tidy for me. I hadn’t read Jodi Picoult in many years, and I think this sort of ending may be why. Still, there is so much to learn and reflect on about racism in this book, and for that reason alone I think it is well worth reading. Grade: B