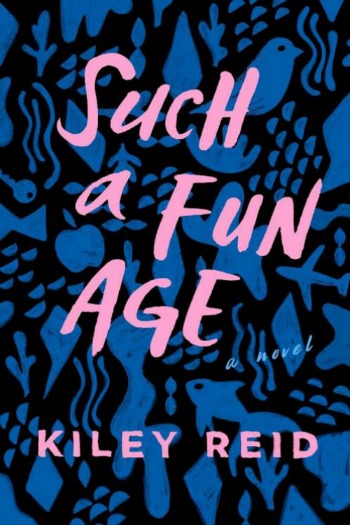 It seems everyone around Emira Tucker wants to stake a claim on her, but Emira herself has no idea what she wants.

“Alix Chamberlain is a woman who gets what she wants and has made a living, with her confidence-driven brand, showing other women how to do the same. So she is shocked when her babysitter, Emira Tucker, is confronted while watching the Chamberlains’ toddler one night, walking the aisles of their local high-end supermarket…But Emira herself is aimless, broke, and wary of Alix’s desire to help. At twenty-five, she is about to lose her health insurance and has no idea what to do with her life…”

Such a Fun Age is a tough book to review. I both liked it and was disturbed by it. Overall, it left me with a lot to think about even weeks after finishing, so that definitely tips it over to the pro side for what I’m considering my first book of 2020.

This is the story of Emira, a 25-year old woman of color working as a nanny for a very entitled white woman, Alix. Early in the story Emira is confronted late at night in a grocery store with suspicions about why she has a toddler, clearly not her own at such a late hour. This encounter is video taped by another shopper, Kelley, a thirty something white man. From there what unfolds is a story of a girl lost. She nannies for Alix while trying to figure out what her next move should be. She has a circle of friends who all want the best for her, but see her uncertainty and don’t really know how to help. And then there’s Kelley, who entered her life that horrible night and quickly evolved into Emira’s boyfriend.

That’s the set up, but the real story is about racism in its most subtle forms. Alix longs to be “friends” with Emira, but why? She becomes obsessed with Emira, whom she paid no attention at all to prior to that fateful night. Kelley treats Emira well and makes her feel more grown up, but he has a history that calls into question his own motives. Through it all, I found myself attached to none of the characters, and actively disliked more than one, but the story itself compelled me to keep going.

“Alix watched Kelley take this in. She was furious, but she couldn’t stop focusing on how attractive his face was when he was confused. How could she hate someone so much and also want him to think she was sexy?”

Many times I was struck by the writing of this debut author: deeply meaningful, yet also young, adding an almost sarcastic touch to the title. The book started out slowly, only taking off in the second half. What I liked best about Such a Fun Age was that it quietly explored the more pervasive, subtle forms of racism, which many people would never even think about. Yes, it is an issue book, but one that doesn’t hit you over the head with its message. Well worth reading. Grade: B

Note: I received a copy of this book from G.P. Putnam’s Sons (via NetGalley) in exchange for my honest review.