As the summer begins to wind down, I find myself with a few books that I’ve yet to review. Though very different, these three books have in common that they feature in one way or another a young woman at a crossroads in her life. Today I take a look at those three women and their stories with three mini-reviews. 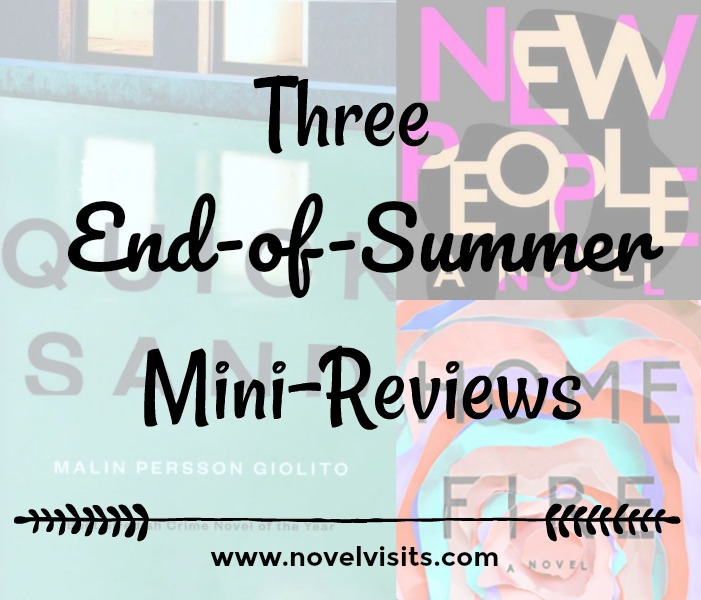 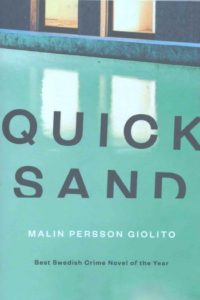 Publisher’s Final Sentence – Quicksand is an incisive courtroom thriller and a drama that raises questions about the nature of love, the disastrous side effects of guilt, and the function of justice.

My Thoughts – I’m not normally a reader of courtroom dramas, but was immediately drawn into the story of Maja Norberg, an 18-year old on trial for killing 2 classmates as part of a larger school shooting. There is no doubt that Maja shot both her boyfriend and her best friend.

“She was dead, wasn’t she? I had heard her die, I had heard everyone die, every one of them, they were all dead, weren’t they? I saw them die. Everyone but me was dead, and just a few moments ago we were alive.”

She admits it; she feels remorse; she wants to be punished for her crime. This makes Maja a very sympathetic character despite the horrible thing she’s done. Malin Perrson Giolito smartly moves Maja’s story between the days in court, the months she’s spent in jail, and those leading up to the shooting. All, moving toward a clearer picture of how a girl with so many advantages could end up at school with a rifle in her hands. Maja didn’t realize she was at a crossroads until it was too late. The question for her remains, “Is there a life to be had after murder?” Giolito’s handling of touchy material was well thought out, only occasionally veering into over-philosophizing. Quicksand is a novel I thoroughly enjoyed and recommend to anyone who likes coming-of-age, courtroom, or crime novels. Grade: A- 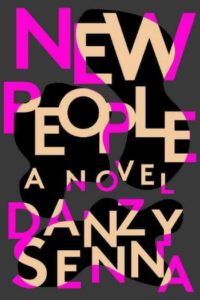 Publisher’s Final Sentence – Heartbreaking and darkly comic, New People is a bold and unfettered page-turner that challenges our every assumption about how we define one another, and ourselves.

My Thoughts – I don’t typically need to like a character in order to like her story, but in New People 27-year old Maria became an exception that. Rarely have I had such a strong negative reaction to a character. I thought Maria was a woman who had a lot going for her. She was a Stanford grad in her 6th year of a Phd. program at Columbia. She had an extremely supportive fiancé with whom she was selected to be part of a documentary on “new people,” those blurring the racial lines. But Maria wasn’t really satisfied with her life. At times she felt like perhaps she and Khalil weren’t quite black enough, their sex life wasn’t all it could be, her dissertation seemed to be stalled, and she found herself lusting after an attractive young poet, who happened to be a much darker skinned man than Khalil. None of that made me dislike Maria, but the way she handled herself did. To me Maria showed a pattern of believing that her feelings and opinions were all that mattered, often manifesting themselves in ways that were just plain mean-spirited or weird. I like snark, but Maria took it too far.

“Maria smirks at the poet, wondering if he too can see how forced it all is – this group and the pantomime of their newly discovered blackness. It’s catching. The craze. We once were lost, but now we’re black. It’s so old-school it’s new-school. They have taken on their duties as Negros with aplomb, she’s gotta give them that.”

Maria faced many crossroads in New People, and for most I had a hard time understanding the choices she made. It wasn’t until the very end of her story that I began to feel enough sympathy to like her just a little. Grade: C+

Note: I received a copy of this book from the publisher via Edelweiss in exchange for my honest review. 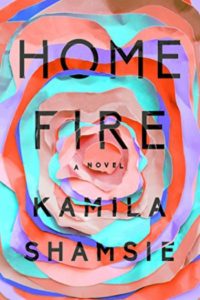 Publisher’s Final Sentence – Suddenly, two families’ fates are inextricably, devastatingly entwined, in this searing novel that asks: What sacrifices will we make in the name of love?

My Thoughts – Kamila Shamsie’s beautifully written Home Fire is many things. It’s a story of three English born Pakistani siblings living in London and the shadow cast on them by their father, an extremist fighter who died on his way to Guantanamo. The veil of suspicion remains ever present in their lives. It’s the story of a man (also Pakistani) forced to choose between his Muslim heritage and his political ambitions. More than anything, Home Fire is a story of a sister’s single-minded devotion to her twin brother. When 19-year old Parvaiz finds himself in a situation he desperately wants to be free of, his twin, Aneeka, will do anything to rescue him. Aneeka never truly faces a crossroads because there is never any questions as to where her loyalties lie. I felt sorry for this girl who was blind to the other people in her life, and even more, I felt sorry for them. Aneeka’s love for her brother was in itself a form of radicalization, seeing no room for anything or anyone else. No one mattered as much as Parvaiz. Grade: B-

Narration: Home Fire’s audio version was narrated by Tania Rodrigues. I found her to be very easy to listen to, with both her pace and inflections making the story easy to follow. This was no small feat considering the story was told from five different perspectives!