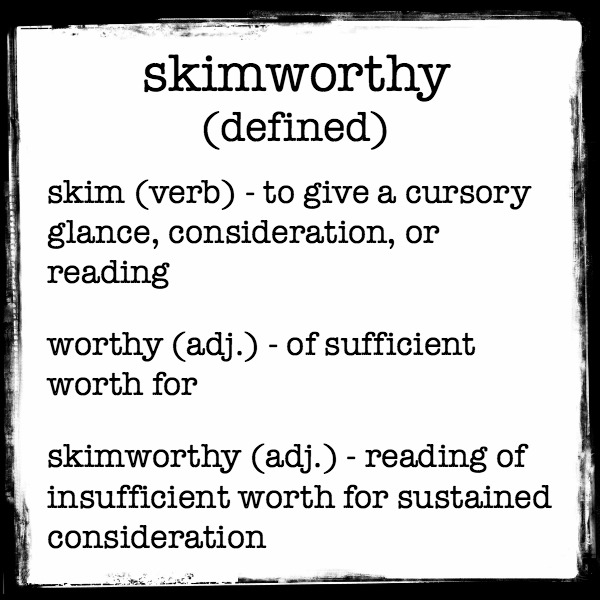 Unfortunately, skimming is more or less a book’s kiss of death for me. It’s what puts a book in no man’s land. A skimworthy book falls in that bleak, gray area between ones I simply can’t finish and those I’m fully invested in. A skimworthy book has parts that are intriguing, but not enough to keep me reading every word, and so the skimming begins. Today, I’m sharing my two most recent skimworthy reads. 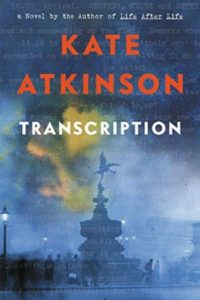 From the Publisher: “In 1940, eighteen-year old Juliet Armstrong is reluctantly recruited into the world of espionage. Sent to an obscure department of MI5 tasked with monitoring the comings and goings of British Fascist sympathizers, she discovers the work to be by turns both tedious and terrifying. But after the war has ended, she presumes the events of those years have been relegated to the past forever”

My Thoughts: I very much liked the premise of Transcription, but for me the story had trouble getting off the ground. It’s told in alternating timelines, ten years apart. In 1940, Juliet Armstrong is 17, recently lost her mother and is recruited to work for MI5, first as a transcriptionist, but later doing some light spying. Interesting, but not very exciting. In 1950, Juliet is seemingly working in broadcasting at the BBC, but still appears to have her finger in some mild espionage with MI5. Hints from both timelines kept me going, but never truly grabbed me which is why I fell into skimming during the second half of Transcription. Along the way I found parts that really worked, like a little rhyming thing Juliet did as well as some terrifically funny scenes, but overall the book just didn’t come together for me. Grade: C

Note: I received a copy of this book from the publisher, Little, Brown & Co., in exchange for my honest review. Thank you! 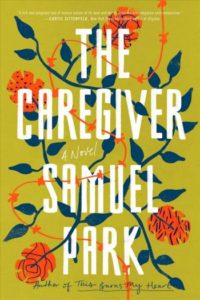 From the Publisher: “Mara Alencar’s mother Ana is her moon, her sun, her stars. Ana, a struggling voice-over actress, is an admirably brave and recklessly impulsive woman who does everything in her power to care for her little girl……Ana makes decisions that indelibly change their shared life. When Mara is forced to escape, she emigrates to California as an undocumented immigrant and finds employment as a caregiver to a young woman dying of stomach cancer.

My Thoughts: In The Caregiver we meet Mara at three critical points in her life. At 8 she’s living under the spell of her impetuous mother as they try to survive the violence and corruption that marked Brazil in the late 1970’s. At 16, Mara tries to both protect and care for her mother who suffers from heart disease and a past that haunts her. When the reader first meets Mara, she’s 26, living in Los Angeles, and caregiver to a woman dying of stomach cancer. As Mara cares for this woman her thoughts are drawn to Brazil, the life she led with her mother, and most of all the heartbreak that brought Mara to the United States. I found each part of Mara’s story mildly interesting, but not compelling. I appreciated learning more about life in Brazil in the 70’s and 80’s, and enjoyed Mara’s beliefs in the goodness of Americans, but even skimming I was able to predict where most of this story was going. Grade: C

Note: I received a copy of this book from the publisher, Simon & Schuster, in exchange for my honest review. Thank you!

Have you read any SKIMWORTHY books recently?