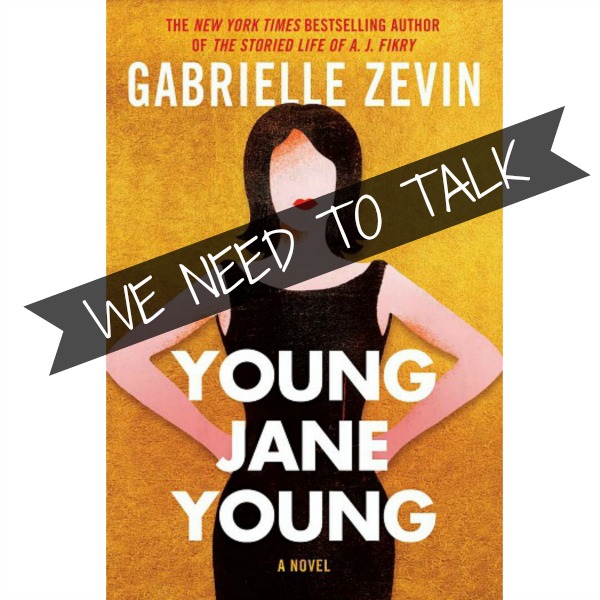 Sometimes a book just screams to be discussed and Gabrielle Zevin’s new novel, Young Jane Young, is one such book. The much loved author of The Storied Life of A.J. Fikry has people buzzing about some of the very different turns used in her latest book. Readers who had looked at the book’s description on Goodreads might have been better prepared for the oddities of this book, but those of us who perused Amazon or Algonquin Books got a close, but slightly less forthcoming description.

Aviva Grossman, an ambitious congressional intern in Florida, makes the mistake of having an affair with her boss —and blogging about it. When the affair comes to light, the beloved congressman doesn’t take the fall. But Aviva does, and her life is over before it hardly begins: slut-shamed, she becomes a late-night talk show punch line, anathema to politics.

She sees no way out but to change her name and move to a remote town in Maine. This time, she tries to be smarter about her life and strives to raise her daughter, Ruby, to be strong and confident. But when, at the urging of others, Aviva decides to run for public office herself, that long-ago mistake trails her via the Internet and catches up—an inescapable scarlet A. In the digital age, the past is never, ever, truly past. And it’s only a matter of time until Ruby finds out who her mother was and is forced to reconcile that person with the one she knows.

Young Jane Young is a smart, funny, and moving novel about what it means to be a woman of any age, and captures not just the mood of our recent highly charged political season, but also the double standards alive and well in every aspect of life for women.

Young Jane Young was told from the perspective of five different women, each adding to the story of Jane and the choices she made. For our purposes today, let’s talk about what worked, what didn’t, and what other questions arose in this book. I’ll briefly include my thoughts, but please jump in with yours and add questions that I’ve missed. For those of you who haven’t yet read Young Jane Young, I’m sorry, but THERE WILL BE SPOILERS from here on out!

Parts That Didn’t Quite Work

What did you think of Young Jane Young?