Some people enjoy seeing a movie they love again and again, or are fine with watching reruns of a favorite show. Others can revisit a book that resonated with them multiple times. I’m not one of those people! No matter what the format, I rarely have any desire to return to a story where I already know the outcome. Last fall, I made an exception and reread The Secret History by Donna Tartt and to my great relief, I enjoyed it almost as much as the first time around. So, for today’s Top Ten Tuesday (hosted by That Artsy Reader Girl) I’m highlighting other books I’d really like to read a second time. 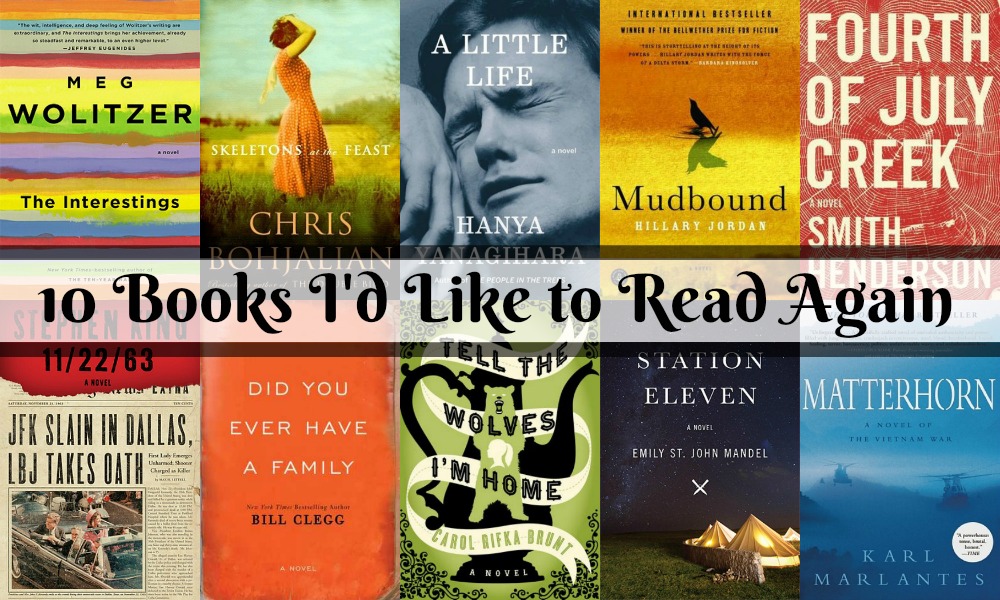 When considering book, I only looked at ones published in the last ten years, and I excluded any that I’d read in the last couple years. Still, narrowing my choices down to ten proved to be much harder than I’d expected!

11/22/63 by Stephen King – 11/22/63 is Stephen King at his best. As I read this book I was constantly in awe of his creativity and storytelling ability. At nearly 850 pages, it’s crazy long, yet the story flew by. I’d like to see if the King magic would hold up for a second time around.

Fourth of July Creek by Smith Henderson – I may be wrong, but I have a sense that this is one of those books not a lot of people have read. I loved Henderson’s complex story of a down-and-out Montana social worker trying to help the nearly feral son of a paranoid survivalist. His book was rich in layers of complexity, making it worthy of a reread.

The Interestings by Meg Wolitzer – Books with a big cast of characters are ones I really go for. Then you set one in NYC and I’m devoted. I think I remember The Interestings so well, but I’m sure if I read it again I’d find that I’d forgotten much about the lives of six friends who first meet as teens at a summer camp for the arts. I want to be part of their lives again!

A Little Life by Hanya Yanagihara – People have wildly varying opinions of A Little Life, and I’m firmly on the side of loving it. In fact, this may be my all time favorite book. It gutted me. I’ve never cried as much with another book, nor mourned as deeply. Those feelings are still so strong when I think of A Little Life that I know I’ll read it again someday.

Matterhorn by Karl Marlantes – No one was more surprised than me when I became immersed in this book about a company of soldiers during the Vietnam War. I don’t like war stories, but Marlantes, a Vietnam vet who took nearly 30 years to craft this story, focused on on the men as much as the war. He took you there with them and I’d like to go back.

Mudbound by Hillary Jordan – I found myself shocked, awed, and devastated after reading Mudbound. So why would I want to go back? Set in 1940’s Mississippi, Jordan’s book about two families, one white, one black, was so well crafted that despite knowing the outcome, I’d appreciate picking up on all the details again.

Skeletons at the Feast by Chris Bohjalian – This is easily my favorite Bohjalian book. I like well crafted World War II stories and his is among the best. What drew me to Skeletons and has me wanting to go back is that it’s told from the point of view of a family from Prussia fleeing to the west as the war is ending. The horrors they see are both eye-opening and devastating.

Station Eleven by Emily St. John Mandel – Many dystopian books can be just too much for me, but not Station Eleven. St. John Mandel plopped her characters into a world devastated after a virus wiped out much of the population. Following this band of people as they fought to survive their new reality and each other was a pleasure worth savoring again.

What books are on the top of your list to read again?