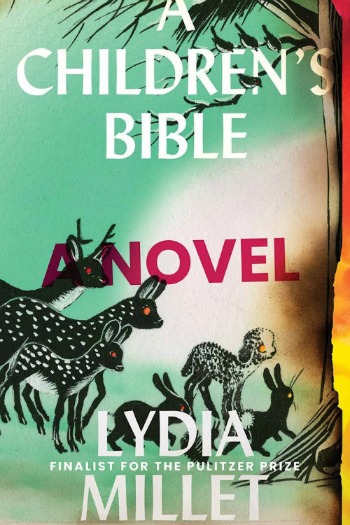 Twelve children flee their hedonistic parents after an apocalyptic storm devastates the mansion they’re all living in for the summer.

“Contemptuous of their parents, who pass their days in a stupor of liquor, drugs, and sex, the children feel neglected and suffocated at the same time. When a destructive storm descends on the summer estate, the group’s ringleaders―including Eve, who narrates the story―decide to run away, leading the younger ones on a dangerous foray into the apocalyptic chaos outside…”

A Children’s Bible might best be described as an odd little book, but don’t let that put you off. It’s one of my favorite books this year. What makes it odd? Well, to begin with the genre is hard to nail down. It’s a bit dystopian, a bit fantasy, a bit political. But, what stands out the most is that Lydia Millet ingeniously wove her story around events in the Bible, not in any sort of traditional religious way, but as plot points to move her own very clever story.

A Children’s Bible tells the story of twelve children on a summer-long vacation with their parents. They’re all staying at a huge home somewhere near the sea. The kids are mostly teenagers, but a few are younger. Similarly to Kevin Wilsons’s Nothing to See Here, the parents are worthless. They’re Philistines, willing to let their teens supervise the younger children doing as they please, just as long as their own days and nights of partying go on uninterrupted. The children, united in disgust by their parents’ hedonistic ways, revel in their own summer fun.

“They liked to drink: it was their hobby, or – said one of us – maybe a form of worship.”

“Had they had goals once? A simple sense of self-respect? They shamed us. They were a cautionary tale.”

All seems fine until a huge hurricane comes out of nowhere bringing with it flooding rains that the children survive in a series of treehouses, one called “The Ark.” From there the story truly takes off. The children realize the disaster has only made their parents more worthless, and the home they were staying in unsafe for many reasons. They decided to flee in search of safety. As you read their unlikely story, biblical analogies pop up over and over. I thought that might be off-putting, but it in no way was. The voice of the narrator, Eve, is so strong that she makes even the most  outrageous turn seem plausible.

The more I read, the more I loved this book. Yes, you have to just roll with parts of the story, but that’s also what makes it so great. Kudos to Millet for braving to write such an original tale. Her clever working of Bible stories into a modern-day imagining of an apocalypse wowed me. At a slim 224 pages, A Children’s Bible is one of those books you’ll be able to read in just a day or two, and if you’re like me, you’ll be sad to have finished so quickly. A month after finishing, I’m still thinking about this one! Grade: A

Note: I received a copy of this book from W.W. Norton Company in exchange for my honest review.