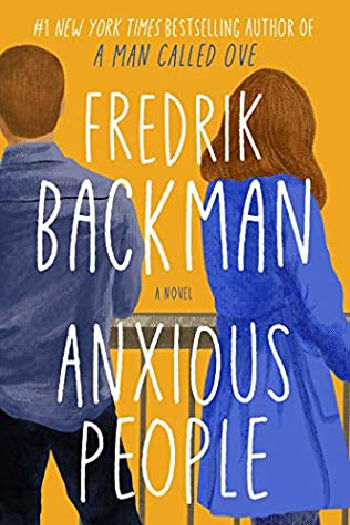 A botched bank robbery leads to an inadvertent hostage taking with unconcerned “victims, ” and a whole lot of confusion.

“Looking at real estate isn’t usually a life-or-death situation, but an apartment open house becomes just that when a failed bank robber bursts in and takes a group of strangers hostage. The captives include a recently retired couple who relentlessly hunt down fixer-uppers to avoid the painful truth that they can’t fix their own marriage. There’s a wealthy bank director who has been too busy to care about anyone else and a young couple who are about to have their first child but can’t seem to agree on anything, from where they want to live to how they met in the first place. Add to the mix an eighty-seven-year-old woman who has lived long enough not to be afraid of someone waving a gun in her face, a flustered but still-ready-to-make-a-deal real estate agent, and a mystery man who has locked himself in the apartment’s only bathroom, and you’ve got the worst group of hostages in the world.”

You’d be hard pressed to find someone looking forward to reading Anxious People more than me. I’ve had a copy for a really long time, but kept forcing myself to wait. So, in the end, was the wait worth it? Well, yes and no.

I’ll always be a fan of the way Fredrik Backman dives into the life of his characters and sets them up in unexpected ways. His originality in doing so ranges from the quirky in A Man Called Ove, to the serious in Beartown and Us Against You, to the slightly annoying in Anxious People. Yes, I said slightly annoying because more than I’d like, I found these characters to be just that.

This is the story of a bank robbery that morphs into an unplanned hostage situation. It’s the story of the small town cops trying to figure out what happened to said robber, and all the “victims” who seem to be hiding something. It played a bit like a sort of “Who’s on First” comedy.

A man dressed in a rabbit costume emerged. Well, if we’re being completely truthful, not a complete costume. It was really just a rabbit’s head, because apart from that the man was wearing nothing but underpants and socks.”

But, this story was also infused with the more serious and those were the parts I tended to enjoy more. At other times I grew weary of the many shifts and misconceptions, but in the end I appreciated how the entire story came together. Additionally, I applaud Backman on his creativity and originality, once again. He’ll always be an auto-buy author for me! Grade: B

Note: I received a copy of this book from Atria Books in exchange for my honest review.