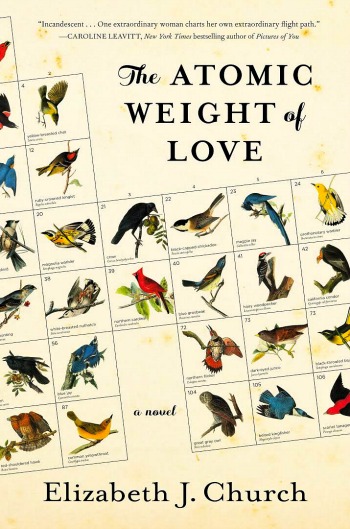 Single Sentence Summary: The remarkable life story of a brilliant woman who falls victim to the expectations of the times she lives in, while still searching for her role in the world as it changes.

Primary Characters: Meridian Wallace – a woman of science from the time she was a child. Meridian is both ahead of her time and trapped inside of it. Alden Whetstone – the very accomplished physics professor that Meridian marries. He is 20 years older than she is. Clay – a much younger man and a Vietnam veteran who Meridian meets in her forties.

Synopsis: Growing up in a small Pennsylvania town, Meridian Wallace was ten when she was given her first book about birds. At eleven it was Darwin’s Origin of the Species. She was a woman who reveled in science, and especially ornithology. At 17, in 1941, Meridian set off for the University of Chicago where she was a gifted student, always challenging herself to learn more. While there she met and fell in love with her physics professor, Alden Whetstone. His mind never failed to draw Meridian in.

When the call of WWII and developing the nuclear bomb drew Alden to Los Alamos, he and Meridian quickly married. She temporarily gave up her plans for a graduate degree in ornithology to follow Alden to Los Alamos. One year became two, and two became three, until Meridian realized the dreams of her own advanced degree had ceded to Alden’s greater calling. Through the years Meridian kept up her “science” by researching crows. She met people who influenced her life and understood the doubts she had about compromising her dreams to Alden’s. One of those people was Clay, a Vietnam veteran, who opened up Meridian to many new possibilities. Throughout the 60’s, 70’s and beyond, Meridian was challenged to change with the world or be left behind.

Review: I really loved this debut novel by Elizabeth Church. It was a little slow in the first few chapters, but then it took off and soared! The whole time I was reading The Atomic Weight of Love, I was thinking of my own mother and my grandmother. Meridian would fall roughly between their ages, and so much of what she experienced, the women in my family must also have experienced. Today, a woman as brilliant as Meridian would go off and get as much education as possible. She’d be out in the world using all she had learned to discover new things, write books, educate others.

In the 40’s and 50’s, it was the expectation that a woman would follow her husband and his career path even if it meant giving up her own. Most of the women at Los Alamos had abandoned careers and dreams for their husbands’ “greater” contributions. When talking with a friend about the “assumed compliance” of the wives living in Los Alamos Meridian comments,

“What I mean is that the entire culture assumed, right along with our husbands. It was understood. And while they might well respect us, sometimes even be a tad less intelligent than us, by marrying them we tacitly agreed to a contract in which we would sublimate. They did not have to subjugate – we did that for them.”

Meridian struggled with her lost career her entire life, but for most of it she couldn’t see her way clear to do things any differently. Like my grandmother, and to a lesser extent my mother, Meridian’s destiny was rooted in her husband’s choices.

I loved the changes in Meridian as she began to evolve with changing times. Clay, a much younger man, challenged Meridian to put herself first and look at what she wanted and needed most in her life. Church did a brilliant job of developing the female characters in The Atomic Weight of Love, even the lesser ones. You knew them well and understood the choices they made and the demands the times placed on each. The men seemed a little bit one-dimensional, but it was really Meridian’s story so that can be forgiven.

The author titled every chapter after a species of bird, telling what that species is called as a group and relating a small detail about each species. I grew to look forward to that little tidbit at the start of each chapter. Well done! Grade: A