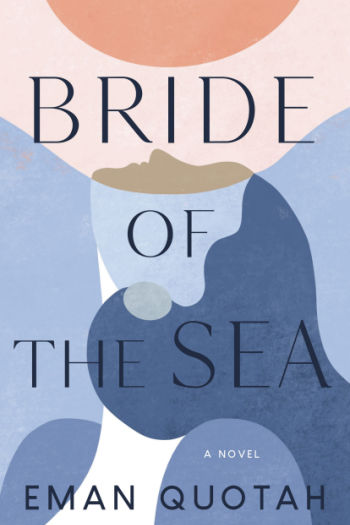 “During a snowy Cleveland February, newlywed university students Muneer and Saeedah are expecting their first child, and he is harboring a secret: the word divorce is whispering in his ear. Soon, their marriage will end, and Muneer will return to Saudi Arabia, while Saeedah remains in Cleveland with their daughter, Hanadi. Consumed by a growing fear of losing her daughter, Saeedah disappears with the little girl, leaving Muneer to desperately search for his daughter for years. The repercussions of the abduction ripple outward, not only changing the lives of Hanadi and her parents, but also their interwoven family and friends―those who must choose sides and hide their own deeply guarded secrets…”

Bride of the Sea by Eman Quotah, is the story of a mismatched Saudi couple, Muneer and Saeedah,  and their young daughter, Hanadi, all living in Ohio.

“He was that kind of child, one who stopped himself from doing things, who would rather observe. She was the kind of girl who scrambled up and didn’t think twice. No risk seemed to scare her; nothing changed her mind.”

Eventually, vast differences topple their marriage, but the question of who Hanadi will live with looms. In Saudi culture after age 7 it is customary for a child to live with his or her father. Saeedah cannot accept this. Instead, she vanishes with Hanadi. Despite detectives, money, and frequent trips between his home in Jidda and the U.S. Muneer can’t locate his daughter.

“Muneer slams his fist into a cushion. How does a father lose his daughter as though she were a pair of socks under a bed, a toothbrush left behind in a hotel? No one asks the question out loud but Muneer knows they think it, too.”

Halfway through, Bride of the Sea shifts from Muneer and Saeedah, to Hanadi, a young woman with a past she needs to reframe and a family she wants to know. Torn between the world she grew up in and the one she missed out on, Hanadi travels to Saudi Arabia on the cusp of the Iraq War. The cultural dichotomies Hanadi faces make this a truly unique and touching coming-of-age story.

“When the maître d’ speaks to her in Arabic, she feels herself blushing. Not knowing the language that is her birthright is a special kind of stupidity.”

At times, the story moved a little slowly for my taste, but throughout I appreciated the compassion debut author Eman Quotah showed all her characters. With tender prose, she deftly examined what being taken did to not only the life of Hanadi, but those of Muneer and Saeedah, too. Grade: B

Note: I received a copy of this book from the Tin House Books (in print and via NetGalley) in exchange for my honest review.