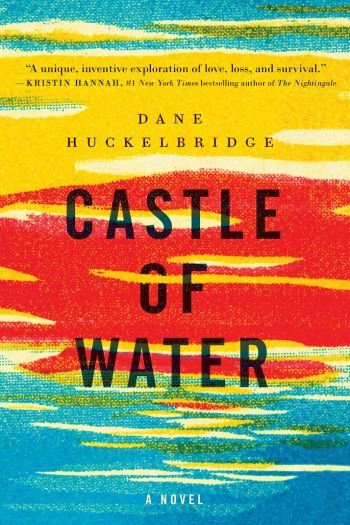 After a terrible plane crash, a man and a woman find themselves alone on a remote Polynesian atoll with no choice but to forge some sort of life there.

“Two very different people, one very small island…But when their small plane is downed in the middle of the South Pacific, the sole survivors of the wreck are left with one common goal: to survive. Stranded hundreds of miles from civilization, on an island the size of a large city block, the two castaways must reconcile their differences and learn to draw on one another’s strengths if they are to have any hope of making it home.”

Begins at the Ending – I always like a story that starts with the end as Castle of Water did. In the very first chapter we see a man going to a grave and leaving a bunch of bananas there. It doesn’t take long to realize who that man was, but the question of what he’s doing, and why, lingers throughout the story. As a reader, you know this is where you’ll end up and in this story that worked especially well.

Easy to Like Characters – I don’t need to like characters in order to love a book, but it’s always a nice addition when I do. Both Barry and Sophie, our stranded couple, were easy to like. Sophie had a biting quality to her in the beginning, as one would expect after the shock of a plane crash, losing a husband while on her honeymoon, and coming to realize they were truly alone.

“Right then and there, the trapdoor on both their lives clicked and fell out from under them. A brief, sinking sensation, and then the cold thump of reality. No one was looking for them. Not one boat, not one soul.”

Barry was a little inept and nerdy. Both grew as individuals and a team as day, after day, after year on the island progressed.

Side Stories That Work – Oftentimes side stories can drag the main storyline down, but in Castle of Water Huckelbridge’s only added to his overall plot. I especially loved a running storyline that had Barry and Sophie alternately telling the other a fictional account of what their life might be like off the island. It highlighted the people they had grown into being.

Great Narration – I loved the voice of the narrator in this book. There was just something so mater-of-fact about the way the story was told. I loved that element!

A Lot of Unlikely Coincidences – The book did require you to do a little suspending of disbelief. Barry and Sophie benefitted from some unlikely coincidences, like the fact that centuries ago, Polynesians had used their atoll as a stopping place on long journeys. Those Polynesians had conveniently planted coconut and banana trees on the island and had seeded the nearby lagoon with clams. Sophie had had survival training at the feet of her grandfather, and Barry operated a shortwave radio as a child. And the biggest one of all? The one little Bic lighter, after three years it was still working!

It was easy to breeze past the minor flaws that made island life possible for Barry and Sophie and to instead focus on the people they were and the relationship they developed. Yes, the book was a little on the sappy side, but you know what? There’s room in the world for a sappy love story every now and again. Castle of Water was a really lovely, easy, fast read. We all need that sometimes! Grade: A-