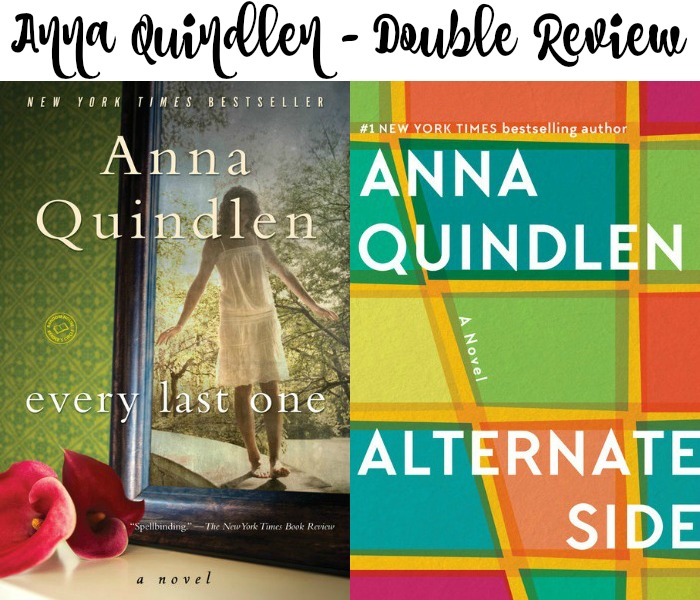 Up until just a few weeks ago, I’d never read anything by Anna Quindlen, but had been told by many that I was missing out. So when I secured an early copy of Alternate Side I was delighted, only to soon hear rumors that it may not be Quindlen at her best. Sarah from Sarah’s Bookshelves convinced me that I really needed to start with Every Last One and I decided to take her advice. I chose to listen to that one and wanting to be perfectly fair to Alternate Side, I also listened to it. What follows is my attempt to look at the many good aspects both books shared, as well as a few final thoughts on each.

Quindlen, A Writer of Women – In both Every Last One and Alternate Side I was struck by just how well Anna Quindlen developed her female leads. Both were women so real I felt like I easily knew them. Mary Beth Latham might be one of my own friends or neighbors, and under slightly different circumstances I might say the same of Nora Nolan. Quindlen thoroughly fleshes out her protagonists and makes an entire story in which every step they take, every decision they make resonates with authenticity.

Family Relationships – It’s clear to me that Anna Quindlen likes to write about what she seems to know best, families. In Every Last One her primary focus was on Mary Beth Latham’s relationships with her three teenage children. As with all teens they could be fun, difficult, and emotional and Mary Beth worried about each for different reasons. Her relationship to her husband was just as real, but took a bit of a backseat in this story, whereas in Alternate Side the relationship between Nora Nolan and her husband was at the heart of its story. Nora’s children were just slightly older and on the brink of being independent. In both books the family relationships rang completely true.

A Community, For Better or Worse – In Every Last One Quindlen built a network of friends (both close and not so close), relatives, employees, other parents, and friends of children to create a real sense of community: wonderful, but sometimes cloying. In Alternate Side, the bigger community was the city of New York in its totality, but within that was the tiny dead-end street where much of the drama of Nora’s life occurred.

Best Friends – I loved that in both books the women whom the stories were about had a best friend in the most fundamental sense. Alice and Jennie, each close friends since college, were unconditionally present for Mary Beth and Nora when needed. That unwavering loyalty is everything that a best friend should be and these two shone.

A Pivotal Event – The fact that both books had a moment that changed the trajectory of the entire story is no huge surprise. Most stories have such a moment, but I was startled by both in Quindlen’s books. The events forever changed the course of her heroines’ lives, admittedly more so for Mary Beth than for Nora. For both women, I appreciated the metamorphosis Quindlen delivered as they came to terms with a new reality.

{Final Thoughts on Each} 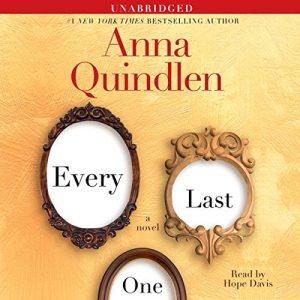 Everyone was right, I should have tried Anna Quindlen a long time ago. I thought Every Last One was amazing. Before I had any idea where the book was going, I was enthralled by the normalcy of the Latham family. They could have been my family, or my neighbors. I liked them. I worried for them because I knew tragedy in some form had to await. What actually happened I never saw coming. I was stunned and also a little awed that Quindlen could so successfully go there. Her resolution of this story felt exactly right to me, perfectly real and that’s why I so loved Every Last One. Grade: A

Narration: Hope Davis did a good job narrating, though occasionally I got a little lost on who was speaking. There were many female characters in Every Last One, which also included a lot of dialogue and that was just a bit of a challenge. 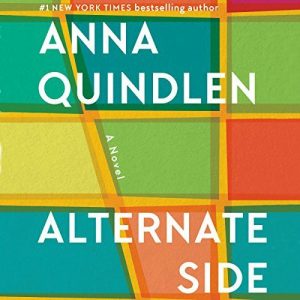 I liked the story of Nora Nolan at a critical time in her life. Her children were out of the house, her husband was restless and their dreams were no longer the same. I also really appreciated the secondary star of this book, the city of New York itself: the lives it contains, the people at odds, the way the city is ever-changing, always moving forward and never looking back. Nora was the embodiment of NYC and that was fantastic! If I only focused on these part of Alternate Side, it was wonderful, but there were a lot of other parts. The entire parking theme that ran through the rest of this story got old. I know parking is a HUGE issue if you live in New York, but honestly, it’s boring to the rest of us. Similarly, the walking of dogs and the rats, I could have also done without. I understand that these conflicts helped to move Nora through her story; I’d have just enjoyed it more had Quindlen found a different way. Still, I liked much more than I didn’t about Alternate Side, so please don’t be scared away by my (or others’) review. Try Alternate Side and decided for yourself, especially if you’re an Anna Quindlen fan as I now am! Grade: B

Narration: I though Ellen Archer did a terrific job narrating Alternate Side. Her pace was fast and I really like that. At no time did my mind wander, because Archer managed to keep me with her at all times, fully bringing Nora Nolan to life.

Note: I received a copy of this book from the Random House (via NetGalley) in exchange for my honest thoughts.