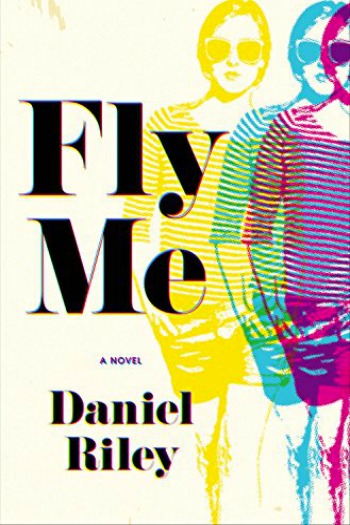 Single Sentence Summary: 1972 Vassar grad, Suzy Whitman, reluctantly signs on as a stewardess, and quickly finds the job has some hidden benefits.

Primary Characters: Suzy Whitman – Suzy has always been a high achiever, expecting a lot of herself. Following in her older sister’s footsteps was not in her plans. Grace – Suzy’s older, more free-spirited sister. Grace loves flying and living in Southern California. Mike – Grace’s “secret” husband, since stewardesses had to be single.

Publisher’s Best: In Sela del Mar, California-a hedonistic beach town in the shadow of LAX-Suzy skateboards, suntans, and flies daily and nightly across the country. Motivated by a temporary escape from her past and a new taste for danger and belonging, Suzy falls into a drug-trafficking scheme that clashes perilously with the skyjacking epidemic of the day.

Review: Fly Me by Daniel Riley gets its title from the 1971 ad campaign run by National Airlines in which a gorgeous young stewardess looked in the camera saying, “I’m Cheryl. Fly me.” In Riley’s debut, our heroine, Suzy, turns down an opportunity to star in a similar campaign. Fly Me is more than a book about a pair of sisters flying in the early 70’s, the heyday of aviation. It’s also a book about the quintessential (but fictional) California beach town of Sela del Mar. I grew up in the Bay Area and spent my college years in Southern California, in an era not all that distant from the 70’s, so the setting of Fly Me was a big draw. In a good way, Riley squeezed every possible Southern California/1970’s cliché into his story: skateboarding, surfing, slathering on baby oil, sex, coke, rock & roll, Jim Jones, airline hijackings, drug-running and more. Being from California I loved and appreciated Suzy’s observations about the citizens of Sela del Mar.

The story itself started out a little slow. Riley worked to build a viable background for why Suzy found herself in Sela del Mar working for an airline. She was a very smart girl, one year too young to have been admitted to Yale. Suzy did get to do a semester there as part of an exchange with Vassar, but seemed to have a lot of anger about her missed opportunity. While that might have been interesting in another story, I’m not sure it was important to this one.

Fly Me was at its best in the middle of the book. It “took off” when Suzy started smuggling drugs for the local supplier. What at first was a one-time thing rapidly bloomed into more when Suzy came to need cash, and quickly! As one might expect in a book filled with clichés, getting out of the drug business was not going to be an easy task. I found everything in the middle of the book to be fun, compelling, and at times even heartwarming.

For me, the big problem with Fly Me came in the end. The resolution of Riley’s story was so unlikely, so unreasonable, so (dare I say) ridiculous that it left me disappointed. I acknowledge that Riley may have been going for some humor with a sort of tongue-in-cheek nod to yet another cliché, but if so, it didn’t work for me. Instead it felt like the author had backed himself into a corner and couldn’t find a way out. Still, I liked more about the book than I didn’t and think it will make a perfect beach read this summer! Grade: B-