Last fall I began to notice a lot of buzz around Claire Fuller’s upcoming book, Swimming Lessons. So many had loved her debut novel, Our Endless Numbered Days, and they were eager to read her second. I’d somehow missed Fuller’s debut, so decided to squeeze it in last month. Within just a couple of weeks I read both of Fuller’s novels and am reviewing them together today. 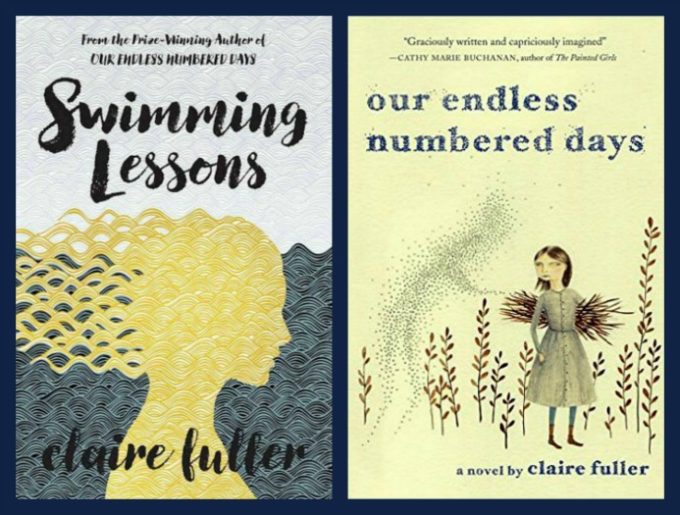 Swimming Lessons is the story of a mother who vanished many years ago and the daughter longing to know why. Flora has returned to her childhood home to help care for her dying father who believes he has seen his missing wife, Ingrid. Swimming Lessons, unfolds on two planes: the present with Flora and her father, and the past where Ingrid writes letters to Gil grieving a marriage that was in trouble from the start. Flora adores her father, but cannot let go of the hope that Ingrid, who left her at 9, might reappear in her life. (Tin House Books, 356 pages, 2/7/17)

Our Endless Numbered Days is Peggy’s story. At 8-years old, Peggy and her survivalist father set out on what is supposed to be a summer vacation. They hike deep, deep in the woods to a dilapidated cabin. Peggy doesn’t come out of those woods for 9 years. At eight, Peggy believes whatever James tells her: her mother is dead, the rest of the world has simply fallen away, they are the last two people on Earth. She is devoted to James. He is literally her entire world. As Peggy grows older, fighting for survival winter after winter, she’s forced to see her father through a new lens. (Tin House Books, 382 pages, 3/17/15)

Review: Though the premises of Fuller’s two novels could not have been more different, their basic structures were strikingly similar. Let’s look at some of those similarities and where it was done better.

In Our Endless Numbered Days, Fuller treats us to a very original character in James. This is a man zealous about two things: survivalism and his daughter. James is obsessed with finding a way to make his family safe before certain disaster arrives. He also adores his daughter. When the real world James lives in becomes more complex than he can navigate, he knows best, takes his daughter and flees. There is much that is not quite right about James.

Swimming Lessons delivers Gil, a once successful author, who gets what he wants. Gil most wants a family (though we’re never really sure why) and when the student Gil’s been having an affair with turns up pregnant, he couldn’t be happier. In rapid succession Gil marries her, moves her to the small seaside village he’s from, and then goes on living the same sort of life he always has. Gil has a “writing shed” at his home. No one is allowed in it, but him. Gil spends his days and most nights out there, but strangely produces very little writing. Still, he loves having his family nearby.

Winner: For me it’s Gil. There was very little to like about Gil. He was always out for Gil with almost no consideration for the women in his life. There was certainly a lot about James not to like, but he was a little less about himself and a little more pathetic.

Ute, Peggy’s mother in Our Endless Numbered Days, was a concert pianist. She needed to go on tour because it was what she loved and because she was the sole support of her family. Because James took Peggy when Ute was on one of her concert tours, it’s difficult not to put some blame on her. Surely she saw how strange James was acting, how out of touch with reality he seemed to be getting, and yet she left her daughter with him.

The whole story in Swimming Lessons revolves around Ingrid leaving. Fuller did a beautiful job showing the reader why Ingrid might want to just vanish. Through a series of letters to Gil, Ingrid not only recounts the history of their relationship, but lays out why she feels like everyone might be better off without her. I felt sorry for her, but I also wanted to slap her!

Winner: This is a difficult choice. Ingrid leaving permanently (versus Ute going on tour) seems a more devastating choice and it certainly was for Flora and her sister, Nan. But, when Ute left Peggy with James the result for her child was far worse. So I have to give this one to Ute.

Daughters Who Love Their Dads

In Our Endless Numbered Days, Peggy really adored her dad. He was the fun parent from the very start. He’d let her miss school to go on adventures with him, he was always interested in what she had to say and would try to teach her things. When they’re at the cabin James is all Peggy has. She believes the rest of the world is gone and Peggy clings fiercely to James for a long time. It’s only as she gets older, that Peggy begins to see cracks in the things her father has told her. Even when Peggy is back with her mother, she still loves the father who was really her captor for nine long years.

Even before her mother vanished in Swimming Lessons, Flora was a “Daddy’s Girl.” Perhaps because he was so often gone, every minute she spent with him was special. When he was gone for long periods of time, Flora drove Ingrid crazy asking about him. After Ingrid’s disappearance, Flora’s loyalty to her father was unwavering. He was still absent from much of her day-to-day life, spending most of his time in the “writing shed,” but Flora happily turned a blind eye to all of Gil’s eccentricities. Much of the story is about Flora opening her eyes to both her parent’s flaws.

Winner: Easily, Peggy. Peggy’s unwavering love of her father made perfect sense. He was all she had from the time she was eight years old until she was seventeen. All. And still, part of her was able to see through that love and realize something was off with her father. On the other hand, Flora lived with her father and sister in a town and was out in the world. She grew up around other people, had access to the world, went off to college, and still was unwilling to see her father’s foibles.

I think both of Claire Fuller’s novels are very good. I was captivated by Our Endless Numbered Days right from the start. Peggy was an amazing, insightful narrator. I liked how her story moved back and forth between the time James and Peggy were in the cabin and when Peggy was back with Ute. It was a book that was hard to put down. Swimming Lessons was a little harder to become immersed in. I didn’t really feel it picked up until about the halfway point. While Peggy was a character I adored, connecting with the characters in Swimming Lessons was more difficult. I liked Ingrid the most, but also was frustrated with her lack of gumption.

I enjoyed getting to know Ingrid and her story through the letters she was writing to Gil. It was an excellent choice on Fuller’s part. She had Flora experience people in terms of scent and color. I grew to anticipate her impression of each new person. In both books Fuller’s writing is wonderfully clear and thoughtful. Her prose are easy to read with just the perfect amount of description. From Our Endless Numbered Days:

“The rhythm of our days cocooned me, reassured and comforted me. I slipped onto it without thought, so that the life we lived – in an isolated cabin on a crust of land, with the rest of the world simply wiped away, like a damp cloth passed across a chalked blackboard – became my unquestioned normality.”

If you only have time for one Claire Fuller book, I recommend Our Endless Numbered Days, but both are worth reading.

Swimming Lessons – Grade: B
Our Endless Numbered Days – Grade: A

Note: I received a copy of Swimming Lessons from the publisher (via Net Galley) in exchange for my honest review.

Disclaimer: There are Amazon Affiliate links contained within this post.