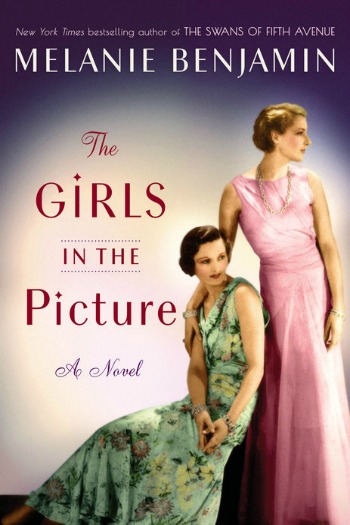 It was 1914 when Frances Marion met Mary Pickford on an early Hollywood “flicker” set, and with that meeting both their lives were forever changed.

“From the New York Times bestselling author of The Swans of Fifth Avenue and The Aviator’s Wife, a fascinating novel of the friendship and creative partnership between two of Hollywood’s earliest female legends—screenwriter Frances Marion and superstar Mary Pickford.”

Melanie Benjamin’s Storytelling – If you’ve never read Melanie Benjamin it’s time to start, and if you have, you’re in for another treat. This woman KNOWS how to build an entire drama around real people, expertly blending facts and well-researched fiction. With The Aviators Wife she gave us Anne Morrow Lindbergh. In The Swans of Fifth Avenue it was Babe Paley and Truman Capote. And now, Benjamin tells the story of young Hollywood through two of its brightest stars, actress Mary Pickford and screenwriter Frances Marion. Throughout The Girls in the Picture, Benjamin stays entirely focused on her characters. With incredible finesse she follows these two women through their struggles and triumphs, through their loves and losses, through their personal and professional relationships without ever straying. This is storytelling at it’s best!

“Mary and I were these women; we were the girls in the picture, still. The girls whose brave and tender hearts were still beating beneath the wrinkled breasts, the old-fashioned nightgowns and sensible grandmother blouses. The girls we’d become the moment we’d said hello in that other dark room, so many years ago.”

Early Hollywood – I’m not a big follower of Hollywood, old or new, but I loved the Hollywood history lesson built into The Girls in the Picture. As the book opens Hollywood as we know it didn’t yet exist. Instead, there were a bunch of people running around the streets of Los Angeles trying to put together one-reel “flickers” for kicks and a little cash. The inside view that Benjamin provided through the lives of “America’s Sweetheart” and one of its first and most successful screenwriters proved to be fascinating. These two women had amazing triumphs in their careers, but the struggles, the chauvinism, and the fight for women’s opinions to matter made it clear that Hollywood still hasn’t strayed far from its roots.

A Hollywood Legend – Of the two women in the book, I actually liked Frances Marion more, but found Mary’s position as “America’s Sweetheart” fascinating. The very roles that made her famous, those of a sweet, funny girl, also trapped her. She grew weary of playing a child, but the public didn’t want to see her in any other roles, making it nearly impossible for Mary to follow her own desires. Hers was a sad story.

Fiction vs. Nonfiction – Honestly everything about The Girls in the Picture worked for me. My only negative is one I find in all historical fiction based on real people. It’s difficult to stop myself from questioning the “fiction” part of the story is versus what is real. I start Googling events to see if they really happened or not. At times that can feel like a burden, and I found it especially true towards the end of The Girls in the Picture. Still, it’s my problem and not a problem of the book.

The Girls in the Picture proved to be an absolutely delightful surprise. I can highly recommend it to Hollywood buffs, lovers of historical fiction, and to those like me who might initially be a little skeptical. I can almost guarantee that by 20% you’ll be hooked. Grade: B+