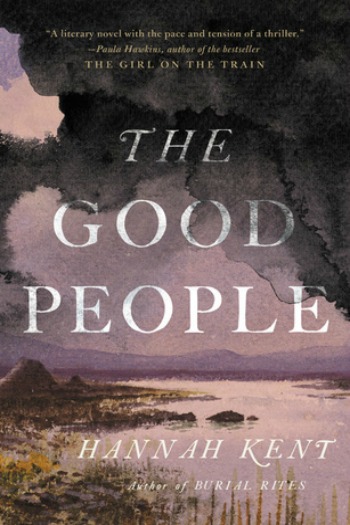 In the face of overwhelming gossip and superstition, a grandmother defies the church and turns to the supernatural to save her grandson from the fairies she believes to have taken him.

“…Hannah Kent’s startling new novel tells the story of three women, drawn together to rescue child from a superstitious community. Nora, bereft after the death of her husband, finds herself alone and caring for her grandson Micheál, who can neither speak nor walk. A handmaid, Mary, arrives to help Nóra just as rumours begin to spread that Micheál is a changeling child who is bringing bad luck to the valley. Determined to banish evil, Nora and Mary enlist the help of Nance, an elderly wanderer who understands the magic of the old ways.”

A World of Superstitions – In 1825 Ireland, living in a small rural community meant living and dying surrounded by superstition. From birth to death, and everything in between, there were superstitions to guide you. Women had it especially hard. Should a woman with child cross paths with a hare in the woods, her child would be born with a harelip. Being around death could cause her to lose her baby. Pity the woman who could not conceive, for she could be blamed for everything from crop failures to a cow’s milk drying up. And, should a child be anything less than perfect, it could only be that his or her mother had failed in some simple way.

“What had happened? What had her daughter done to lose her son? Had she not crossed his face with ashes? Not bit his fingernails until he was nine weeks old? Not sprinkled his mouth with salt, or barred his cradle with iron? All women knew how to protect their children from abduction.”

The Good People – Similar to the world of superstitions was the huge role a belief in fairies played in The Good People. In fact, that’s where the name of the book comes from because fairies were collectively known as the “Good People.” Both respected and feared, these beings were real to almost everyone in Kent’s novel, but to no one more than Nóra. Who besides fairies could explain the sudden deaths of both her daughter and husband? And, it could only be the fairies who were responsible for “sweeping” her once healthy grandson and leaving instead one of their own: a weak, crippled changeling child.

“Nóra, listen now. That boy is not Johanna’s son. ‘Tis not your grandson. ‘Tis fairy. You know that! The look of him, the wasting on him. I tell you now that the cratur is nothing more than an old, withered fairy, changed for Micheál.”

Nóra’s fight to win back her grandson from the “Good People” was at the heart of this unusual historical fiction.

The Catholic Church vs. Its Faithful – The Catholic Church often fails to fare well in literature and The Good People was no exception. In a Catholic country dominated by folklore, people easily lived with both the myths they’d grown up with and their faith. The Church sought to be the voice of reason, seeking to end practices of spells, magic and belief in changelings and fairies. Unfortunately, the local priest used a heavy hand, demanding rather than teaching. He offered no other solutions and certainly no support to Nóra, or those trying to help her. Instead, the Church threatened to banish those who couldn’t bring themselves to abandon the beliefs they’d held for generations. The Catholic Church proved to be a nice little villain here.

Use of Old Irish – Kent used quite a bit of old Irish phrasing/words in her story. Most of the time I was clear on meanings, but still would have liked for a glossary to be included.

A Hole in the Story – Micheál, Nóra’s grandson, was central to this story, and yet we knew very little about him. I understand that the reader knew as much as the characters in the book did, but still I wanted more. I found myself constantly wondering what had happened to him and what his actual diagnosis might be. Knowing more would have better filled out the story for me.

A Harsh Climax – I don’t want to include any spoilers, so I’ll simply say that I had a hard time with both the climax of The Good People, and the events that followed. It left me sympathetic to (but caring for few) characters in this novel.

While I found many parts of Hannah Kent’s sophomore effort interesting, I cannot say that I truly liked the book. Too often the flow of her story got bogged down in an abundance of detail, some of which became repetitive. A tighter story would have been more to my liking. This would be a great book for those who have a fondness for Irish lore, or who would like to know more about the Church’s role in Ireland’s colorful history. Grade: C+