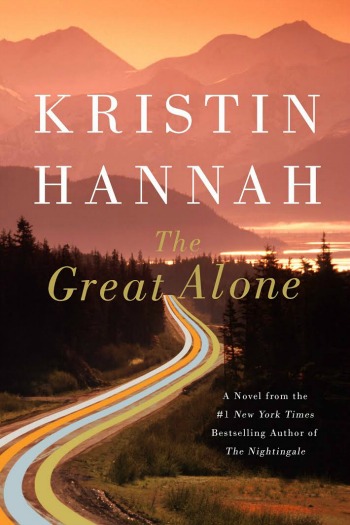 When the emotionally fragile Allbright family makes the impulsive move to settle in Alaska, they’re ill prepared for the harsh realities of such a life, and even less so for life with each other.

“Cora Allbright and her husband Ernt, a recently-returned Vietnam veteran scarred by the war, uproot their thirteen-year-old daughter Leni to start a new life in Alaska. Utterly unprepared for the weather and the isolation, but welcomed by the close-knit community, they fight to build a home in this harsh, beautiful wilderness.”

The 70’s Done Right – Kristin Hannah’s setting of her story in the 1970’s could not have been done better. From the everyday to the horrific, The Great Alone was steeped in the culture of the decade. Musical references, including “Midnight at the Oasis, Come On Get Happy, and Bad, Bad Leroy Brown,” kept the reader firmly in the 70’s. Concerns around the Patty Hearst kidnapping, plane hijackings, and the series of murders going on in the Seattle area (later found to be Ted Bundy) gave the story weight. And then there was the Vietnam War and the politics surrounding it. That war, so divisive for our country, Ernt Allbright experienced as a POW. Returning home, he was a changed man, afflicted with what we now know to be PTSD, a diagnosis that didn’t exist in the 70’s.

Alaska In All Its Glory – Alaska, herself, was definitely one of the main characters in The Great Alone, and perhaps the one I enjoyed getting to know the most. Hannah clearly has a love for the forty-ninth state and has spent quite a lot of time there. Her words brought the state’s wild beauty to life at the same time they highlighted the unforgiving nature of a land of such extremes. In the very remote community where the Allbright family landed life was dependent on being prepared at all times, but never more so than for each coming winter. The gorgeous and brief Alaskan summers were nothing but work: growing food, preserving food, hunting food, dehydrating food, storing food. All in preparation for the long, dark, long, dark winters to come. In this startling backdrop, Hannah populated The Great Alone with a cast of supporting characters as varied, rugged, and resilient as the state itself.

A Tough Theme – When Ernt Allbright returned from Vietnam, he was a changed man. He was depressed. He couldn’t keep a job. He trusted almost no one.

“Her father looked up, just enough to make eye contact. He looked ruined, tired, but present; in his eyes, she saw more love and more sadness than should exist in one human being. Something was tearing him up inside even now. It was the other man, the bad man, who lived inside of him and tried to break out in the darkness.”

And, Ernt was violent. I’m not giving much away to say that his violence spilled over to his family, and especially his wife who continued to love Ernt. While this was difficult to read, it also felt historically accurate on significant levels. First, with no PTSD counseling or support, men returning from war often have been abusive to their families. Further, such abuse has often been excused. Second, The Great Alone takes place before there was much know about battered-woman’s syndrome, and prior to such a thing as the battered woman’s defense. While I’d have liked Cora to feel she had other options, I also see that it wouldn’t have felt that way to her. I thought Hannah’s handling of this tough subject was real.

A Daughter’s Awakening – Ultimately The Great Alone was Leni’s story, as she learned to navigate the truth and beauty of Alaska while simultaneously navigating the wilds of her own parent’s marriage. I liked that Leni had to open her eyes to the true nature of both her parents’ deep flaws. I just wish she had done so a little more quickly.

The Resolution – Related to my last section of what worked, I’d have liked to see Leni facing reality a little more quickly and for her to have been more decisive in her choices. For me, this is where The Great Alone began to break down. I don’t want to give too much away, but I think that in the last 20% of the book Hannah had far too many unlikely scenarios and too many plot elements that just didn’t add up. I found myself confounded by actions from Leni and others that seemed out of character and felt forced.

A Neat and Tidy Ending – The kiss of death for me, especially in a heavy story such as this.

The Great Alone is a difficult book for me to assess. Had I done so at the 80% mark, I’d most likely have given it a very high rating, but the last part of the book cast a dark shadow over the rest. I grew more and more disappointed the closer I drew to the end of The Great Alone. Sadly, the disappointment must carry equal weight with all that was right in this one. Grade: B-