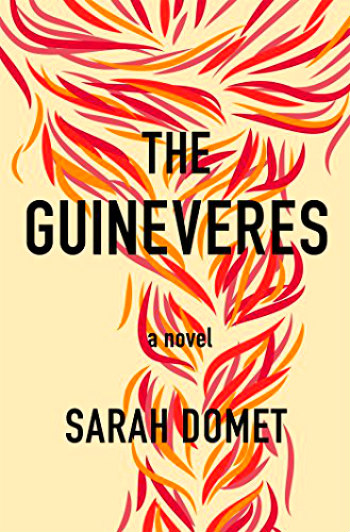 Single Sentence Summary: Four young teenage girls, all named Guinevere, find they’ve each been delivered to the Sisters of Extreme Adoration convent, and want nothing more than to find a way to leave it.

Synopsis: In a time of war, and need girls are being left in the care of Sister Fran at the Sisters of Extreme Adoration convent. The reasons all vary, but no girl really understands why.

“Each of us had our own story. Usually, our parents whispered that they loved us; they told us to behave. Our mothers gave us lipstick kisses on our checks, or our fathers said they hoped someday we’d understand. Then they drove away for good, up the one-lane drive and into a world that was easier without children. They all had their reasons.”

Vere, at 13, is the first Guinevere to be left at the Sisters of Extreme Adoration convent. We don’t learn her backstory until late in the book, but like all the girls left at the convent, Vere longs to belong somewhere, anywhere. Next to arrive is Ginny, a fragile girl who sees herself as an artist, like the father she adored. Win is left next. She’s a girl with a tough exterior, but only because she’s been put in the position of protecting her own heart. Finally, Gwen, too, is left at the convent. She leads the girls in make-up, bra-stuffing, rolling up skirts, and is completely devoted to grooming.

The four Guineveres are initially drawn to each other because of the name they share, but it quickly becomes more than that. They trust and care for each other and have the common, single-minded goal of leaving the convent. They are determined to find a way out just as soon as they can figure out a plan to make it happen. At the start of The Guineveres, the girls have devised a scheme to escape the convent, but of course, their plan fails. The Guineveres each confesses her sin of wanting to leave and the role she played in the plot. As part of their penance, the girls are assigned to work in the Sick Ward. It’s a place that was a “repository of old men and women.” That is, until the day when the Sisters of Extreme Adoration were called upon to be part of the War Effort. The convent takes in five soldiers so severely wounded that they’re in comas. One of these boys wakes and is sent home with an older girl along to help nurse him. When the Guineveres witness this amazing turn of events, they quickly see these young men as their way out! Their devotion to “Our Boys” grows in proportion to their dreams of a normal life.

Review: One of the many things I liked about The Guineveres, Sarah Domet’s debut novel, was how the whole story was wrapped around Catholicism. Most chapters were titled and had something to do with a part of the Catholic calendar or a teaching of the church. Interspersed throughout the book were short chapters about young female saints, always devout, and often virginal. These chapters served to teach the girls lessons, but also provided the reader with a taste of the education the Guineveres were getting. Sister Frances, as well as a priest, Father James, played important parts in the Guineveres’ lives.

The story is set in no definite place and at no definite time. I surmised that the era had to be sometime after WWII and before Vietnam and the place, somewhere in the East or Midwest. At first I was bothered by the lack of specificity, but then I realized it didn’t matter, because this was the Guineveres’ story. The place and the war were just backdrops to them. I loved the fragile friendship of these girls and the vulnerabilities they shared as teens struggling to come into adulthood in a place that wasn’t home. The author gave the reader glimpses into their adult lives, and I was happy to know they made it through their convent years. I loved how Sarah Domet shared each of the girls’ “Revival” stories (how they came to be at the convent) in separate chapters of the books. These chapters were the only ones not narrated by Vere and they were spread throughout the novel. The revival stories provided great insights into who the girls were.

I thought the writing was gorgeous and true to the Guineveres. I highlighted so many beautiful passages and I loved the ending of their story. That said, I think the book will be a little slow for some readers. The pace didn’t bother me, but I also have a Catholic background and I wonder if people without that will get a little tired of the amount of church related themes in this book. Overall, I liked The Guineveres very much and I think many other readers will, too. Grade: A-