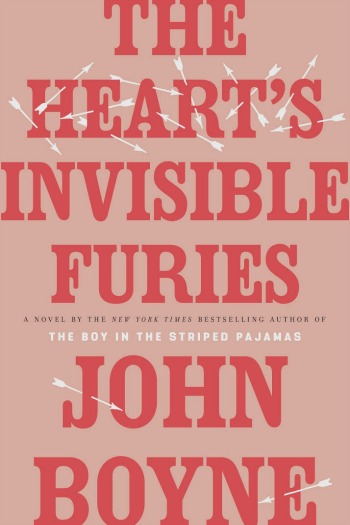 A stunning seventy year journey following Irish-born Cyril Avery as he spends a lifetime coming to understand himself, his friendships, his family, and his country.

“The Heart’s Invisible Furies is a novel to make you laugh and cry while reminding us all of the redemptive power of the human spirit.”

A Story of Relationships – The Heart’s Invisible Furies proved to be a book about relationships above all else. As anyone will, Cyril encountered many people who factored into his life in ways big and small. His earliest relationships included his adoptive parents, Maude and Charles, who never let Cyril forget that he “wasn’t a real Avery.”

“I always called them Charles and Maude, never “Father” and “Mother.” This was on Charles’s insistence as I wasn’t a real Avery. It didn’t bother me particularly but I know it made other people uncomfortable and once, in school, when I referred to them thus, a priest punched me around the ears and told me off for being modern.”

Next came Julian, the boy Cyril fell in love with at seven, and longed to be with for decades. Along the way were so many more people who came into Cyril’s life. Particularly beautiful in this book was the way John Boyne wove relationships into and out of Cyril’s life. Told at seven-year intervals, the cast of players had often changed in each new section. You were never quite sure, as a reader, when and how you might encounter a character again, but encounter them you did.

This Man Knows How to Write – Thank you John Boyne! With his story told in first person, Boyne saw to it that the voice of Cyril Avery rang strong and clear throughout. His story unfolded seamlessly even with large jumps in time. The art of great dialogue sometimes seems to be lost in pages and pages and pages of descriptive prose. It can get tiresome, as a character in this book pointed out, but that is certainly not the case with Boyne. Descriptions were there to set the stage, but dialogue, great literate dialogue, was the star of The Heart’s Invisible Furies, and I for one loved it.

A Personal Connection – I had a very personal reaction to Cyril’s story. My maternal grandfather was gay, though probably twenty or more years older than Cyril. He married and produced four children before he and my grandmother parted ways. After that he lived alone, saw his kids from time to time, sometimes had other men around, and died young –  when I just a baby. His being gay was something of a family secret. I didn’t find out about it until I was an adult. As I read Cyril’s story, I found myself constantly considering the grandfather I never knew, and how hard his life must have been. Much of The Heart’s Invisible Furies focused on how difficult it was to be gay in the very Catholic-led Ireland of the 40’s, 50’s, 60’s and beyond.

“It was 1959, after all. I knew almost nothing of homosexuality, except for the fact that to act on such urges was a criminal act in Ireland that could result in a jail sentence, unless of course you were a priest, in which case it was a perk of the job.”

Being gay cost Cyril a great deal. I imagine my grandfather paid a similar price.

Laughter and Tears – Boyne included so many funny parts in this novel, especially in the conversations Cyril had with others. It was particularly funny when Cyril gave straight answers to some of the ridiculous things others said to him. It’s a serious book, but the generous portion of humor kept it at just the perfect emotional level. There were quite literally times where I was laughing and crying on the SAME page!

If I Have to Pick Something…the Epilogue – Like many epilogues, it wasn’t really needed. The Heart’s Invisible Furies was already a beautiful package. It didn’t need that last bow. I think a final update was unnecessary for the reader, but in consideration of Irish history I understand why Boyne wanted to include it.

Sometimes you read a book and are lucky enough to get much more than you bargained for. That’s certainly the case with The Heart’s Invisible Furies where the reader is treated to well-crafted writing, a lesson in Irish history/progress, and and the tale of a man’s life exquisitely woven together into a picture I won’t soon forget. With absolutely no reservations, I highly recommend The Heart’s Invisible Furies. Grade: A