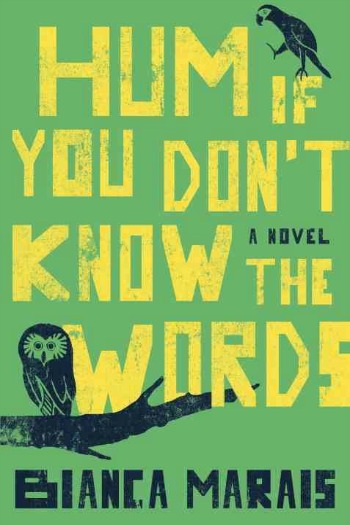 On a fateful day in June 1976, violence on the streets of Soweto forever entwines the lives of two most unlikely allies.

Life under Apartheid has created a secure future for Robin Conrad, a ten-year-old white girl living with her parents in 1970s Johannesburg. In the same nation but worlds apart, Beauty Mbali, a Xhosa woman in a rural village in the Bantu homeland of the Transkei, struggles to raise her children alone after her husband’s death. Both lives have been built upon the division of race, and their meeting should never have occurred…until the Soweto Uprising…”

Build Up of Anticipation – Right from the start, Hum if You Don’t Know the Words builds suspense. What is going to happen to Robin’s parents? Where is Beauty’s daughter? How will their stories link? What happened to Nomsa? I would in no way classify the book as a suspense novel, but there were just enough questions to really keep me engaged.

South African History Lesson – I like to learn from books and Hum if You Don’t Know the Words delivered on that front. On June 16, 1976, in response to a government decree requiring all black schools to teach Afrikaans (the language associated with Apartheid) students in Soweto led a peaceful protest rally. That rally quickly became violent as police intervened. Death counts range from 100-7oo with thousands injured. The uprising marked the turning point in the fight to end Apartheid and was what Bianca Marais used as the catalyst for her debut. Unknown to Beauty, her daughter acted as a leader in the rally and vanished in the violence. Ten-year old Robin’s parents were murdered that same evening. Throughout the book Marais gives glimpses into prejudice running rampant in South Africa, but also the flipside: whites and blacks fighting for change. She wisely used Robin to embody the change struggling to find footing in the South Africa.

A Mother’s Anguish – I loved Beauty in this story. When she got word that her daughter might be headed for trouble, Beauty made the difficult decision to leave her two sons, travel to Johannesburg, and bring Nomsa home. After the uprising, Beauty used every resource she could to stay in Johannesburg and search for her missing daughter. The love and emotion surrounding Beauty were remarkable. When she gets word her daughter is being trained as a “freedom fighter,” Beauty’s struggle NOT to see Nomsa as a terrorist was heartbreaking; her anguish, palpable.

“…If we ever taste victory, will out fighters lower their fists and live in peace or will they always be looking for the next conflict? I despair that we are all becoming murderers, white and black alike, and that we will never be able to wipe this blood from out hands. I pray that I am wrong.”

Cat – Robin had an imaginary friend, Cat. At first this seemed endearing, but quickly got old for me. I understand Robin needed Cat after her parents were killed, but Cat was there even before that happened and I’m just not sure why. I found the play between Robin and Cat to be annoying.

Robin – Make no mistake, for the most part I really liked Robin. My heart went out to this poor girl trying to bravely carry on under horrendous circumstances. However, in the last third of the book, I felt like Robin’s side of the story became too unrealistic. A couple of different incidents leading up to the book’s climax, I had a difficult time suspending my disbelief of. Those were quickly followed by some valuable “lesson learning,” on Robin’s part that was also difficult to swallow. Robin’s wisdom seemed far, far beyond her years.

Despite seeing flaws in Robin, I really liked Hum if You Don’t Know the Words. The strength of Beauty’s character made up for any weaknesses in Robin’s. I would have liked to see more resolution in Beauty’s story. It almost felt like Marais was leaving loose ends for a sequel. The book holds up well to comparisons with The Help and The Secret Life of Bees. If you liked those and would enjoy similar themes, but in a whole new setting then you should definitely add Hum if You Don’t Know the Words to your book list. Grade: B