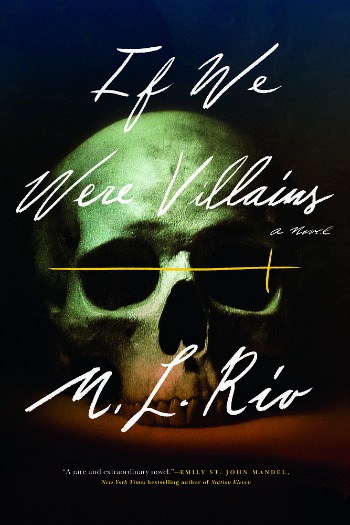 Single Sentence Summary: At an elite art college, seven young acting students (performing only Shakespeare) are the best of friends until one is found dead and another is charged with the murder.

Primary Characters: If We Were Villains is a story that centers on seven students from a private conservatory in Illinois. All play a prominent part in the story. Oliver, newly released from prison, narrates.

Synopsis: Richard, Meredith, Filippa, Alexander, Wren, James and Oliver are the seven remaining fourth-year acting students at Dellecher Classical Conservatory in Broadwater, Illinois. At this elite art school the number of students moving on is pared down every year leaving only a handful to finish each program. Those in theatre perform Shakespeare exclusively. The seven actors are very close. They live together, attend classes together, act together and socialized together. They’ve made it to the top and are excited for the year ahead. When the expected castings change just a little, tensions mount until one is found dead and the others are left trying to convince themselves and the police that none are to blame.

Review: If We Were Villains is an absolutely incredible debut. I don’t think I’ve enjoyed another book more this year. Bravo to M. L. Rio! If We Were Villains has been compared to Donna Tartt’s The Secret History. Comparing a new book to another beloved book is a big risk. Often times doing so sets the reader up for disappointment. That did NOT happen here. If We Were Villains constantly reminded me of The Secret History, one of my all-time favorite books.  Both take place at a small college where the key players study some sort of “classics.” Both involve a group of close friends. And, both involve a killing. More importantly though, both are books I could not put down!

The cast of characters in this book is studying and performing Shakespearian plays. Their love of Shakespeare is why they are at the school. It’s also why they have developed a common affectation of peppering their conversations with snippets of quotes from The Bard. Initially, this might be a little off-putting to some readers. For me it was just a part of who the characters were, and it was something I quickly grew used to. Not being a real follower of Shakespeare, I felt like If We Were Villains schooled me a little. I’ve not been to anything by Shakespeare in years, but now think I’d like to try him again.

A cast of seven characters can get cumbersome, but that didn’t happen in If We Were Villains. Rio was able to develop each of her characters into very real people that I felt like I truly knew. I didn’t always like each one, but I eventually understand them. It was compelling to watch the slow disintegration of their friendships.

“The moral outrage we should have suffered was quietly put down, like an unpleasant rumor before it had a chance to be heard. Whatever we did – or, more crucially, did not do – it seemed that so long as we did it together, our individual sins might be abated. There is no comfort like complicity.”

Rio logically set her book up using a play motif. Divided into five acts, each started with a prologue featuring Oliver in the present. The remaining parts of each act were broken into scenes, telling the story of what happened to the seven friends during their final, fatal year of school. The build up of tension, both between the friends and within the plot as a whole, was palpable. The nervous energy it created made it impossible for me to put this book down. If We Were Villains is truly a MUST read book! Grade: A

Note: Thank you to Macmillan for providing me a copy of this book (via NetGalley) in exchange for my honest review.