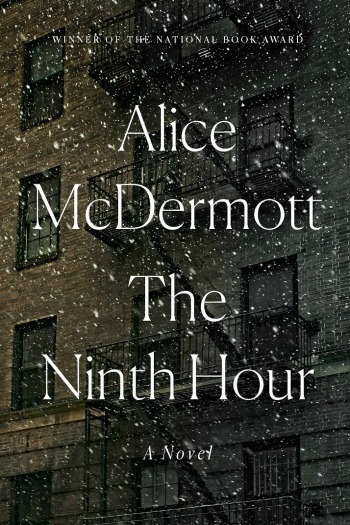 Annie, left widowed and pregnant, finds herself taken under the wing of a group of Catholic nuns, determined that Annie and her child will have lives well lived.

“On a dim winter afternoon, a young Irish immigrant opens the gas taps in his Brooklyn tenement. He is determined to prove―to the subway bosses who have recently fired him, to his badgering, pregnant wife―“that the hours of his life belong to himself alone.” In the aftermath of the fire that follows, Sister St. Savior, an aging nun appears, unbidden, to direct the way forward for his widow and his unborn child.”

Little Nursing Sisters – The convent at the heart of The Ninth Hour fell under the umbrella of “The Little Nursing Sisters.” It was their job to go out in the very Catholic Brooklyn community and nurse those who were sick or suffering. Their calling involved what we would consider traditional nursing, but went way beyond that. For those in need, the sisters would also cook, clean, take in laundry, provide company, and sustenance for the souls of the sick. I couldn’t help thinking what a great service these women provided.

A Little Bit of Meddling – When Sister St. Savior happened onto the scene of a suicide, she quickly resolveded to take the young widow, Annie and her unborn child, under her wing. For rest of their lives, Annie and Sally were loved and cared for by the Sisters in this small nursing convent. The sisters made sure Annie had a job where she could have her baby near. They maneuvered another young woman into the role of Annie’s best friend and confidant. They even made sure Annie had for a life of her own. The sister’s adored Sally and were always present in her life, always supporting, but gently nudging her along the way.

Annie – Annie could easily have become a one-sided character under the tutelage of the sisters, but McDermott didn’t let that happen. Instead, Annie became a woman that was easy to admire. With few options, and a little help, Annie built a good life for herself and her child. She was spirited and willing to forge her own way, not always living by the standards of the nuns or the Catholic community in general.

“You spoke up,” she wanted to tell her friend, spoke up against the lousy certainties life had given her: a dead husband, a daughter to raise alone, daily labor, daily loneliness, dull duty. She said, in fact, when next she and Annie met, “An hour or two of an afternoon isn’t much of a sin.”

Beautiful Writing – It’s easy to see why Alice McDermott has been nominated for so many awards. Her writing was exquisite and her descriptions vivid. A a reader, I was absolutely transported to the gritty streets of 1930’s Brooklyn. I knew what it felt like to work in the convent’s laundry room, to a sit on a train next to a dirty, crass woman, or to enter the sickroom of a one-legged patient.

Slow to Build – I liked so much about The Ninth Hour and still it didn’t really take off for me until the last 20%. As I read the book, I kept feeling like my interest was just on the verge of soaring, and then it would drop again. The Ninth Hour had too much background for my taste. Some of it muddied the storyline which ebbed and flowed for me.

Too Much Angst – The Ninth Hour is a story of the Catholic faith within the confines of this small Brooklyn convent, but even so, I grew tired of some of the Catholic guilt and need for penance for sins big and small. I also grew weary of a storyline having to do with a side character’s dying father and guilt he held over a choice from his youth.

In the end, I’m glad I read The Ninth Hour. McDermott’s writing alone makes it well worth the time. Add to that Brooklyn in its heyday, and the amazing Little Nursing Sisters with their protective calling and you have a really interesting little historical fiction. Grade: B-