Nonfiction November, already in its third week, has my TBR list growing at an alarming rate! This month-long event places the spotlight on lots of wonderful nonfiction and is organized by Katie at Doing Dewey, Lory at Emerald City Book Review, Sarah at Sarah’s Bookshelves, Julie at Julz Reads, and Kim at Sophisticated Dorkiness. (Kim is this week’s link up.) 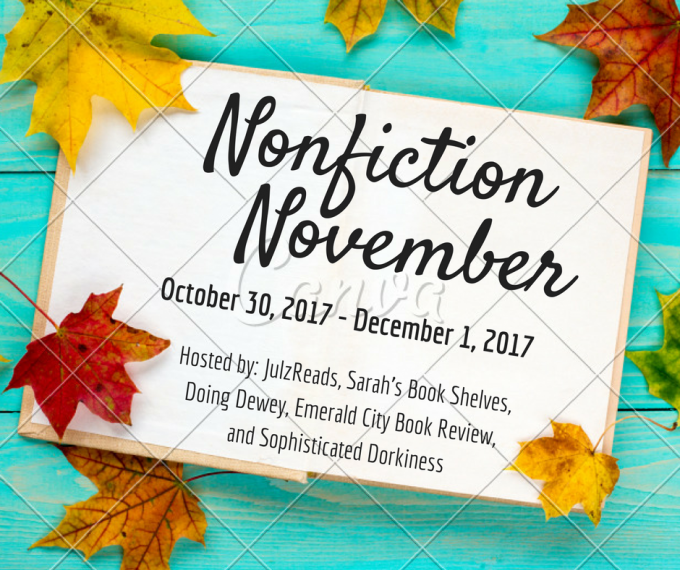 In this week’s challenge readers were asked to be “experts” in one of three ways: share 3 or more books on a single topic that you have read and can recommend (be the expert), put the call out for good nonfiction on a specific topic that you have been dying to read (ask the expert), or you can create your own list of books on a topic that you’d like to read (become the expert). I decided to combine my new review of Code Girls with “becoming an expert” on women and their roles during World War II. WWII has long been a favorite topic of mine in novels, so the jump into nonfiction was a natural. Code Girls piqued my interest on both code breaking and other roles women played in WWII. 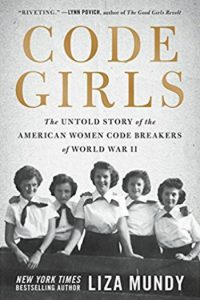 From the Publisher: “Recruited by the US Army and Navy from small towns and elite colleges, more than 10,000 women served as codebreakers during World War II. While their brothers and boyfriends took up arms, these women moved to Washington and learned the meticulous work of codebreaking. Their efforts shortened the war, saved countless lives, and gave them access to careers previously denied to them. A strict vow of secrecy nearly erased their efforts from history…”

My Thoughts: From start to finish, I found Code Girls to be absolutely fascinating. Liza Mundy brilliantly researched and then told the story of women code breakers during WWII. Her book had three main areas of focus: the skill/art of code breaking, the extensive role of broken codes in the winning of WWII, and (my favorite) the lives of the women at the heart of this new found skill.

I listened to Code Girls on audio and that may have hurt my understanding of exactly how some of the codes and their subsequent breaking worked, but still it was fascinating. Being a math teacher, I like numbers and the puzzle of numbers. Hearing Mundy describe the detailed work that went into deciphering codes almost made me want to go back in time and be one of the women working to unearth meaning from the jumble of letters and numbers containing the secrets and battle plans of the Japanese and Germans.

So many movies and books focus on the battles of WWII or the horror of the camps, but the behind the scenes work often has gone unrecognized. It was eye-opening for me how the information gleaned from small bits of enemy code turned the tide of the war. Broken Japanese code directly contributed to the Allies win in the Battle of Midway and many others.

For me the very best part of Code Girls was the interspersing of real women’s lives as they worked as code breakers. These women were actively recruited from colleges and classrooms around the U.S. Women with few options before the war found themselves in exciting new roles, living independent lives they’d never dreamed of. The women were proud of what they were doing for the war effort and to help save their brothers, their neighbors, their future husbands. Mundy followed many women working for the Navy and Army throughout her book, adding so much life and color to her lesson in history. I grew to admire these women and their indomitable spirit. The war created a tiny time period of female power that sadly, was quickly lost with the arrival of peace and the return of the men. Women of this “greatest generation” turned out to be years ahead of their time. Grade: B

Narration: Erin Bennett did a fabulous job reading Code Girls. Some of the more technical aspects could have easily gone south, but Bennett sustained my interest even through those parts. Grade: B+

{More Books on Women of WWII} 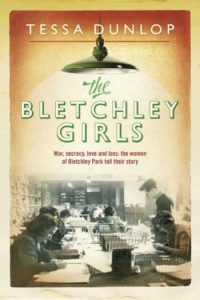 The Draw: After reading Code Girls I want to find out more about their British counterparts at Bletchley Park in England. Like the American girls, the code breakers working for the British were plucked out of their lives to help in the effort to defeat the Germans. 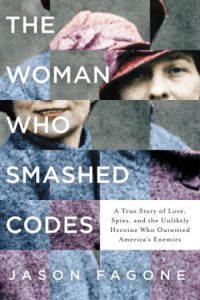 The Draw: Elizabeth Friedman made several appearances in Code Girls as one of the very first woman seriously working in code breaking and I’d like to know more about her. Married to another code breaker, Elizabeth and her husband were at the very heart of deciphering both Japanese and German codes. 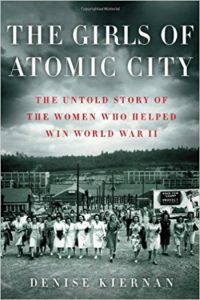 The Draw: A secret city where thousands of women worked during the war without ever being really sure what they were working on? That alone makes me want to know more, and the fact that it comes highly recommended by Tara @runningnreading has me all in!

What books have you read about women’s contributions during WWII?