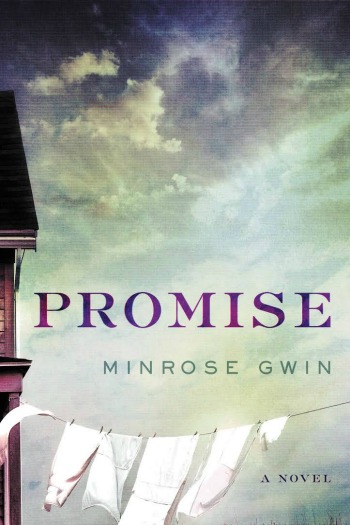 Dovey does the laundry for Jo’s family, but in the wake of disaster the women find they’re much more alike than they ever could have imagined.

“In the aftermath of a devastating tornado that rips through the town of Tupelo, Mississippi, at the height of the Great Depression, two women worlds apart—one black, one white; one a great-grandmother, the other a teenager—fight for their families’ survival in this lyrical and powerful novel.”

Realities of a Natural Disaster in the 1930’s – We all know what it’s like when tornados, hurricanes and earthquakes strike today. We often times witness the devastation as it’s happening and we see how quickly people respond and aid arrives. Now go back 80 years and think how different it would be, especially for the people of that time. The tornado at the heart of Promise actually happened and the people had NO warning that it was coming. Minrose Gwin did a wonderful job combining historical facts with fiction to share what that experience might have been like. Buildings, cars, animals and people were sucked up into the air. At the heart of Promise are two babies plucked from their mothers’ arms. As in disasters today, people were quick to help, but the quality of help was limited and much slower. I found the historical aspect of Promise fascinating.

A Study of Casual Racism – There can be no doubt that 1930’s Mississippi abounded with racism, and Gwin addressed this in ways both big and small. The differences in the homes of whites and blacks also made a difference in survival rates. The bigger, sturdier homes of whites offered so much more protection. After the disaster, Dovey was expected to help out a white family even as she was searching for her own family. A hospital for whites sprung up much quicker than the one for blacks. White citizens were taken by train to Memphis, while blacks were poured into boxcars. Different morgues were set up. Even with a storm that saw no color boundaries, boundaries were everywhere.

S.L.O.W. – I don’t mean to be dramatic, but Promise was often just too slow. There was a lot of repetition that just wasn’t necessary and I felt like the author often went off on tangents that added little to the story. I skimmed quite a bit and that’s never a good sign.

Repetitive Events – A couple of similar events running throughout a story can be the cornerstone of what makes it great. I felt like there were too many in Promise: girls being “bothered” by boys, confused identities, dreams that made no sense, women fainting, being unable to find family. The fact that repetition happened so often, took away from the events that were truly important to the story.

Bird Imagery – Gwin used a lot of bird references and bird imagery in her novel. I felt like she was hitting me over the head with it, but more than that, it added nothing to the heart of her story. I could have easily done without all of it.

“That morning the flutter had taken up residence in her upper thigh; she had watched the skin jump with it. Was she becoming a bird? Since the storm, she flew through her dreams. She flew without fear, with a steady heedless curiosity; nothing could hold her down, not the sweet dear earth, not the people who held her life in place. She wondered if she were getting ready to die.”

While I enjoyed much of the heart of the story that was Promise, overall I cannot recommend it without serious reservations. I think the book would have been much more interesting had it been more selectively edited, and had it stayed focused on the heart of Dovey’s and Jo’s stories. Grade: C