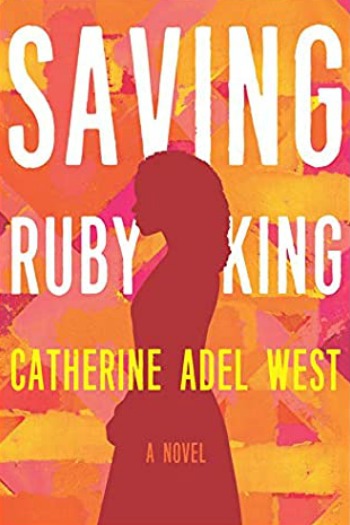 Ruby King and her best friend, Layla, share a complicated history between their families, so after Ruby’s mom is murdered, Layla will stop at nothing to protect her friend.

“When Ruby King’s mother is found murdered in their home in Chicago’s South Side, the police dismiss it as another act of violence in a black neighborhood. But for Ruby, it’s a devastating loss that leaves her on her own with her violent father. While she receives many condolences, her best friend, Layla, is the only one who understands how this puts Ruby in jeopardy.”

I’m going to jump right on the Saving Ruby King bandwagon because I simply could not put Catherine Adel West’s debut down! This is the story of two VERY connected Black families in Chicago. The different family members have been in each others lives going back generations, usually friends, sometimes foes, sometimes more. As the title implies, 24-year old Ruby King has reached a crisis point in her life. Her beloved mother has just been murdered and many suspect her father, a violent man whom Ruby fears. Her best friend Layla worries that, in her grief, Ruby might try to harm herself, as she did once before.

“And I could hear her thoughts though she didn’t speak them out loud. She wanted to get me away from my home and have a home there with her, and I’d wanted that more than anything, but then Mom would be left alone with him. The complicated lines and knots of love are difficult to untangle, they coil again into something unmanageable and not easily pulled apart.”

West told her story from five different perspectives which was needed because no one person held all the pieces to their complicated histories. Layla and Ruby both narrated, and so did their fathers. Layla’s father, Jackson was the preacher for the neighborhood’s Hope Church, and he was a man haunted by mistakes in his youth. Ruby’s father Lebanon seemed to be just plain evil, but he was dealt a cruel hand in life.

“Me and Sara are tethered by time and hate, by blood and broken promises and dreams, and even more fractured beliefs of who’s guilty for what’s happened between us. Without Sara, who do I blame for…being me?”

The final narrator was The Hope Church itself, a place of worship that has seen it all over the years, a building that knew each family member’s hidden secrets. No one was quite what they first appeared, so the Church spoke volumes. Saving Ruby King was a beautifully written, multi-layered story that not only explored the entangled relationships of these two families, but also placed them firmly in Black America and gave great insights into what that looked and felt like through the lens of her characters. If you haven’t done so already, I highly recommend getting your hands on a copy of Saving Ruby King. It’s one of my favorite books this year! Grade: A