A Separation by Katie Kitamura is a book that has generated a lot of buzz. It’s been on dozens of “must read” lists over the last few months. Now that A Separation has been out for a couple weeks, I think it’s time for a little chat about this book that’s been eliciting some strong opinions. WARNING: SPOILERS AHEAD (But first, the basics!) 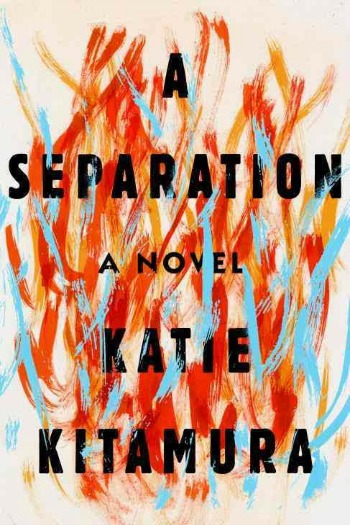 Publisher’s Synopsis: A young woman has agreed with her faithless husband: it’s time for them to separate. For the moment it’s a private matter, a secret between the two of them. As she begins her new life, she gets word that Christopher has gone missing in a remote region in the rugged south of Greece; she reluctantly agrees to go look for him, still keeping their split to herself. In her heart, she’s not even sure if she wants to find him. As her search comes to a shocking breaking point, she discovers she understands less than she thought she did about her relationship and the man she used to love.

A searing, suspenseful story of intimacy and infidelity, A Separation lays bare what divides us from the inner lives of others. With exquisitely cool precision, Katie Kitamura propels us into the experience of a woman on edge, with a fiercely mesmerizing story to tell.

My Thoughts: Had I only read the publisher’s blurb (above), I would have had different expectations about A Separation. I wouldn’t have been looking for a book full of twists and turns, but even so, would have believed I was getting a much more tense, suspenseful novel than was delivered. Unfortunately, there were other sources leading me to believe that this was a significantly different book than it proved to be. A few blurbs:

“A Separation looks poised to be the literary Gone Girl of 2017.” —The Millions

“A young translator re-examines memory and motivation when she goes in search of her faithless, soon-to-be ex-husband after she discovers that he’s gone missing in a remote part of Greece in this intimate, psychological mystery.” —The Boston Globe

Just after a young wife agrees to separate from her philandering husband, he goes missing. —Entertainment Weekly

Make no mistake about it, this was no Gone Girl and there was almost no suspense! Now that I’ve finished A Separation, I can see that many of the headline accounts about it can be interpreted more in the light of what the book was, a very long musing on marriage. Had I read more carefully, I might also have picked up on that fact. That’s on me, but never-the-less I feel led astray by some of the press. Even on Kitamura’s website, these inaccurate descriptions are quoted (along with others that are much more true to the book). This was not a whodunit and there was very little mystery.

Connecting with the Main Character:

My thoughts: I can and often do like a book even if I don’t care for the main character(s). The most obvious example might be Lotto and Mathilde in Fates and Furies. I didn’t really like either of these characters, but still loved the book. A more recent example is Allis and Bagge in The Bird Tribunal. It was a great book despite two very unlikeable characters.

I definitely did not connect to the narrator (we never get a name) of A Separation, but the problem went much deeper. I actively disliked her. This was a very annoying woman, quick to pass judgement on everything and everyone: the state of her marriage, the state of others’ marriages, how other people felt, what other people were thinking, what motivated people to do the things they did. I wanted OUT of her head. Since, A Separation is really a one woman show, connecting with its narrator was critical and something I completely failed at.

My thoughts: I decided to take a chance on the audio version of A Separation even though the narrator, Katherine Waterston, appeared to be new to narration. (She had no previous books listed.) Unfortunately, it was a risk that didn’t pay off. Waterston read so s-l-o-w-l-y I had to listen at 1.25 speed and her affect was so flat that it did nothing to give the book’s narrator any personality at all. (Perhaps, that’s what they wanted?) Waterston is an actress (Fantastic Beasts and Where to Find Them), who has also purchased the movie rights to A Separation. That should be interesting! A story told in first-person, needs especially great narration. That person IS the story, and in my opinion Waterston failed miserably at breathing any life into it.

Still, I tried very hard to keep the two narrators separate. I don’t think I’d have liked A Separation any better had I read it. In fact, I think it would have ended up being a “did not finish” book for me. Listening allowed me to do other things at the same time (drive, make dinner, etc.), so it wasn’t a complete waste of time.

WHAT DO YOU THINK? PLEASE, ADD TO THE DISCUSSION!