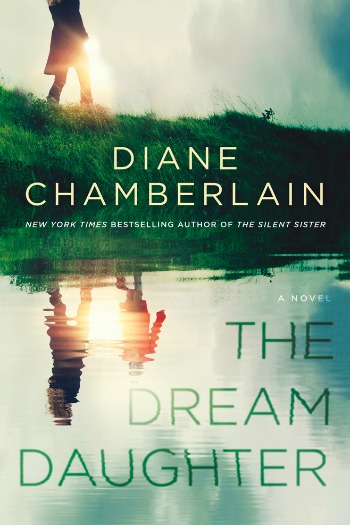 A young woman discovers what matters most in her life as she journeys through time to save the life of her unborn daughter.

“When Carly Sears, a young woman widowed by the Vietnam war, receives the news that her unborn baby girl has a heart defect, she is devastated. It is 1970, and she is told that nothing can be done to help her child. But her brother-in-law, a physicist with a mysterious past, tells her that perhaps there is a way to save her baby. What he suggests is something that will shatter every preconceived notion that Carly has. Something that will require a kind of strength and courage she never knew existed. Something that will mean an unimaginable leap of faith on Carly’s part.”

Time Travel – I’m not giving anything away here by telling you The Dream Daughter involves time travel. It’s already out there and it is impossible to talk about this book without mentioning it, but I’ll keep details to a minimum and WARN you the one time I share what might be a spoiler. So, about the time travel: Chamberlain used movement in time as a catalyst to her bigger story of a mother’s love for her daughter and her loyalty to family. For most of the book the travel was NOT the focus, and was done in a way that the premise was easy to accept.

Moving from 1970 to 2001 – I loved the part of the book where Carly moved forward in time 31 years. That particular interval in time involved such a remarkable period of change. People had cell phones and computers. There was Google. Carly’s awe and wonder, her wide-eyed innocence at all of it played very well in this story. It was fun to see her come to love so much of what the twenty-first century had to offer.

No Villains – I found it refreshing to listen to this story in which there were no bad guys. I liked almost every character. It was only fate that wreaked havoc on Carly’s life.

Narration – Susan Bennett did a wonderful job narrating The Dream Daughter. Most of the book was told in first person by Carly, a woman from the Outer Banks, and Bennett’s light Southern lilt was perfect. Her pace and inflections made listening a pleasure.

An IMPOSSIBLE Turn & More – (Here is where I’m going to give something away. I have to!) Three major events The Dream Daughter pivoted on all defied logic, and one especially I found almost unforgivable. No one who was more than 10 or 12-years old on September 11, 2001 would ever forget the horrors that struck NYC on that date. Yet, Hunter, 15 in 2001 and a man who’d had months to consider what that date might mean to a rather naïve time traveler, somehow forgot. People just don’t forget 9/11 and especially not well-educated, highly intelligent physicists. Hunter’s oversight as a catalyst to this story was the turning point in my feelings about The Dream Daughter. Sadly, another ridiculous decision towards the end of the book almost topped Hunter’s faulty memory.

Carly – I had sort of a love/hate relationship with Carly. At times I liked her a lot, but at others her innocence and naivity got old. It felt like Chamberlain used that as a crutch through too much of the story, but even worse, she was inconsistant with it and that threw me off. I grew increasingly irritated with the character and by the end of the book I didn’t much like Carly.

Saw It All Coming – I saw the end by the midway point. It was just too easy.

I really wanted to love The Dream Daughter as so many others have and in many ways I did enjoy it. I always looked foreward to listening and took a few extra walks just to get more time in, but in the end I was left disappointed. For me, accepting the the time travel and certain other minor oddities was the easy part. What I can’t let go of are the actions of three different characters that just didn’t fit. Chamberlain used those to force her story toward a neat and tidy ending, that for me was a mess. Grade: B-