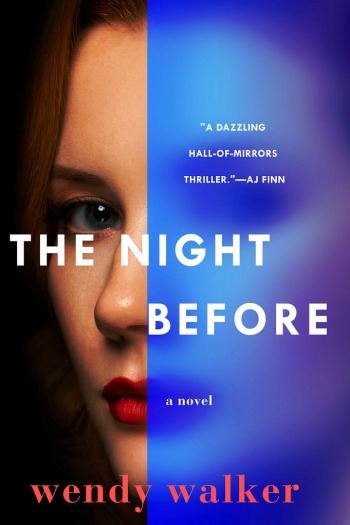 A young woman with a history of bad relationships tries again with disastrous results.

“Laura Lochner has never been lucky in love. She falls too hard and too fast, always choosing the wrong men. Devastated by the end of her last relationship, she fled her Wall Street job and New York City apartment for her sister’s home in the Connecticut suburb where they both grew up. Though still haunted by the tragedy that’s defined her entire life, Laura is determined to take one more chance on love with a man she’s met on an Internet dating site.”

The Night Before is Wendy Walker’s third novel, all being thrillers with some sort of psychological twist to them. I enjoyed her first two, All Is Not Forgotten and Emma in the Night, so was very much looking forward to her latest. Unfortunately, for me The Night Before just didn’t deliver the way the other two did.

My biggest disappointment was with the book’s central character, Laura Lochner. She was a woman in her late twenties who had never been lucky in love, and after her latest devastating break-up returned home to the comfort of her older sister’s house to lick her wounds. Her obsessive desire for love drove her toward Internet dating after only a few weeks. From the moment Laura’s first date began, she became more and more pathetic to me, until I reached a place where I actively disliked her. Walker did an admirable job trying to piece together a backstory that could explain Laura’s actions and her unrelenting indecisiveness, but for me they never quite added up. Her choices and her crazy “self-talk” disappointed me over and over.

The supporting characters, Rosie, Joe and Gabe, Laura’s sister, brother-in-law, and childhood friend, I found more likable and certainly more reasonable, but they were all so deeply enmeshed in Laura’s life, that I easily guessed the ending’s major “twist.” In addition, one of the more minor twists felt like a bit of a cheap trick. While The Night Before was definitely an easy, fast book to read, in the end it just didn’t deliver on the psychological or the thriller. Grade: C-

If you’ve never read Wendy Walker you might try instead: