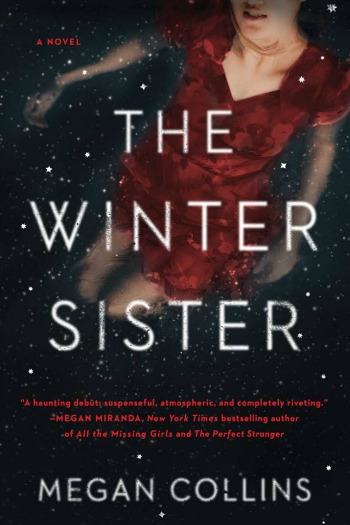 Only fourteen when her older sister was murdered, Sylvie has never let go of her own guilty part or given up on finding Persephone’s killer.

Sixteen years ago, Sylvie’s sister Persephone never came home. Out too late with the boyfriend she was forbidden to see, Persephone was missing for three days before her body was found—and years later, her murder remains unsolved….The Winter Sister is a mesmerizing portrayal of the complex bond between sisters, between mothers and daughters alike, and forces us to ask ourselves—how well do we know the people we love most?

The Writing – Without a doubt the star of The Winter Sister is debut author Megan Collins’ thoughtful writing. I liked her story very much, but even if I didn’t her writing would have kept me engaged.

“Part of me wanted to tell her I didn’t blame her for what happened, to watch the relief slip over her face like a veil, to see her smile come shining back, but another part wanted to stay in that moment, where someone was taking responsibility for the ragged loose ends of my life.”

Not many seasoned authors can so easily slip into characters heads and share what they’re feeling so well. I’m already excited to see what Collins will do with her next book.

A Mother-Daughter Story – The Winter Sister at its core is a novel of suspense, but it’s also much more. It’s a story of secrets and regrets and it’s a story of a mother and daughter, once close but long estranged. After the death of Sylvie’s sister, Persephone, her mother, Annie, took to her bed with bottle after bottle of vodka and never again could be any sort of parent to 14-year old Sylvie. For the next four years Sylvie lived with Annie’s sister, Jill, rarely seeing her mother. In college and her young adult years that pattern continued, until Annie was diagnosed with cancer and Jill needed a break from caring for her. (Not a spoiler, this happens very early in the book.) Sylvie returns home and a rich mother/daughter story begins. We see the loving relationship they had prior to Persephone’s murder, but even more so the complex relationship they have in the present. Sylvie has so much pain around her mother’s neglect, but watching her suffer breaks her in ways she’d not expected.

“I imagined her attached to an IV bag, her eyes widening with an unspoken fear, and each time, the tenderness I felt for her scared me. It was risky – thinking of her in a way that made her easier to love.”

“I never once considered that the bones of her wrists would stick so closely to her skin, or the shape of her head would seem so alien. I hadn’t thought to equate her illness with something that would vacuum her up inside.”

A Usual Premise – The premise of The Winter Sister is a well-worn one: someone is murdered, others hold secrets, some feel guilt, years later new information comes to light. I think with thrillers there are only so many ways to go, so we often see similar plotlines. The real question is how well did the author deliver their take on the idea and I think Megan Collins did it very well.

Lies – Much of the story had to do with lies, or half-truths that Sylvie had told to her family, the police and later her best friend. It was a bit of a stretch for me to believe her reasoning for not being more honest.

Surprisingly (even to myself) I really liked this book. Yes, it has sort of a typical plot for a suspense novel, but I don’t read a lot of that genre, so for me it was unique enough. I didn’t find anything a shocking twist, but also didn’t have to overlook a lot of wild plot turns. And best of all, the writing was so strong it made the story even more pleasurable. A solid read! Grade: B

Note: I received a copy of this book from Atria Books (via NetGalley) in exchange for my honest review. Thank you!