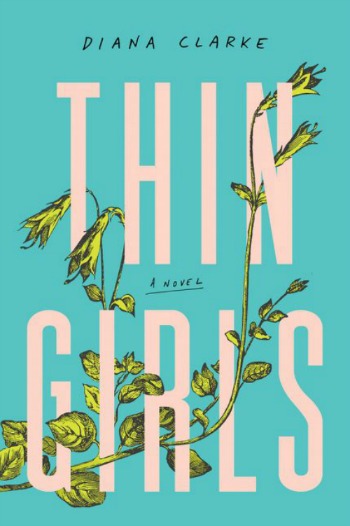 Twin sisters Lily and Rose have an extremely close bond, but as Rose loses more and more weight, Lily gains, and alike no more, they drift further and further apart

“Rose and Lily Winters are twins, as close as the bond implies; they feel each other’s emotions, taste what the other is feeling. Like most young women, they’ve struggled with their bodies and food since childhood, and high school finds them turning to food—or not—to battle the waves of insecurity and the yearning for popularity. But their connection can be as destructive as it is supportive, a yin to yang. when Rose stops eating, Lily starts—consuming everything Rose won’t or can’t…”

Before I get into my thoughts on Thin Girls, I need to issue a warning. This is NOT a book everyone should read. If you have a history of eating disorders and especially anorexia, you should know there will be MANY triggers in the book and even this review.

However, I enjoyed Thin Girls very much. It’s the story of twin sisters, Lily and Rose, very close as twins often are. In their teens, Rose felt like a bit of an outsider, until she started getting thinner and thinner and suddenly became part of the popular crowd. As Rose lost weight, Lily gained and became the outsider.

“Anorectics experience extreme weight loss. But you lose more than that. Hair, fingernails, teeth. You lose your friends, family, yourself. You lose your sense of the world. Of what is important beyond the non-eating. And, eventually, you lose it all. She’s greedy, anorexia is.”

Rose narrated Thin Girls, providing a very unique perspective. Debut author Diana Clarke did a thorough (and eye-opening) job of portraying Rose’s relationship with food and starvation. As the book opens Rose has been in a treatment facility for nearly a year, and has learned all the tricks to appear as if she’s maintaining her weight. Only when she realizes Lily may be in trouble and need her for a change, does Rose take the steps she needs to be released.

I enjoyed the twin relationship in this story and appreciated that Clarke not only explored the close bond, but also the toxicity, especially for Lily. I thought Rose and Lily’s parents were painted in too broad of strokes, making them sort of non-characters. They were just too flat and difficult to believe. There were also a few tangential aspects of the story that felt a bit contrived, but I cared enough about the twins to roll with it. I’m glad I did because those were minor flaws compared to the rest of the story and the commentary on society’s judging of women’s bodies. Plus, I really liked the ending. Grade: B+

Note: I received a copy of this book from Harper (via NetGalley) in exchange for my honest review.