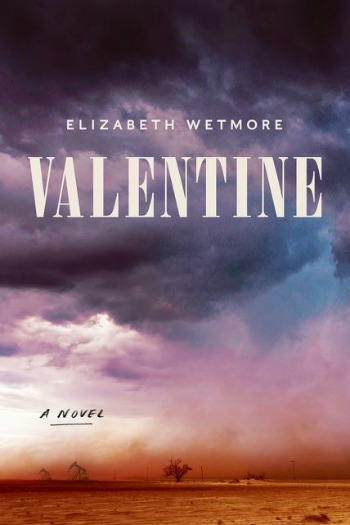 Before the brutal rape of a 14-year old girl, the women of Odessa, Texas knew they were on the losing end of any battle between the sexes, and after, not much was different.

It’s February 1976, and Odessa, Texas, stands on the cusp of the next great oil boom. While the town’s men embrace the coming prosperity, its women intimately know and fear the violence that always seems to follow.

You know that pleasant feeling you get when you start reading a new book and you realize the writing is just plain great. That’s the first thing that stands out with Elizabeth Wetmore’s wonderful debut, Valentine. I highlighted passage after passage as she painted vivid images of the dry West Texas landscape, and the rawness of life there, especially for women.

“The sky turns purple in the east, then blue-black, then old-bucket slate. In a few minutes it will be stained orange and red, and if she looks, Gloria will see the land stretched tight beneath the sky, brown stitched to blue, same as always.”

Valentine opens just after a brutal crime, the rape of a 14-year old girl. Glory wakes in an oil field, terrified that the man responsible, sleeping it off in his truck, will awaken. Beaten, battered and shoeless, Glory walks through the desolate terrain, to the only help she can see, a house far off on the horizon. In that house is Mary Rose, the pregnant mom of a 9-year old daughter. She’s both horrified and indignant when she answers the door and sees Glory on her front porch, immediately understanding what has happened.

“I used to believe a person could teach herself to be merciful if she tried hard enough to walk in somebody else’s shoes, if she was willing to do the hard work of imagining the heart and mind of a thief, say, or a murderer, or a man who drove a fourteen-year old girl out into an oil patch and spent the night raping her….Maybe, but mercy is hard in a place like this. I wished him dead before I ever saw his face.”

I loved Mary Rose, just one of the many women, Wetmore used in telling her story. To be clear, Valentine is about much more than the rape of a young teen. It’s about West Texas in 1976, in the middle of an oil boom. It’s about how desolate that place was and how little it had to offer for women. It’s about standing up, finding a voice, being afraid, reaching out for others, and so much more. Wetmore skillfully crafted a community of women, from girls to widows, who gave voice to the struggles, determination, and hope of the women of Odessa. My sole critique would be that I thought the narratives in the last two chapters lost a little steam. Never-the-less this is a remarkable debut and I look forward to reading more from Wetmore. Grade: A

“None of the girls have ever seen a grown woman cry this hard, not even at a funeral, and they are all too young to recognize it as rage. They are, simply, afraid.”

Note: I received a copy of this book from Harper (via NetGalley) in exchange for my honest review.