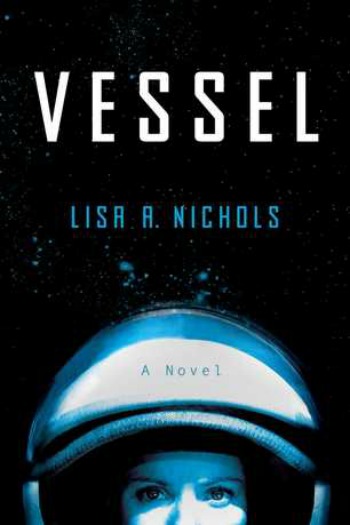 A woman, believed to be dead, returns from nine years in space missing the rest of her crew and much of her memory.

“After Catherine Wells’s ship experiences a deadly incident in deep space and loses contact with NASA, the entire world believes her dead. Miraculously—and mysteriously—she survived, but with little memory of what happened. Her reentry after a decade away is a turbulent one: her husband has moved on with another woman and the young daughter she left behind has grown into a teenager she barely recognizes. Catherine, too, is different.”

There’s much to be said about picking up the right book at the right time and that’s exactly what happened for me with Vessel. I’d just finished a thriller that didn’t really thrill me and I craved a book I could truly get lost in. Thank you, Lisa Nichols.

The premise of Vessel is what drew me in to begin with; the idea of a female astronaut being presumed dead, gone for over nine years, missing huge chunks of time, and trying to walk back into her life fascinated me. I especially enjoyed the parts of the story focused on Catherine’s attempts to reconnect with her husband and daughter. There was ample love to go around, but nine years changes everyone and the family struggled to find some sort of footing.

At the same time, Catherine began waking up in strange places with no idea how she’d gotten there. Colleagues at NASA pushed her to find the memories of what killed the rest of her crew, but the harder she worked at it the more confused she became.

“Something about the entire place made Catherine feel uneasy. It reminded her of the Unabomber’s bunker; all that was missing was a manifesto. And Catherine wouldn’t have been surprised it there was one of those around somewhere, half-written. Something was wrong here.”

I liked this mystery aspect to the story very much, though part of its resolution was also Vessel’s biggest flaw for me. I don’t want to give much away, so I’ll leave it at – a mind-game that seemed way too simple! Despite this and a couple of other minor flaws, the fun and creativity Lisa A. Nichols brought to her debut made Vessel a winner for me. Grade: B+

Note: I received a copy of this book from Atria/Emily Bestler Books (via NetGalley) in exchange for my honest review.