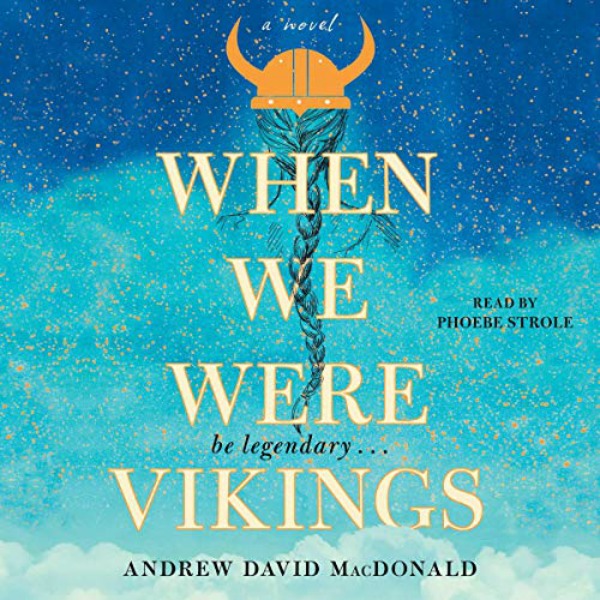 Zelda, born with fetal alcohol syndrome, isn’t your typical 21-year old, but still she’s determined to become a legend and in doing so, save her family.

“For Zelda, a 21-year-old Viking enthusiast who lives with her older brother, Gert, life is best lived with some basic rules…But when Zelda finds out that Gert has resorted to some questionable – and dangerous – methods to make enough money to keep them afloat, Zelda decides to launch her own quest. Her mission: to be legendary. It isn’t long before Zelda finds herself in a battle that tests the reach of her heroism, her love for her brother, and the depth of her Viking strength.”

Listening to When We Were Vikings turned out to be a very surprising experience for me. This is the story of 21-year old Zelda, born with fetal alcohol syndrome and some resulting mental deficits, but generally high functioning. She’s obsessed with all things Vikings and lives by a strict Viking code of conduct. At first, I found all the Viking talk tedious. Surprisingly, at about the two hour mark, I realized I didn’t anymore. It was part of Zelda and by then I’d come to appreciate her quirky charms.

Zelda’s world centers around her tribe which includes her older brother Gert, his ex-girl friend AK-47, and Zelda’s more mentally handicapped boyfriend, Marksie. Zelda and Gert’s mother died when she was young. Gert has always done his best to care for Zelda, often at his own expense. When Zelda comes to understand that Gert is involved with shady figures, she embarks on a quest, using the Viking code, to become a legend and save her tribe. This may sound like a silly premise, but similarly to that in Nothing to See Here by Kevin Wilson (my review), it works. Zelda sees the world much differently than you or I would, but her heart is always in the right place and her journey was both uplifting and inspiring. At times the story felt a little YA, because of Zelda’s differences, but even that quickly faded away for me. I look forward to reading more from Andrew David MacDonald. Grade: B+

Narration: Phoebe Strole is a new narrator for me and one I’ll look forward to listening to again. Zelda tells her own story, so the narrator truly needed to embody the character and Strole did that perfectly. Her expressive reading brought Zelda and When We Were Vikings to life. Grade: A-

Note: I received an advance copy of this audiobook from Simon & Schuster Audio and  Libro.fm in exchange for my honest review.