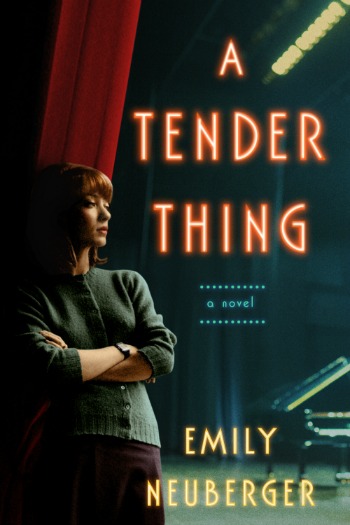 Set on Broadway in 1958, an innocent young starlet and a scandalous new musical collide in this debut novel.

“Growing up in rural Wisconsin, Eleanor O’Hanlon always felt different. In love with musical theater from a young age, she memorized every show album she could get her hands on. So when she discovers an open call for one of her favorite productions, she leaves behind everything she knows to run off to New York City and audition. Raw and untrained, she catches the eye of famed composer Don Mannheim, who catapults her into the leading role of his new work, “A Tender Thing,” a provocative love story between a white woman and black man, one never before seen on a Broadway stage…”

As a young girl Eleanor stumbled into a record shop in the small Ohio town where she lived. Its owner, Pat, was playing a record from a Broadway musical, and instantly Eleanor was hooked. She spent the rest of her youth listening to musicals, reading about musicals, dreaming about musicals, AND fine tuning her own singing voice. When Pat shows her an add in the newspaper about an open casting call in New York, Eleanor sneaks away and takes the train to NYC.

“Eleanor’s love of theater was a flame inside her – she guarded is, and no matter who was cruel to her, no matter how dull her live, the music and lyrics brought joy.”

She doesn’t get that first part, but before long is cast in a new musical, A Tender Thing, being written by Don Mannheim, the composer she most admires. The part might seem a dream come true, except for its controversy. Like so many others, this musical is a love story, but A Tender Thing is groundbreaking in that it’s a love story between a white woman and a black man. As production begins, Eleanor must face her own thoughts on race and revise many of them. Her co-star, Charles is a gentle man, willing to teach Eleanor about not only theater, but what it’s really like to be black in that time. Eleanor learns quickly, but the rest of the world isn’t so accommodating. Controversy swirls around the musical long before it opens, moving from quiet protests to violence, with Eleanor and Charles at the heart of it all.

I enjoyed Emily Neuberger’s debut very much. It was nice to be transported to a different time and to see what it might have been like for the risk takers, braving upsetting the status quo in order to push the boundaries of what love looks like. I especially enjoyed the characters Charles and the play’s director, Harry. Both acted as responsible, mature, realistic adults. Eleanor, I also liked a lot, but I think Neuberger went just a little too far with her naiveté, especially in her relationship with the show’s composer. Right now we all need little escapes, to be transported to a different time and place. A Tender Thing did exactly that for me and I hope it will for you, too. Grade: B

Note: I received a copy of this book from G.P, Putnam’s Sons (via NetGalley) in exchange for my honest review.