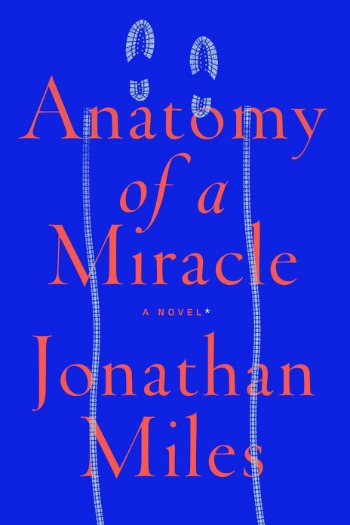 When paraplegic veteran Cameron Harris suddenly stands and walks, everyone wants a piece of his miracle, but all he wants is to understand why.

“In the aftermath of this “miracle,” Cameron finds himself a celebrity at the center of a contentious debate about what’s taken place. And when scientists, journalists, and a Vatican investigator start digging, Cameron’s deepest secrets—the key to his injury, to his identity, and, in some eyes, to the nature of his recovery—become increasingly endangered. Was Cameron’s recovery a genuine miracle, or a medical breakthrough? And, finding himself transformed into a symbol, how can he hope to retain his humanity?”

Documentary Style – One of the things I liked most about Anatomy of a Miracle was the way Jonathan Miles told his story in almost a documentary fashion. The miracle that returned Cameron Harris’s legs to him and its aftermath is told about from some point in the future. The person telling the story has interviewed Cameron, his sister, Tanya, and all the other players in the weeks and months after the miracle. That person is now presenting everything that followed in almost a Dateline type of story. The entire book reads like a really interesting piece of investigative journalism, similar to nonfiction.

Story Grounded in Reality – Miles brilliantly ground Cameron’s story in actual events of the time including Hurricane Katrina, the war in Afghanistan, and more. As the miracle occurred and Marine veteran Cameron suddenly regained the use of his legs, Miles took his story viral on Facebook, Instagram, and various “news” websites.

“By week’s end, the story had been picked up not only by religious websites, such as Beliefnet, GodVine, and the Christian Post, but also by more mainstream outlets such as the Drudge Report, Huffington Post, and Buzzfeed…”

Interesting Cast of Characters – Cameron, grappling to find a reason for being graced by God, while fighting a host of haunting memories is the obvious star of this novel, but he is surrounded other rich characters. Many people laid claim to a piece of Cameron’s story and Miles gifted each with colorful backgrounds that brought them to life. Tanya, his sister, had sacrificed much in her life for Cameron even before his injury. She was a sad, crass, multi-dimensional woman. Vietnamese couple Le Nhu Quynh and Le Thi Hat, owners the Biz-E-Bee market where Cameron’s miracle occurred capitalized on it selling t-shirts and snow globes to eager religious tourists. At the same time, Hat struggled with her strong Catholic faith and questioned Cameron’s miracle. Cameron’s long-time physician, Janice, was the story’s most ardent believer in a scientific answer for his recovery, though she remained frustrated and conflicted in her quest to find one. Most memorable was Griffin, the smooth-talking TV producer who began filming an investigative reality show following Cameron and Tanya in their post-miracle life. Griffin was everything you might expect and more.

“But a villain to my thinking, has to have evil intent or else a reckless and selfish disregard for consequences – and I had neither. I did the best I could with the situation I was given. No there’s a villain here, but that wasn’t me. You see, this is what makes this such a Southern story. The villain was the past.”

Crises of Faith – Hat is not the only one in Anatomy of a Miracle who begins to question his or her faith. Cameron, himself, cannot understand why God gifted him with this miracle. His pill-popping, beer-guzzling lifestyle hadn’t been a shining example for others. More importantly, he knows in his heart that he didn’t even ask God to intercede on his behalf. People constantly ask Cameron to pray for them, but even as he agrees to do so, he’s filled with doubt. He watches the believers in the parking lot of the Biz-E-Bee as they praise God and ask for their own miracles, and Cameron struggles with feeling unworthy. Hat sees these same people and with each passing day, her grip on her own beliefs slips. Tanya fervently believes that Cameron deserves this miracle, but is that faith or love? At the same time, the Catholic Church is investigating Cameron’s miracle as the second for a man on the precipice of sainthood, all based on a prayer chain for Cameron started on Facebook. If it’s ruled a true miracle, will Cameron finally fill worthy? Will others believe? What if it’s not?

Slow Start – This is a book that takes a little time to become fully invested in. It took me until about the 20% mark to really start caring. Up until then, I felt some parts that were drawn out and some seemed unimportant to Cameron’s story. In the end, the parts I doubted did circle back and play a more significant role in the book.

I really liked Anatomy of a Miracle. It was a smartly written story. The journalistic approach really worked in this book and I thought Miles did a wonderful job of weaving all parts together in an unbiased way. I also very much liked the end of Cameron’s story and that’s always an added plus. I highly recommend giving Anatomy of a Miracle a try. Grade: A-

Note: I received a copy of this book from the publisher, Hogarth (via NetGalley), in exchange for my honest review.