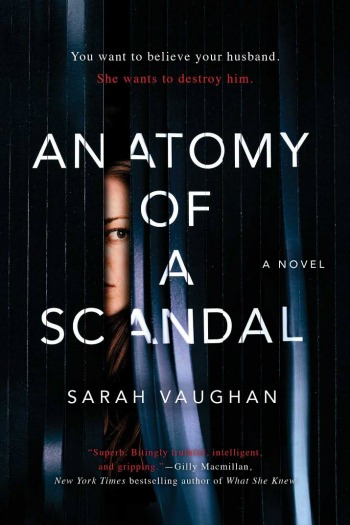 An innocent man or a repeat offender, a brutal attack or consensual sex, a loyal wife and a biased prosecutor all come together in the clash that is Anatomy of a Scandal.

“Sophie’s husband James is a loving father, a handsome man, a charismatic and successful public figure. And yet he stands accused of a terrible crime. Sophie is convinced he is innocent and desperate to protect her precious family from the lies that threaten to rip them apart.

Kate is the lawyer hired to prosecute the case: an experienced professional who knows that the law is all about winning the argument. And yet Kate seeks the truth at all times. She is certain James is guilty and is determined he will pay for his crimes.”

Sophie – For the most part I really liked Sophie. Her life choices might not have been the same ones I would make, but in the situation, with her husband accused of rape, I could understand her fragile loyalty. In no way was Sophie fully behind her husband, yet she had a lifestyle she liked and children she needed to protect.

“Her insides have hollowed out and a potent bank of emotions presses up: horror, incredulity, revulsion, and above all a deep, all-encompassing shame. She clamps her lips tight. It frightens her, this intensity of feeling. Only once before has she experienced anything similar and then it was a shadow of this. She dabs at her eyes with a tissue. Letting her emotions overwhelm her isn’t an option. She has the children to think about and, of course, James.”

Standing behind James was far from easy and Sophie did it in her own way, yet stand she did.

A Timely Topic – I liked the opposing forces in Anatomy of a Scandal. Vaughan took a timely topic and through the women in her novel explored all sides. Kate, the prosecutor, loathed James, and not just for the crime he was accused of. Olivia, the young woman at the heart of the scandal, willingly entered into an affair that quickly disintegrated. Ali, the person who knows Kate best, just might be willing to look the other way for her friend. And of course, Sophie, who struggles, but who might also be willing to turn a blind eye. And such is the reality of scandals.

James – I found James completely disgusting. I understand that this was what Vaughan was likely going for, but for me it was too much. Even after the scandal broke he still lusted for Olivia and made excuses for his poor behavior. His college history was so over the top, that surely, as a man who had run for a public office, someone would have let some his bacchanalian history slip. He was surrounded by women that enabled him to be the man he was and that might be the saddest statement of all.

Slow, Slow, Slow – The plot of Anatomy of a Scandal unfolded much to slowly for my taste. Kate, in particular, had way too much introspection that added little to the story. It was simply too wordy.

One-Dimensional Characters – With the exception of Sophie, I found all the characters to be serving a narrow role: the revengeful victim, the girlfriend scorned, the loyal friend, the creepy man. There was no one I wanted to know more about.

I think the idea for this book was great: both sides of a man accused of scandal. However, in trying to do so much more with this particular scandal, it seemed like the entire idea became diluted to the point where is just wasn’t real and because of that not very interesting. I’d take a pass on this one. Grade: C