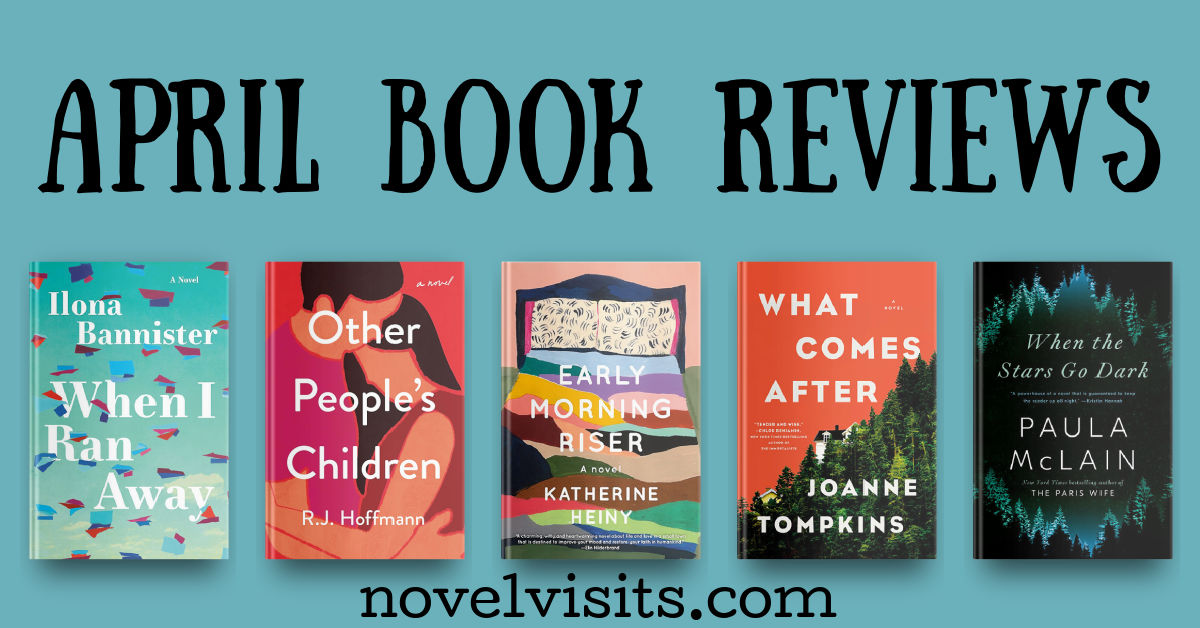 It’s both hard to believe and a sigh of relief that it’s time for April 2021 Book Reviews. I don’t know about you, but I’m happy this month is nearly over. How has everything been going for you? Are you enjoying some sunshine? Did you get your COVID vaccine? I’m now fully vaccinated (YAY!), and in the final stretch of school with just seven weeks left. It still seems almost unbelievable that I will have taught this entire school year online. I’m a pro at it now! Remodeling of my kitchen has hit a glitch and pretty much nothing is going on as we wait for a backordered sink. On the other hand, the bathroom is moving along. Hopefully by this time next month, both will be finished.

April brought some VERY good books! Of the five I’m sharing today, three are right up there for “the best,” another was also top notch, and the last a bit of a disappointment. If you’re interested in audiobooks and some other May releases, stop back on Wednesday when I’ll be sharing four audiobook reviews.

The Best of the Month 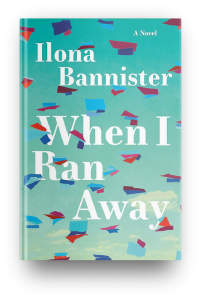 My Thoughts: Gigi first met Harry on a ferry as the two were fleeing NYC in the wake of the plane attacks on 9/11. They were strangers, tied in the events of the day, including the loss of Gigi’s brother. Hours later Harry left. The two lived their own lives until bumping into each other many years later, marrying, and moving to Harry’s London home.⁣
⁣
You might think 𝗪𝐇𝐄𝐍 𝐈 𝐑𝐀𝐍 𝐀𝗪𝐀𝐘 sounds like a love story and in some ways you’d be right, but the book is much more than that. You see, Gigi has long tended to struggle with depression, and living far from home, coupled with a traumatic delivery leaves her with a severe case of postpartum depression. She’s paralyzed in her own life, can’t find the strength to care, and of this, she’s both ashamed and afraid. Gigi is in deep trouble; every day is a struggle to get through. Neither Harry nor Gigi know how to return her to “normal,” to make her love her baby, to make her care about…anything. ⁣
⁣
“𝘏𝘪𝘴 𝘧𝘢𝘤𝘦 𝘪𝘴 𝘳𝘦𝘥, 𝘩𝘪𝘴 𝘥𝘪𝘢𝘱𝘦𝘳 𝘯𝘦𝘦𝘥𝘴 𝘤𝘩𝘢𝘯𝘨𝘪𝘯𝘨, 𝘩𝘪𝘴 𝘰𝘯𝘦𝘴𝘪𝘦 𝘪𝘴 𝘴𝘰𝘢𝘬𝘦𝘥 𝘸𝘪𝘵𝘩 𝘴𝘢𝘭𝘪𝘷𝘢 𝘢𝘯𝘥 𝘵𝘦𝘢𝘳𝘴 𝘢𝘯𝘥 𝘶𝘳𝘪𝘯𝘦, 𝘢𝘯𝘥 𝘐’𝘮 𝘸𝘢𝘪𝘵𝘪𝘯𝘨 𝘧𝘰𝘳 𝘢 𝘧𝘦𝘦𝘭𝘪𝘯𝘨, 𝘣𝘶𝘵 𝘐 𝘥𝘰𝘯’𝘵 𝘩𝘢𝘷𝘦 𝘢𝘯𝘺. 𝘚𝘰𝘮𝘦𝘰𝘯𝘦 𝘦𝘭𝘴𝘦’𝘴 𝘵𝘶𝘳𝘯 𝘵𝘰 𝘩𝘢𝘷𝘦 𝘧𝘦𝘦𝘭𝘪𝘯𝘨𝘴 𝘵𝘰𝘥𝘢𝘺.”⁣
⁣
I was lucky enough not to suffer from postpartum depression, yet I can still appreciate the stunning job debut author Ilona Bannister did with the topic. Her presentation of a woman faced with walking out of her own life in order to find her way through such remarkable devastation was an education. My heart ached for Gigi. This book may be hard for some women to read, but the story is so well written, so well told, that I’m still wondering how Gigi is doing. Grade: A

Note: I received a copy of this book from Doubleday in exchange for my honest thoughts. 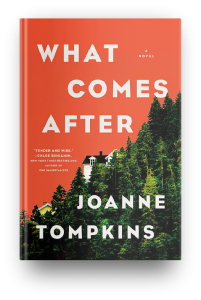 My Thoughts: Let’s talk about the rewards of staying with a book. I’d been looking forward to reading 𝘞𝘩𝘢𝘵 𝘊𝘰𝘮𝘦𝘴 𝘈𝘧𝘵𝘦𝘳 for a very long time. When I finally started reading, I wasn’t immediately drawn in and I felt a little trepidation. It wasn’t the propulsive start I’d expected. Instead the it was a little quiet as JoAnne Tompkins began layering in her characters and their stories. My curiosity about where she was taking her story kept me going and thank goodness for that. By the end of Part 1, I was there; by the end of Part 2, I was totally immersed; by the end of Part 3, I was completely awed!⁣⁣
⁣⁣
This is the story of a pregnant homeless girl who finds herself in the most unlikely of places. It’s the story of two grieving parents who have both lost their teenage sons, one at the hand of the other. ⁣⁣
⁣⁣
“𝘋𝘦𝘢𝘥 𝘣𝘰𝘺𝘴. 𝘐𝘵 𝘸𝘢𝘴 𝘸𝘳𝘰𝘯𝘨 𝘵𝘰 𝘵𝘩𝘪𝘯𝘬 𝘰𝘧 𝘑𝘰𝘯𝘢𝘩 𝘢𝘯𝘥 𝘋𝘢𝘯𝘪𝘦𝘭 𝘵𝘩𝘢𝘵 𝘸𝘢𝘺. 𝘋𝘦𝘢𝘥. 𝘉𝘰𝘺𝘴. 𝘕𝘢𝘮𝘦𝘭𝘦𝘴𝘴, 𝘨𝘦𝘯𝘦𝘳𝘪𝘤. 𝘈𝘴 𝘪𝘧 𝘴𝘩𝘦’𝘥 𝘩𝘢𝘥 𝘯𝘰𝘵𝘩𝘪𝘯𝘨 𝘵𝘰 𝘥𝘰 𝘸𝘪𝘵𝘩 𝘪𝘵. 𝘚𝘩𝘦 𝘱𝘳𝘦𝘴𝘴𝘦𝘥 𝘩𝘦𝘳 𝘩𝘢𝘯𝘥 𝘵𝘰 𝘩𝘦𝘳 𝘣𝘦𝘭𝘭𝘺. 𝘞𝘰𝘶𝘭𝘥 𝘴𝘩𝘦 𝘸𝘳𝘦𝘤𝘬 𝘵𝘩𝘦 𝘣𝘢𝘣𝘺 𝘵𝘰𝘰?”⁣⁣
⁣⁣
It’s a story of hard truths, personal growth, loyalty, forgiveness, and love in seemingly impossible situations. 𝘞𝘩𝘢𝘵 𝘊𝘰𝘮𝘦𝘴 𝘈𝘧𝘵𝘦𝘳 is beautifully told, covering complex relationships through the voices of three different narrators. Being from the Puget Sound area, I loved its local setting. Some call this book a thriller, but I would not. To me it is more of a very literary mystery, but either way 𝘞𝘩𝘢𝘵 𝘊𝘰𝘮𝘦𝘴 𝘈𝘧𝘵𝘦𝘳 will most definitely stay with me for a very long time. Grade: A

Note: I received a copy of this book from Riverhead Books in exchange for my honest thoughts. 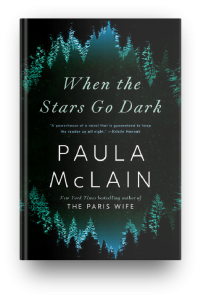 My Thoughts: 𝑩𝒓𝒂𝒗𝒐 𝒕𝒐 𝑷𝒂𝒖𝒍𝒂 𝑴𝒄𝑳𝒂𝒊𝒏! You have to admire an author who steps out of her very successful wheelhouse and ventures into a whole new literary territory. Even more, you have to admire just how well she does it.⁣
⁣
𝑾𝑯𝑬𝑵 𝑻𝑯𝑬 𝑺𝑻𝑨𝑹𝑺 𝑮𝑶 𝑫𝑨𝑹𝑲 is surely considered a thriller by many, but to me it was a wonderfully written literary suspense novel, a sort of sub-genre I’m coming to love. At the core of this story is San Francisco police detective Anna Hart who specializes in cases of missing children. Tragedy has led Anna to flee her life and return to Mendocino, where from age 10 on she found comfort with loving foster parents. She hopes for a  for a time of quiet solitude there, but many skeletons lie in Anna’s closet. Both her recent trauma, and the disappearance of a 14-year old girl in her hometown awaken the ghosts that have long haunted her. ⁣
⁣
“𝘌𝘷𝘦𝘳𝘺𝘵𝘩𝘪𝘯𝘨 𝘴𝘦𝘦𝘮𝘴 𝘵𝘰 𝘴𝘸𝘪𝘳𝘭 𝘪𝘯 𝘢 𝘷𝘰𝘳𝘵𝘦𝘹, 𝘺𝘢𝘯𝘬𝘦𝘥 𝘣𝘢𝘤𝘬 𝘢𝘯𝘥 𝘧𝘰𝘳𝘵𝘩, 𝘢𝘸𝘧𝘶𝘭 𝘢𝘯𝘥 𝘣𝘦𝘢𝘶𝘵𝘪𝘧𝘶𝘭, 𝘈𝘯𝘥 𝘐’𝘮 𝘩𝘦𝘳𝘦 𝘸𝘪𝘵𝘩 𝘪𝘵, 𝘵𝘳𝘺𝘪𝘯𝘨 𝘵𝘰 𝘳𝘦𝘮𝘦𝘮𝘣𝘦𝘳 𝘩𝘰𝘸 𝘵𝘰 𝘭𝘪𝘷𝘦 𝘵𝘩𝘳𝘰𝘶𝘨𝘩 𝘶𝘯𝘵𝘩𝘪𝘯𝘬𝘢𝘣𝘭𝘦 𝘮𝘰𝘮𝘦𝘯𝘵𝘴, 𝘩𝘰𝘸 𝘵𝘰 𝘳𝘪𝘥𝘦 𝘰𝘶𝘵 𝘵𝘩𝘦 𝘸𝘪𝘭𝘥𝘯𝘦𝘴𝘴 𝘢𝘯𝘥 𝘵𝘩𝘦 𝘤𝘩𝘢𝘰𝘴 𝘢𝘯𝘥 𝘵𝘩𝘦 𝘧𝘦𝘢𝘳.”⁣
⁣
For all these reasons and more, Anna cannot stay away from the case. From there, McLain artfully wove together Anna’s past and her present, her sorrows and regrets, her secrets and fears, and her quest to understand and forgive herself. I was mesmerized from start to finish! Grade: A

Note: I received a copy of this book from Ballantine (via NetGalley) in exchange for my honest thoughts. 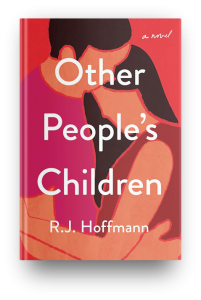 My Thoughts: 𝐎𝐓𝐇𝐄𝐑 𝐏𝐄𝐎𝐏𝐋𝐄’𝐒 𝐂𝐇𝐈𝐋𝐃𝐑𝐄𝐍 is the story of Gail and Jon, a couple whose marriage is on the brink of collapse after three miscarriages, and no luck with adoption. It’s the story of Carli, a pregnant teen who wants a life for herself that looks different from her mother’s. It’s the story of Marla, a woman who thinks she’s being robbed of a grandchild she doesn’t really want. It’s the story of Paige, a social worker trying unsuccessfully to get all of these personalities to work together for a newborn baby girl. ⁣
⁣
It’s also the story of an unexpected choice made by Gail and Jon when Carli has second thoughts about giving up her daughter. I liked almost everything about this book. R.J. Hoffman did a wonderful job with not only all the relationships in the story, but also the question of who a child really belongs to. I liked the elements of surprise and the journey Gail and Jon went through as a couple. I also really liked Carli’s evolution throughout the story. Where it fell down a little for me was in the character of Marla, who was entirely too over-the-top and could have been easily toned down without impacting the story. I was also a little put off by the baby herself. No newborn is THAT easy! Still, I truly enjoyed 𝘖𝘵𝘩𝘦𝘳 𝘗𝘦𝘰𝘱𝘭𝘦’𝘴 𝘊𝘩𝘪𝘭𝘥𝘳𝘦𝘯. It leaves you with a lot to think about. Grade: B

Note: I received a copy of this book from Simon & Schuster (via NetGalley) in exchange for my honest thoughts. 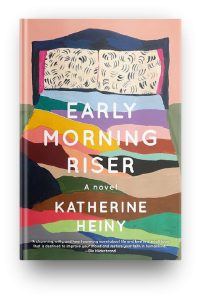 My Thoughts: 𝙃𝙢𝙢𝙢𝙢….I loved the quirky cast of characters in Katherine Heiny’s last book, 𝘚𝘵𝘢𝘯𝘥𝘢𝘳𝘥 𝘋𝘦𝘷𝘪𝘢𝘵𝘪𝘰𝘯, so I was looking to get more of the same in her new novel, 𝐄𝐀𝐑𝐋𝐘 𝐌𝐎𝐑𝐍𝐈𝐍𝐆 𝐑𝐈𝐒𝐄𝐑. In some ways I got that, but in others, I didn’t. Both books revolve around a couple whose personalities seem to be at odds with each other, yet somehow they work. Unfortunately, in 𝘌𝘢𝘳𝘭𝘺 𝘔𝘰𝘳𝘯𝘪𝘯𝘨 𝘙𝘪𝘴𝘦𝘳, the characters may have worked for each other, but they just never quite gelled for me.⁣
⁣
The story follows Jane, a young teacher, and Duncan, the town casanova, as their relationship blooms, falters, and finally settles in. Around them are other players, equally quirky and perhaps a little more interesting. The problem for me was that nothing substantial changed. They got older and there were subtle marks of growth, but they arrived at a snail’s pace. To me, 𝘌𝘢𝘳𝘭𝘺 𝘔𝘰𝘳𝘯𝘪𝘯𝘨 𝘙𝘪𝘴𝘦𝘳 was mainly a story of poor Jane, always adapting to everyone else. She was so very accommodating and that grew frustrating. I did become more invested toward the end, but overall, this just wasn’t the book for me. Grade: C 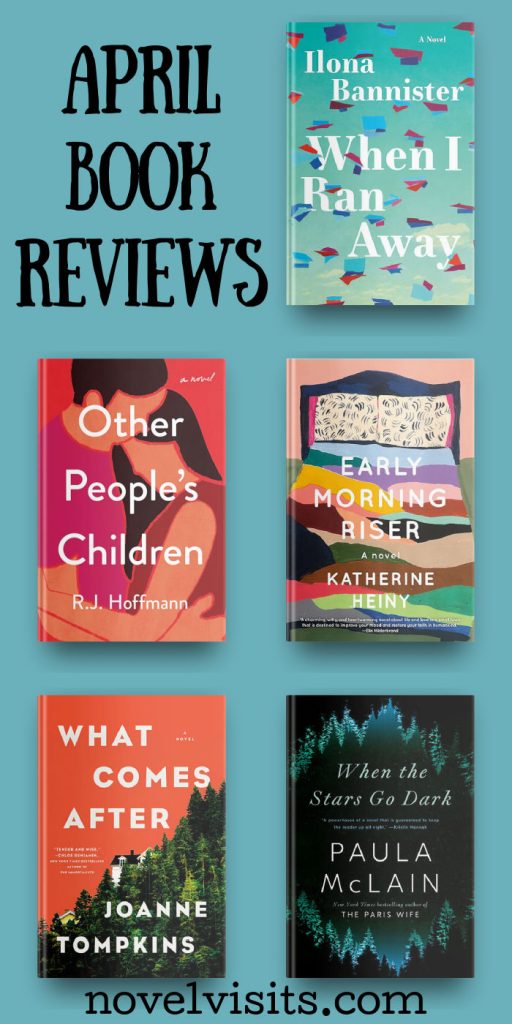