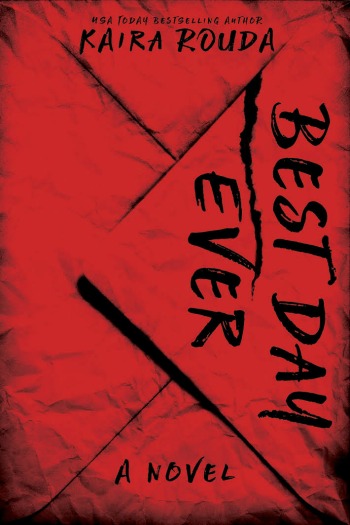 As Paul and Mia head out of town for a weekend at their lake home, Paul hopes to make it their “best day ever,” but right from the start something is not quite right.

“In the bestselling, page-turning vein of The Couple Next Door and The Dinner, Kaira Rouda weaves a gripping, tautly suspenseful tale of deception and betrayal dark enough to destroy a marriage…or a life…Forcing us to ask ourselves just how well we know those who are closest to us, Best Day Ever crackles with dark energy, spinning ever tighter toward its shocking conclusion.”

A Creepy Narrator Speaking Directly to the Reader – Paul Strom proved to be one of the creepiest, most narcissistic narrators ever! From the very first page, you sense that something about Paul is off, very off. You’re just not sure why or how, but as the pages go on the hairs on the back of your neck will start to rise and you’ll know he definitely cannot be trusted. You’ve got to love an unreliable narrator and the fact that Paul is speaking directly to the reader, shaping a story in which he won’t look quite so bad makes him both pitiable and scary. You won’t want to be friends with Paul; you won’t want to ride in a car with him; you won’t really want to hear his slanted take on his life with Mia, but you won’t be able to stop listening.

“I wonder if she is asking me for something, for some understanding. Some type of compassion or empathy. I’m not good at those emotions, or, if we’re being honest, any emotions except anger. Rage lurks deep inside me, ready to lash out whenever it’s needed.”

One of Those Tense Car Rides – Let’s be honest. We’ve all had them. You and your significant other are going somewhere, but right before you leave something happens. It could be one person is running late, or that one had to do ALL the packing, or maybe both of you just had bad days, but as the car doors close, the tension between the two of you is so thick you could cut it with a knife. You know what I’m talking about, right? Well that was the car ride Mia and Paul shared on their drive to the lake. They were both on edge. Paul wanted things to be perfect and little was. Mia didn’t really want to be going, but was irritated when Paul made them late. Throughout the journey, they’d snipe, rally and be nice, and then snipe again. I loved that Rouda used the confines of a car to build so much tension. Brilliant!

Foreshadowing to the Max – In Best Day Ever, Kiara Rouda proved herself to be masterful with foreshadowing. Right from the start you knew things weren’t going to end well for someone, but the puzzle of what had happened still needed to be solved. She layered on the mystery of who Paul was and how he got that way, giving the reader hints along the way. She left Mia’s story largely untold, making her even more of a mystery. I found myself jotting down notes as to where I thought her story was headed. Sometimes I was right, but other times wrong. I liked that Rouda gave just enough to keep me engaged and wanting more.

Slow Middle – I really liked most everything about Best Day Ever, but did find it a little slow in the middle. After the car ride, I would have liked to see the pace pick up a bit.

I read Best Day Ever in a single day, which I almost never do. That alone says a lot about Rouda’s book. It had that can’t-put-down quality to it that was a breath of fresh air in my reading life. As a psychological thriller it wasn’t “edge-of-you-seat” tense, but instead more of an edgy jigsaw puzzle. A puzzle that I wanted to finish, so I could know what this creep was up to and why! Grade: B+